What Are Book Sales Telling Us About the Racial Crisis? 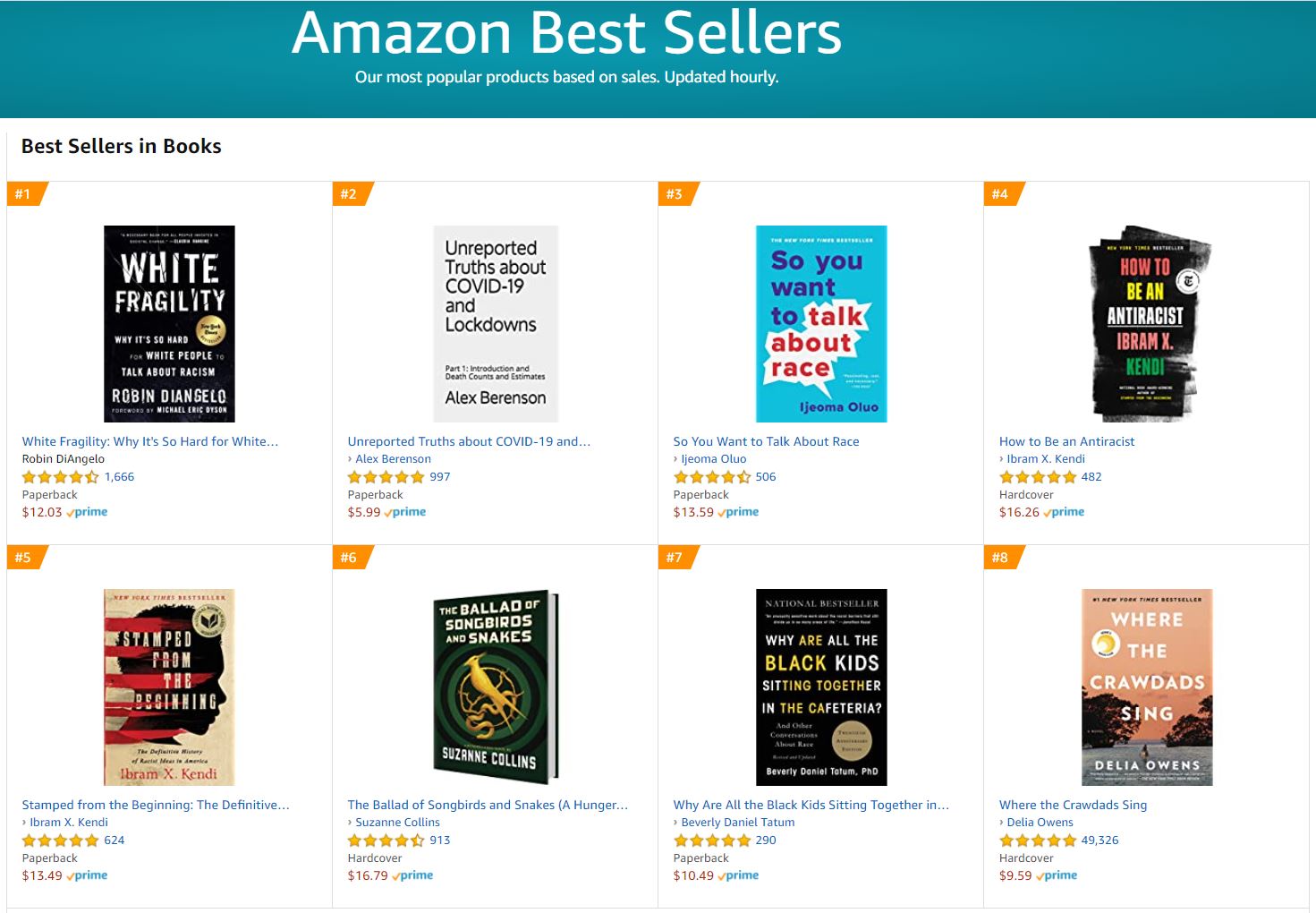 These past few weeks and months have been momentous ones in American history – a pandemic, job losses unseen since the Great Depression, and America's 400-year-old race problem suddenly coming to a head when no one expected it. You might not think to look to the book trade to assess whether changes may be in the making for this nation's most intractable problem - race – yet here it is. It may be a sign that non-black Americans are finally attempting to understand what it is like to live on the other side of the divide. What is it that has brought out the crowds seemingly everywhere, most overwhelmingly peaceful, but not without anger? Here is that hopeful sign.

I looked at the Amazon Best Sellers list in early June, with the streets filled with protesters. What I found surprised me. I haven't looked before, so I don't know what is typically on this list, but I am quite sure it is nothing like this. Four of the top 5 and 10 of the top 15 books addressed race or unequal justice. When have Americans been so preoccupied with these issues? Surely not since the civil rights era of the 1960s if even then. Here are the titles I found on this list and their placement numbers.

1. White Fragility: Why It's So Hard for White People to Talk About Racism. Looks at how basically good white people's inability to look at their own racial assumptions and fears stands in the way of resolving racial discrimination.

3. So You Want to Talk About Race. Similarly addresses the difficulty in talking about or understanding the issues that are hurtful to black people.

4. How to Be an Antiracist. Designed not only to shine a light on racism, but offer solutions to those seeking change.

5. Stamped from the Beginning: The Definitive History of Racist Ideas in America. Examines how racist ideas have been used throughout American history to support unequal treatment.

7. Why Are All the Black Kids Sitting Together in the Cafeteria?: And Other Conversations About Race. Discusses the need to understand our identities to overcome this destructive self-segregation.

9. Just Mercy: A Story of Justice and Redemption. A look at unequal justice, sort of a modern day “To Kill a Mockingbird.”

11. Between the World and Me. A black man examines what it has been like to be black in America and tries to explain it to his son.

13. Antiracist Baby. Introduces both young children and adults to the power of antiracism.

15. The Color of Law: A Forgotten History of How Our Government Segregated America. Describes how the government imposed segregation in residential housing, that it was not a result of self-selection.

Continuing through the Amazon top 50 are many more similar titles, ranging from Sesame Street's Teach Your Dragon About Diversity and All Are Welcome to White Rage and Me and White Supremacy.

What can we make of this? This is way too many best selling books for most buyers to be black. Obviously, we are looking at mostly white people trying to understand why black people are taking to the streets in protest. White people unconcerned about these issues would have no interest in such titles. It seems they want to understand, and perhaps, reexamine their own attitudes. This view is reflected in many voices we have heard, some from unexpected places. Public expressions of examining and reexamining their sentiments have come from atypical sources such as one of the greatest football quarterbacks ever, to the leading NASCAR driver. NASCAR driver! Not long ago, there were more confederate flags than race cars at a NASCAR race. Something is in the air.

Adding one more point of view to the so many already eloquently spoken probably doesn't add much, but everyone needs to speak out if we are to finally end this terrible disgrace to our nation. The solution, particularly in its implementation, is very complex. The basic step, however, is disarmingly simple. We white people need to stop thinking of black people as black, and start thinking of them as people. We will not treat people with the same level of care as our own if we think of them as different. If we think of them as being the same as us, one of us, a part of our extended family, we will no longer tolerate the indignities, from small slights to killings on the street, black people routinely endure. We won't tolerate family being treated this way.

For example, for too long we have accepted killings by police, even if we did not approve of them - George Floyd, Eric Garner, Michael Brown, Tamir Rice, Freddie Gray, Philando Castile, Breonna Taylor, and so many others whose names are fading away, if we ever knew them. Then there are those who were killed by private citizens who faced no consequences, Emmett Till from another generation, Trayvon Martin and Ahmaud Arbery. What if we all became as angry and obsessed over their killings as we are over that of Nicole Simpson? You probably don't remember the names of any of the people who killed those on that list of names, but everyone knows O.J. If only we could relate to the humans behind those other names as we do to Nicole Simpson, I believe we would see some dramatic changes.

Or, take police killings specifically. Undoubtedly, the vast majority of police officers are good people wishing only to serve their communities. We have seen them risking their lives for ours, or doing some more routine good thing, such as helping a stranded motorist, lifting a frightened kitten out of a tree, or helping a youngster of color with some issue they are facing, maybe bullying. Unfortunately, there is a minority that seems to have too much power, perhaps the good officers don't want to take on a fellow officer, or city leaders feel intimidated by the general support police have among the public.

But, here is one thing to remember about the bad. They don't kill or seriously abuse white people. Their victims, like our list of names, are almost entirely black. The reason the bad cops don't attack whites is they know they cannot get away with it. White people would not stand for such behavior, and we have the numbers to enforce our will. So, if we looked at black people more as people than as black, as one of us not one of them, and demanded all people be treated as white people, we could put an end to this in a hurry.

Of course, policing is just one issue. Black and brown people deal with indignities all the time, at grocery stores, restaurants, walking the streets of our towns. They do not have the same opportunities in life. Far more than whites blacks attend lesser schools, grow up in impoverished neighborhoods, try to live down stereotypes imposed on them by others. If you don't believe environment causes personal problems rather than race, the state suffering with the most cases and deaths from the opioid plague is West Virginia, a state that is 94% white but with a disproportionate level of poverty.

Today, we find ourselves at a crossroads. We can do something this time, or again sweep it all under the rug. Our past history has not been good, but there is a sense that maybe this time will be different. We can be the generation that finally resolved to end this blight that has long disgraced a nation otherwise a shining light of freedom and liberty in a dark world. We could become the next “greatest generation.” Then again, we can once more fail to meet our calling. Who are we?