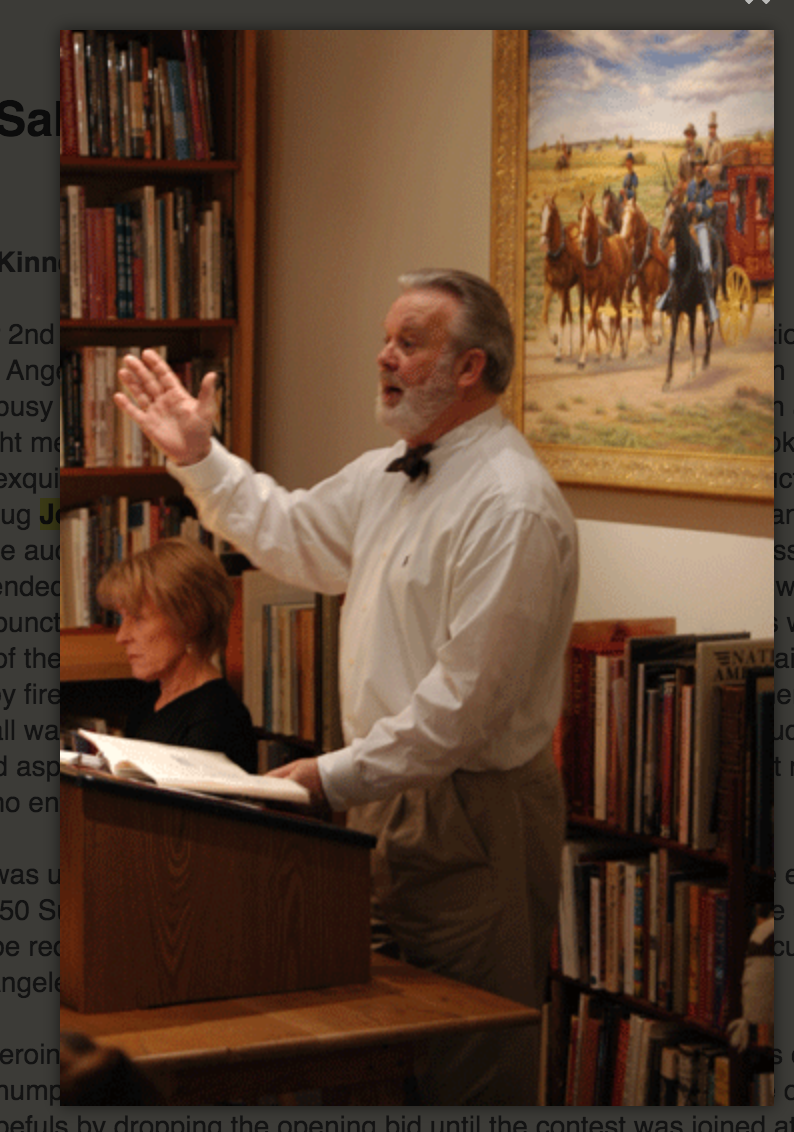 Doug Johns at the gates of heaven

Doug Johns, the auction man, has been reported to have passed away.  I received a call from his daughter but haven’t encountered a confirmation.  Nevertheless, I’m writing a notice as I think there are worse things to happen to the living to learn what others thought of them.  So I hope he’s alive and reading his obituary on Rare Book Hub.  He years ago told me he died several times before, standing at the auction podium, thinking to himself “Lord God Jesus find me a bidder, yes you two sitting on your hands, enjoying my perspiration.”  Auctioneers die many deaths.  That’s the way it is in the trade.

Auctioneers routinely have second and third lives and I met him when he was reincarnated at Johns' Western Gallery in the early days of Rare Book Hub when it was called Americana Exchange.  I interviewed him in 2005 as a green behind the ears writer for the Exchange.  The subject was the first of what would become 3 auctions of the collection of Glen Dawson’s uber-rare California and LA ephemera.

So too do dealers have other lives.  The Dawsons first and foremost were rare book dealers, their collection of ephemera, one part, the result of a lack of an established market for random local paper in the 20th century, and on the other side, Glen’s abiding interest in the minutia of California history.  In this way this material became a significant concentration, becoming a Dawson family collection.

For Glen, Doug was a friend and simply trusted him, while being well aware of the rough patch that left his reputation dinged.  Glen Dawson organized the material and determined to sell the collection at auction.  The choice of Johns' Western Gallery was balanced against his pursing a single owner sale of California ephemera and wanting to consign to a larger house with more reach.  The more established houses weren’t lining up.  Ephemera you say?

I’m sure Doug made some promises and possibly, I don’t know for certain, concessions to close the deal for Glen.  Doug was a promoter.  There was enough material for 3 auctions, invariably the second and third contingent on success.

The first sale was described in AE Monthly December 2005 as,

“An interesting collection of rare Los Angeles imprints and ephemera comes to market on December 2nd in a sale organized by Johns' Western Gallery of San Francisco. The official title is Los Angeles Imprints: 1843 - 1873. This material was accumulated over a lifetime by Glen Dawson of Dawson Books, the firm that recently celebrated its one hundredth anniversary. For fussy collectors of obscuranta this is an opportunity to purchase material that in many cases has been unknown and until now undocumented. Collectors tend to think of books and images when creating a collection but it is the ephemera of an area and period that brings a collection to life. For collectors of Los Angeles, southern California, emerging cities and life in the period, this is an exceptional opportunity to acquire otherwise unobtainable material. The estimates are low.”

Michael Dawson looks back at the decision to have Johns' Western Gallery handle the sales, “altogether, they were modest, rewarding and valuable, as business done and friendship reaffirmed.  For my uncle, it was just right.”

A few years later Doug decamped from San Francisco to Albuquerque and continued to keep his hand in the game, appraising and organizing private sales.

In May 2016 we reviewed a fresh catalogue he issued:  Western Roundup.  He was slowing down, periodically renewing his RBH subscription.  And every year or so I’d call, as is my wont, to check on members.  He was fine although his perpetual 78 rpm was slowing to 45 and recently 33.  Even into sundown, old books and old friends remain relevant and interesting.

His phone is still ringing but he hasn’t been picking up.  These days, like putting bait on a hook, I’ve extended his research subscription, hoping the stories of his death are greatly exaggerated.  When I see the log-ins jump that would be a great day.

Here are the stories we ran on the Dawson sales.