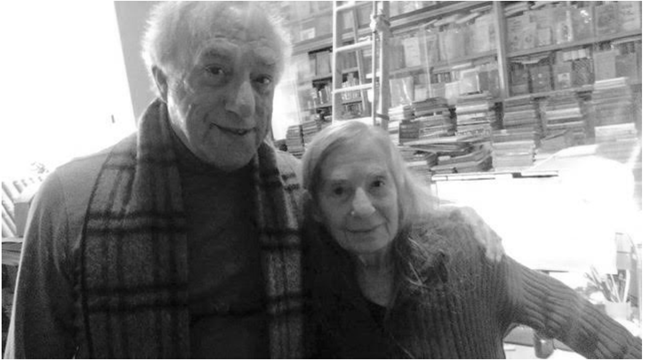 Madeline, the noted dictionary collector and eccentric par supreme, slipped away April 25th, caught between aging and Coronavirus.  Nothing less than two disasters would slow her down.  When passed away she was yet in mid-flight, her life and career on a trajectory to create a collection and database of the history of the ever transitioning meaning of words.  For decades she purchased, one by one, dictionaries in many languages with every imaginable focus, the more the obscure and peculiar the better.

As the “other child” of an astonishingly brilliant family, the sun shone most brightly on her brother Saul, whose career as philosopher carried him across the pantheons of highest education; Harvard, Cambridge, and Princeton and to the rarest of eminence as a or the greatest philosopher of his lifetime.  For Madeline, when young, felt “disappeared” in the intellectual whirlwind her father and brother would swirl around the dinner table in Omaha in the 1950’s.

She was, however, made of the same genes, a beautiful woman, brought her 153 IQ to Barnard to find a way to juxtapose the anti-materialism of her family with her rising feminine sexuality in the 1960’s.  She was an exceptional young woman and brilliant, as awkward with money as she was keen about ideas, in time becoming a bookdealer in the 1980’s living in Greenwich Village.  There she issued a few catalogues, slim affairs, her descriptions succinct, her prices modest, her focus on dictionaries and related materials.  Her exceptional memory gave her an advantage and the field was narrow, some 25 dealers sharing the same focus in the United States and Europe exhibiting at fairs, issuing catalogues and now and again operating open shops.  She was becoming a specialist.

In 1985 Rulon-Miller’s Catalogue 75:  Dictionaries, Grammars and Works on the History of Language structured the field in the United States, much as Maggs Bros.’ Catalogue 891 Dictionaries and Grammars had done in England in 1964.  These catalogues and others influenced her developing understanding of the field as the depth and scale of related materials were becoming apparent.  She was buying and selling, cautious and careful, occasionally requesting time to pay when needed to balance her cashflow.   She had a business and was also becoming a collector.  She became a regular at book fairs, sometimes only having to go a few blocks and occasionally making trips into the New England roundabouts developing sources and friendships.  It was working, the cashflow sufficient, she careful, her equation oddly juxtaposed with her family’s wealth.

For in those years her family had money, although they expressed little interest in it, and even less desire to share it with her.  Her parents were early investors with their neighbor and friend, Warren Buffet, their small investment in time became $25 million, much of which they gave many years later to the Jewish Theological Seminary to restore and renovate JTS’s library tower that was destroyed by fire in 1966.

In 1998 money was found for her to buy a charming 1,210 sq. ft. home in the Village, her material outgrowing her earlier apartment.  There, her inventory simply became her collection, an obsessive’s beautiful obsession.

It’s been my privilege to know serious book people but no one like her, her love of the material was so appealing.  I began to know her then as a member of Americana Exchange.  If I saw material of interest I’d send her emails.  In this way we became friends.  She lived alone, had had relationships but at that point only memories and no children.  In her fifties she was still beautiful but what was so unique was her mind.  Her day-bed in her public room was obscured by piles of books and boxes, with a table nearby stacked with whatever random group of dictionaries and related paraphernalia she was absorbing.

In the evenings she would scour online sites and read recently arrived printed catalogues for material of interest.  By dawn her letters, emails and orders would be released.  Sleep would carry her late into the day, her eyes opening with expectation as the early sundown sunlight would begin to cast late afternoon dusty beams across her living space.  Later yet, today’s arriving boxes and packages would be carried up by the concierge.  It was a celebration and a blur, thirty or forty packages landing on her sill each week.

Among them, once or twice a year, would be taped-up bundles with hand scrawled invoices from Peter Luke, the New Baltimore dealer scout, whose skill has long been to deeply understand client interests well enough to accumulate appealing objects while traversing America visiting shops, shows and dealers, sometimes acquiring 30, even 50 examples for his collectors, knowing Madeline would reward his efforts with a very pleased, “YES, thank you” and a check.

Peter’s packages were particularly complex, but invariably most of the other arriving boxes had their finds and stories too, so into the evening light she would open her treasures and keep them nearby her chair.  Once welcomed and understood she would place them into a section most appropriate.  These objects came in all shapes, ages, and forms although the unifying concept was faithfully dictionary related.

Her first dictionary was a gift from her parents when she was ten that, in time, she came to understand as a conditional document as every definition committed to paper was only ever temporarily firm and fixed, inevitably, invariably each word transforming over experience, use and need.  Her gift was to recognize, understand and remember use of terms and definitions by subject, era, meaning and purpose; she uniquely understood how words freighted with meanings, and implications changed over time.  This was her genius and dictionaries fuel for her intellectual fire.

For her words were fingerprints, her dream that her collection of dictionaries could be single-searched across the full texts of all her dictionaries, believing changing meanings measure the pulse of understanding, belief, social convention and emotion.  She was ambitious, that brilliant girl, that beautiful woman, legs folded beneath a comfortable chair in her lexicological palace, her extraordinary mind contextualizing words and references and seeing and feeling the implications of how changing word use and meanings could populate a forest of related references to create instant Ph.D. theses within her random crackling synapses.  History can be flat but within her spectacular mind words and their uses were always adjusting and flexing.

Her brother was correctly famous, a massive intellect.  She too will be remembered for her mind, astounding memory, and capacity to interleave random definitions and references from the thousands of books she read, remembered and simultaneously compared, understanding words, their purposes and contexts, within her complex word history like a dervish plucking random comparisons from air.

Her life was lived in words as a remarkable student becoming scholar, her mind comfortable with complex nuances.  For her father, a rabbi, his book was the Torah, for her it was the dictionary, understanding that words and definitions printed on the page were unnaturally fixed impressions, each a single kinetoscope frame, preceding hundreds of earlier transforming uses arriving firm and printed seemingly forever, then spooling ahead in a perpetual state of transformation.

It was her magic to follow tens of thousands of words across dozens of languages and dialects, to unearth early and transforming usage, believing that in these histories the true nature of human experience is revealed.

She knew how to do this, in stages, to capture usage over centuries by acquiring dictionaries and glossaries, then reading and remembering each word or term as a single thread, understanding they each together wove complex tapestries seen through prisms of time.

In time she focused on acquisition, her home gradually transforming into a temple of words, literally every inch taken by her many thousands of dictionaries.  And had she lived as long as her parents, her mother 88 or father 100, she would have completed her plan to gift her collection to one or more universities and colleges united in their commitments to highest, linguistic studies.

Fate intervened, leaving mortals to imagine how to build an interactive database of what she collected, that had she lived, she envisioned to become the essential tool to understand language through time, bringing hope and understanding across the planet.

May the angels carry her perspective and ambitions to the hearing and understanding of all open to learn.

The Gifted in Pursuit of the Valued.  Published 1 September 2007 in AE Monthly.

An important Maggs Bros. catalogue issued in 1964 advancing the field in dictionaries, lexicology and linguistics.