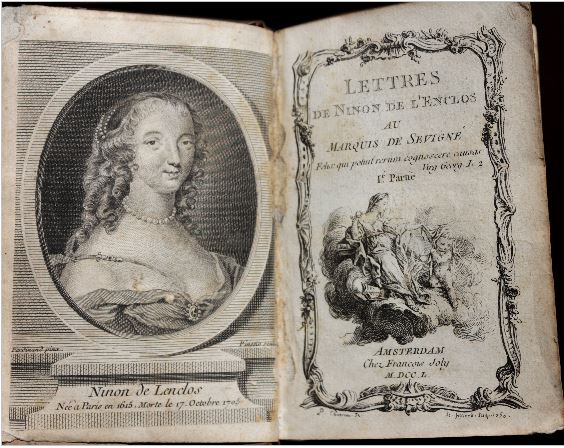 Lettres de Ninon de Lenclos au Marquis de Sévigné (Amsterdam, 1750) is not a very expensive book—a very nice copy is worth around $200. But it is one of those crucial “in-between” books that booksellers often mention when talking about the old books crisis. Books of excellence keep on growing in value, while nobody buys “worn copies” anymore—but “in-between” books represent the most important market share. And they’ve unfortunately lost value during the last decade. But Lettres de Ninon de Lenclos..., has not—because it is a very good and punchy read.

Ninon de Lenclos is the most famous French freethinker and courtesan from the 17th century. Born in 1620, she was only ten when she read Montaigne’s Essays, and only 15 when she lost her parents. “An unfaithful lover but a faithful friend, scrupulous as far as probity was concerned, always cheerful, of a charming company, a straightforward and seducing woman, she had wits without being pedantic (...); she was only missing virtue but she acted with so much dignity, it seemed she was never short of it,” Chaudon writes (Dictionnaire historique—Lyon, 1804).

The first edition of Ninon’s Letters came out in 1750 as a two in-12° set illustrated with a frontispiece and engraved title pages. On the latter, a nice vignette represents Philosophy (as a woman) holding the mirror of truth while and revealing the true face of love. “As Lenclos mostly talked about the metaphysics of love, we thought it the most appropriate emblem,” the publisher explains. In the preface, he also states that Ninon de Lenclos “was a philosopher, but a lovable one.” Another author* (* La Vie de l’Abbé Gedoyn—1745) adds: “Her house in Paris was the hub of all spiritual and polite courtesans.”

A free woman, she was consequently way ahead of her time. She had many lovers including Condé, La Rochefoucault, La Châtre, as well as the Marquis de Sévigné. The author of La Vie de l’Abbé Gedoyn also writes: “The most virtuous mothers did all they could so that their sons would be admitted in such a lovable company.” But Madame de Sévigné was, on the contrary, very worried when she learnt that her son, the Marquis de Sévigné, was having an affair with Ninon—he was succeeding his father in her arms! She wrote to her cousin Bussy de Rabutin about it. This is probably what inspired the anonymous author of this work—oh yes, these are apocryphal letters. Of this we are almost sure. But they are so well put together, and so faithful to Ninon’s personality that “they were regarded as authentic until the end of the 18th century,” Philippe Laroch writes in Petits-maîtres et roués (Université de Laval, 1979). They were later attributed to one Damours—an obscure lawyer—and then to Crébillon Fils, well known for his writings about debauchery. The book was a success—pirated the same year, it was republished several times until the early 19th century, the following editions featuring a biography of Ninon de Lenclos.

These letters sound like they were actually written by Ninon de Lenclos—some still believe they were. If Crébillon Fils did write them—as Voltaire suspected he did—, then this is a masterpiece. His letters depict the true spirit of a woman of character, who knew the hearts of both men and women. She speaks her mind about society. And that’s exactly what irritated people, especially as she was a woman. Jean-Jacques Rousseau, who never knew her, wrote: “Women who lose all decency are the most hypocrites. You never reach that point of debauchery but by letting your vices loose (...). Once the greatest hindrance to a woman’s vice is removed, what is left to hold them back? And what honour shall they seek, once they gave up the one that is naturally theirs?”

So keeping her reputation was the only honour a woman could seek in society? Well, Ninon knew better than that—and she wouldn’t let society hold her back on false pretences. In these letters, she (or Crébillon) elegantly exposes the inelegant practices in society. “Merit lies less in true perfection,” she writes, “than in social conventions. It’s far more advantageous to have the qualities that please the people we need than those that we truly judge necessaries.” She understood that women were second-class subjects. “If my words sound too wise for a woman to you, remember that as soon as I could reason, I compared both sexes to see which one had the best part. I realized that man had treated themselves quite good in this regard, so I became a man.”

Ninon de Lenclos never married. She makes fun at this sacred institution: “For some weird reason, Men find it shameful to follow the natural inclination of both sexes for each other. But they couldn’t do without it. So what did they do? They hid behind spirituality to satisfy their natural needs.” Quoting La Rochefoucauld—one of her lovers—, she states: “How deceitful to himself is the man who believes that he loves a lover for herself.” Love, she (or Crébillon) writes was once a matter of honour—“but nowadays, as corruption has changed everything, love is nothing but a game of moods and vanity.” This reminds us of the famous epistolary novel Les Liaisons dangereuses by Pierre Chordelos de Laclos.

There are striking similarities between Ninon’s Letters and Laclos’ masterpiece that was published in 1782. Both are epistolary works, and they talk about self-pride (or vanity) hidden behind the masks of social virtue—seduction is also dissected and reduced to a sort of social war. In a word, both works expose the hearts of Men. As this scenery never changes, these books are still very modern today. “Most men try to defeat women in cold blood, just to satisfy their fancies, or their vanity,” Ninon writes. “They just want to fill their empty lives of idleness, and to build a sort of reputation on the ruins of ours.” But women knew no better—“What a solitude!” Ninon states about women who refuse to encourage their pretenders. “Even the most virtuous women are motivated by the desire to seduce; they still pride themselves in arousing compliments and adorations.” Thus, they were “being careful not to destroy their hopes, although they know they will never satisfy them.” Love is what French people call “un jeu de dupes”, a fool’s game—friendship alone is reliable. Laclos had obviously read Ninon’s letters and he made good use of it.

The real Ninon de Lenclos died a very old, but still presentable woman. She lived the life of a free woman, which was quite unusual in her time—and she did it openly! “Her real letters were less sophisticated and more delicate, as shown by those published in Saint Evremond’s works,” Chaudon states. But as a great writer once stated, truth sometimes needs the help of fiction to be heard—and when a book achieves such a tremendous task, then it hardly ever loses “value”.