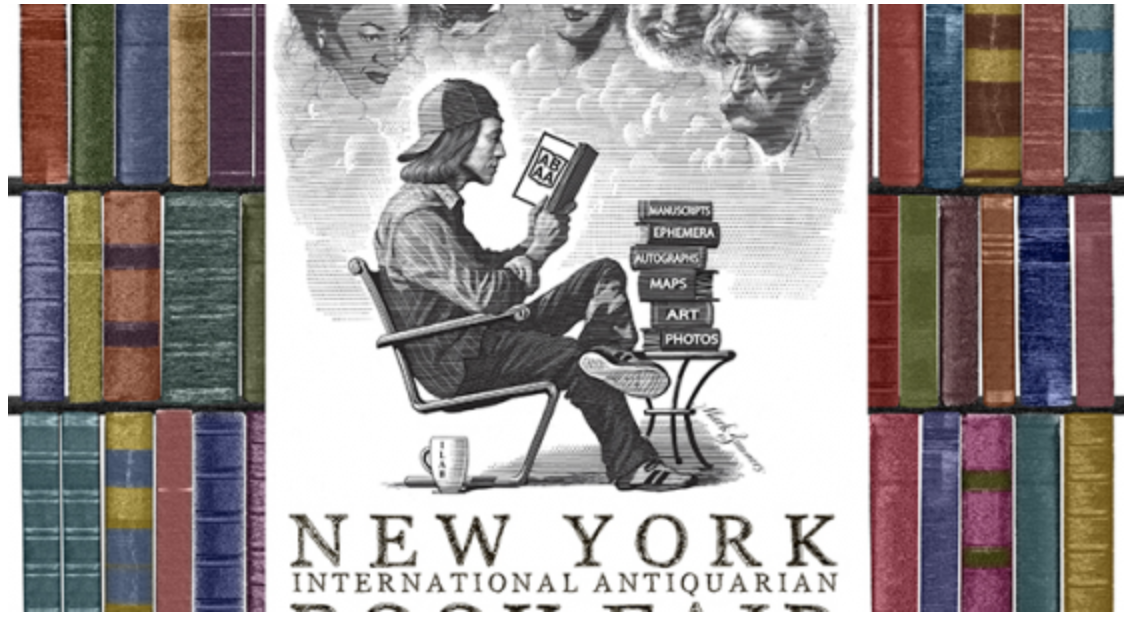 A book fair at the intersection of obsession and health

Booksellers, institutions and collectors look to New York City as the now and again Mecca for the high end rare book, manuscript, map and ephemera trade.  Rightly thought, given their expectations have been reaffirmed for decades, thousands flew, drove and rode to the Big Apple for the important event, The New York Antiquarian Book Fair at the New York Armory, hovering on the edge of Thursday March 5th, preparing for the opening at 5:00pm to the 4-day event pitched as the best for the very best.

Collectors arriving with comped tickets then needed to present passes to be admitted, creating a wavering line of some of the world’s most significant players gently packed perhaps a foot or two apart, perhaps already recipient of the show’s door-prize, the Coronavirus whose cousins once thinned visitors to New York during the Spanish Flu pandemic in 1918-1920, killing 50 million worldwide.

For vectors and victims, a reprise seemed unlikely in the deep arches, martial paintings and soft light, bathing the genteel hail-well-met crowd whose interests, successes and occasional world-class net-worth would not shelter or respect them because of their single unifying characteristic:  age, that the incipient Coronavirus prefers weakness in the lungs of aging and aged.

The only questions for these visitors were who will I see and what staggering printed examples may they, noblesse oblige, flick desultory yeses, across the temporary glass cases dividing sellers’ gems from motivated acquirers, so to carry away a treasure or two before the victorious cross Madison Avenue to Daniel that advertises, “never disappoints,” a scant half block to celebrate bibliographical victories over French wine and cuisine.

These folks, the field’s gold standard, stacked like cord-wood at the Armory would become a science experiment to test intelligence, wealth and viewing habits because Fox was at that very moment parading Trump’s bullshit all clear while MSNBC, CNN and just about every medical professional and foreign leader were expressing anxiety that infection was looming large.

As recently as March 24th 7 attendees at the show have developed Coronavirus, some carrying it to England, Italy and elsewhere.  The likely math suggests a hundred or more cases will trace to the book fair within another month or two as these guests and dealers become unintentional vectors to new victims.

As well, Trump’s fact-less blather broadcast both to New York and distant places quickly caused the Federal government and random state and local governments to hesitate to marshal resources, allowing the ignored pandemic precious time to go nuclear to double its body count every 6 days, expecting 300,000 infections by April 1st and 650,000 in the United States by July 1st..  Now long term mortality is projecting across the human cohort worldwide to decline within two years as 100,000 wheeze in agony as 5,000,000 are infected each month.

But not yet satisfied with the damage and destruction, Trump even now repeats that churches should be jammed on Easter April 4th , where most with their crosses and Hail Mary’s are old, declining, aged and vulnerable - to be packed as sardines, while Texas Lieutenant Governor Dan Patrick, 2016 Chairman of the Trump Campaign in Texas, recently called those of age 70 and above expendable.

Today infections in the United States are projected to reach above 140 million Americans and visitors in a matter of years even as Trump encourages the Fox faithful to play vector and victim, his new board game.  The vast majority will recover and gain incremental immunity.  Vaccines being hypothesized and alternative medicines may mitigate.  We’ll need both because the average age of those in the line at the New York Antiquarian Book Fair was north of 60 too, that anecdotally is when the possibility of death from the Coronavirus rises from .00001 when the victim is young and healthy, while, above 60 the expectation is 1/100 to 70 to 3/100 to 6/100 in 80.  In other words the greatest advocates of the extraordinary field of collectible paper may too be swept away.  Who knew TV would kill.

While the crisis is cascading, I would like to see a plaque on the Armory walls, both outside and in, honoring these victims, that the voiceless do not go nameless.  They came so recently here with high expectation, in love with the material, and certainly in love with life.  That they were damaged by a lying president they too should demand he too pay at the ballot box.  To do so, at every county, town or on random city corners a plaque on such places may remember they who passed, as was once called Potter’s Hill, those places of random memorial should be called Trump’s Hill, as reminders that stupidity, incompetence and indifference are stealing the human spark that animates life.