Holbach and Covid-19: Out Of Disorder! 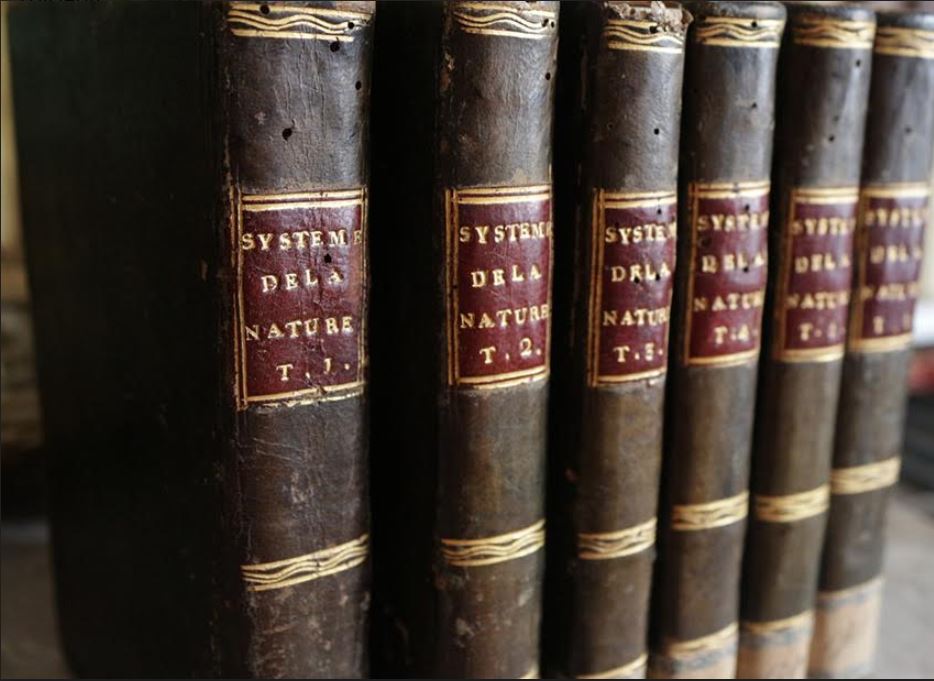 The French government had just ordered total lockdown over the Coronavirus (Covid-19), and I made up my mind to stay positive. Consequently, I ordered a set of books from Como, Italy, which is located in the province of Lombardy—the European epicentre of the pandemic. At first, I thought I might never receive them, but I found them in my mailbox the following day. A few hours later, I learnt that the virus could actually survive up to 24 hours on cardboard. Of course, I had already opened my parcel and started to read—that’s when I remembered The Name of the Rose, a movie in which several monks die in terrible pain after leafing through a poisonous manuscript. Waiting for the first symptoms to manifest, I watched life around me going through unprecedented changes: every non-essential shop closed down, roads got empty and people started to queue in front of the supermarkets. Masks and antibacterial solutions turned into gold. On TV, some people were shown fighting over toilet paper rolls while others celebrated the lockdown, gathering by the hundreds in public places to drink a beer. Social order was melting in front of my eyes.

The book I received from Lombardy is a late edition of the atheist Philosopher Baron d’Holbach’s Système de la Nature (System of Nature). The author tries to demonstrate that Man has always mistaken natural causes unknown to him for God. The original edition came out in 1770 under the alias Mirabaud (and it was burnt on public squares a few months later), but my copy is a 6-in 18°-volume set, published in Paris, Year Two of the French Republic—1794, that is; during one of the main fascinating periods in French history, the Terror. In those terrible and dreadful times, blood didn’t have time to dry on the blade of the guillotine, and it is part of our collective psyche. Every French kid grows up wondering: What would I have done? I guess confinement is a global historical event as well; the type you’ll tell your grandchildren about—providing you survive. We are one as a nation again—and it is no choice. As a matter of fact, the title pages of my set of books read: La République Françoise Une et Indivisible—The French Republic,One and Indivisible. I had read this revolutionary formula with admiration on a few public buildings before, but never had I felt it in my flesh. And the more I read this book, the more I have the disturbing feeling that it is perfectly relevant to my current situation—different times, same people... ever.

Holbach states that Nature is a myriad of constant movements. Effects we do not understand through our only channels of understanding, senses, yet have a cause somewhere, sometimes. “In the dry plains of Libya,” he writes, “a storm might be preparing, which, carried by the winds, will hurt us and influence the passions of a man who might decide the fate of several nations.” The butterfly effect? Just like an idiot eating up a pangolin in a remote part of China ends up with the confinement of the whole of Europe? “Nature is nothing but a long chain of causes and effects. Because they’ve ignored the true ways of Nature; because they’ve despised reason; because they longed for wonders and supernatural; because they’ve been afraid, mankind has remained in the state of infancy.” Is he talking about people who, threatened by a worldwide pandemic, fight over a toilet paper roll? Anyway, the Coronavirus has caused worldwide disorder—well, in our manly point of view; but just like everything else in Nature, the virus “acts according to its very essence.” Pollution, ultra-capitalism and a rogued notion of progress are just a chain of causes and effects that inevitably led us to this situation. But does the Coronavirus really come from pangolins? Or is it the effect of a Machiavellian conspiracy?

In front of unknown phenomena, Men lose their senses, looking for any explanation. “That’s when call upon our imagination,” Holbach confirms. “But this imagination is driven by fear and becomes a suspicious guide, giving birth to chimaeras or dubious causes—hence all our religious misconceptions. Unable to find the true natural causes of fearful effects, men build imaginary ones that drive them to madness.” There was this guy on Facebook, telling us that the Coronavirus was a Chinese biological weapon designed to start WWIII. It was spreading in the air, hence the rapid contagion. Another one claimed that one of the most prestigious French medical institutes had registered the virus a few months ago to generate millions. And what about the dozens of thousands of foreign soldiers debarking in Europe at the same time? In front of so many scaring and varied effects and so little clues regarding their causes, what is left to the common people but trust in their leaders—for what it’s worth today—and personal interpretations?

As a matter of fact, disorder is just a form of order that doesn’t fit our conception of order, Holbach states. Nature only obeys causes and effects regardless of morality—as a matter of fact, pollution has never been so low in the past ten years, the sky is bluer than ever, mother Earth is taking a well-deserved break and fishes are back in the canals of Venice! But if we get over it, shall we learn from the chimaeras of perpetual growth and almighty progress that we’ve been listening for too long? Do we have the capacity to adapt to a new world order? “Everything leads us to think that the human race is a production specific to our globe,” Holbach says. “In case the position of this globe would change, mankind would have to change as well, or to disappear. Indeed, only the structures that can fit themselves into the global entity, or chained themselves to it, can remain. This aptitude of Man to coordinate with the whole gives him the idea of order, and leads him to think that “all is well”, when all is nothing but what it can be; when all is what it must necessarily be; when nothing is either good or bad. You just need to remove Man from his usual stand to make him think that the Universe is in disorder.”

Holbach was a brilliant man. I nonetheless dare say that trying to eradicate imagination from our conception of the world is a mistake—or an effect of his own passion for reason. Mistakes have often placed Man on the path of truth. Let’s hope that the recent mistakes that led us to this terrible situation will do the same, and that fishes are back to Venice for good.