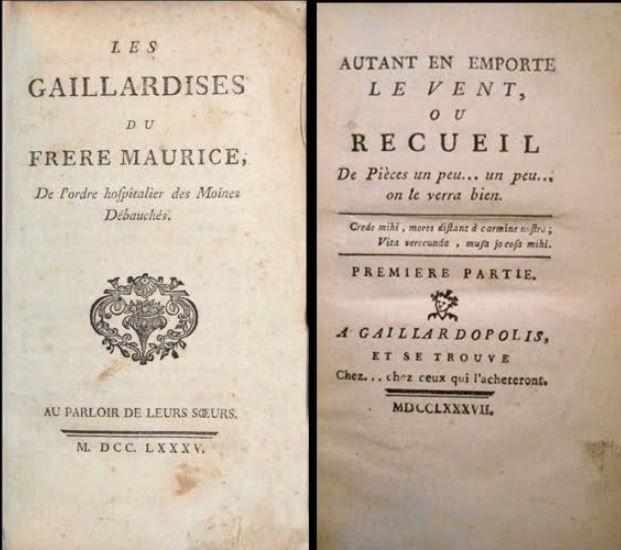 Tell me where you were printed, I’ll tell you what kind of book you are. When printing required a “privilege from the King”, it wasn’t easy to print sulphurous works about politics or loose morals. Those were illegally printed abroad (often in Holland), and then smuggled back to France where they were illicitly sold. Of course, the names of the author and printers didn’t appear on the title page—many printers were sent to prison, some were killed over forbidden books. It was indeed a serious business. To send the police of books on wrong paths, some printers indicated a forged place of publication, usually some remote country populated with heretics—Pierre Marteau, in Cologne; Nourse, in London, Genève, etc. Of course, everyone knew about it. To print a book “At Pierre Marteau’s” was a sure way to attract the attention of the readers in search of uncensored ideas. Then, “places of printing” became a space of liberty and a way to pass some satirical comment. Here are a few examples of the weirdest places books have been printed.

Approbations were from a long religious tradition, as the Church couldn’t stand books challenging its authority. Thus, many pamphlets against religion were printed in strange places, including Hell—such was the case for the Almanach pour l’année du diable (The Devil’s Almanach), in 1737. This one had no privilege, but was duly approved by “Demogorgon, Belzebuth, Satan or Magog...” It was even registered in the “inferno’s library.”

Another book was printed in Hell in 1740, the anonymous Lettres infernales... (Inferno’s Letters...).

And when Pierre Sylvain Maréchal put out his Fragments d’un poème moral sur Dieu (Fragments of a moral poem about God), in 1781, he had it printed it at Atheopolis, the first year “of the reign of Reason”—which was yet to come.

Strange things were happening in the convents as well, as related in Les Gaillardises du Frère Maurice (Father Maurice’s bawdiness), the honourable member of the “the benevolent religious order of the defrocked monks”. Of course, this book was not printed in Paris, but “At their sisters’ parlours”—the most suited place, I guess.

Le Chien après les moines (Dogs Sent After Monks) was also approved by a “bunch of defrocked monks”, who had “just arrived in Holland”—a Protestant country, closest place to Hell on Earth. It was printed “At The Temple of Truth”, and sponsored by “The Quakers”—another bunch of heretics—in 1784. This anticlerical satire, sometimes attributed to Mirabeau, features a passage where a monk forces a young woman to precisely confess her sinful occupations. As Jesus would say: hate the sin, love the sinner.

What was going on at Court had to remain at Court—yet some bold authors told us about it, including about the way to “make it” (Moyen de Parvenir), or to reach your goals. And there was no better place to print this one but “No Where”—it was printed in 100070039.

As far as the satirical La Berlüe, ou nouvelles découvertes sur l’optique (Hallucinations, or new discoveries about optics) is concerned, it was printed in London, At the Lynx’—and it sure gives a good glimpse into the human heart.

La Musique du diable (The Devil’s Music) is another political pamphlet published in 1706. Where? At “Robert The Turk’s”, who then resided on “Inferno Street”, as expected from a Turk.

In 1773, writing a pamphlet against the painter Fragonard over what he considered an ill-deserved honour, Renou printed his Dialogues sur la peinture (Dialogues over Painting) at... Scrawl City.

Another author revisited the history of the French Kings in 1777. His L’Ombre Errante, ou Rêve historique... (The Roaming Shadow, of the Historical Dream...) was printed “In The Atmosphere”, on the printing machine of “The Spirits”—a dreamlike book, no doubt.

Others like the satirist François Gacon had more imagination. His Poète sans Fard (Poet With No Makeup) was thus published at “Freetown”, by “Paul Allegedly-Telling-True” at “The Antique Mirror that Flatters Not’s”.

And the Histoire Des Rats (The History of Rats) by Moncriff was duly printed At Ratopolis, in 1738.

Sex, as always, was leading the march of progress! As curiosa went against good morals, they were forbidden. Les Privilèges du Cocuage... (Privileges of Getting Cheated On) was then published by “John Twit”, at “The Cuckoo’s”, in 1722.

Le Bordel, ou le Jean-Foutre puni (The Brothel, or the Loafer punished), was published at “Push-It Hard”—which is very close to “Oh Yes—I can feel it!”—, in 1773.

La Gazetier cuirassé, or the scandalous anecdotes of the French Court reminds us that this was a dangerous game to play, as it was published “A Hundred Miles from La Bastille” (La Bastille was the royal prison, in Paris), “At Liberty’s”, in 1777.

To publish his Autant en emporte le vent, Recueil de pièces un peu... un peu... on le verra bien (Gone With The Wind, a collection of works a little bit... a little bit... well, you’ll find out), Louis de Boissy went to “Bawdy City”—where else? Foretelling that people would travel there to buy his book, he told them exactly where to find some copies: “In the hands of those who’ll buy it.” We thereby approve his clear indication.

These are, of course, but a very few examples. As we can see, reading will take you places you’d never even dreamed of.