Search Through J.P. Morgan's Private Collection -- from Your Home 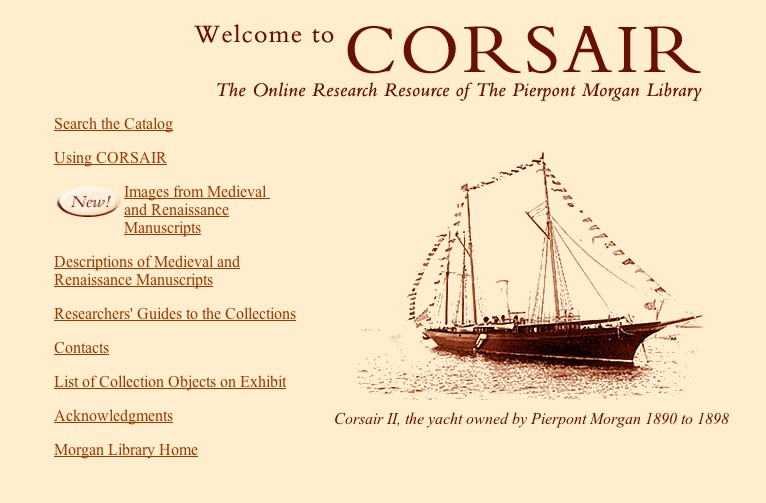 A century ago, one of America's most remarkable men put together one of the most remarkable collections of books, manuscripts and art. He was J. Pierpont Morgan, a name still familiar today, even if many have forgotten why. Morgan was a banker, at one time so wealthy and powerful that he personally financed the United States out of its financial crises (we could use him today). He did the same for Wall Street when it faced financial distress. Morgan formed several landmark corporations, including General Electric, based on Thomas Edison's company, and U.S. Steel, created when he bought out Andrew Carnegie for a cool $480 million (back when $480 million was serious money). In an era when the captains of American industry were at the height of their wealth and power, Morgan was the biggest of all.

Part of that fortune was used to create a collection of books, manuscripts, and art. Morgan collected all types of manuscripts of importance, rather than a limited field. As a result, his collection includes handwritten items from people as diverse as Napoleon, Marie Antoinette, Isaac Newton, Queen Elizabeth I, Thomas Jefferson, Henry David Thoreau, Abraham Lincoln, as well as very old items predating the invention of printing. Printed material starts, of course, with Gutenberg's Bible. It was an amazing collection, but even more remarkable is how the collection has grown over the years, even though Morgan himself has been gone for nearly a century. Morgan created a library to which he gave much of his collection. That library has not only survived, but thrived since Morgan died in 1913. Today, the Morgan Library in New York is a major repository of important cultural works. As a result of a gift of the entire library by Pierpont's son, J.P., Jr., it is now a public institution. Nine decades of additions have increased its collections to well beyond what Pierpont Morgan ever held. And now, this wonderful institution has moved into the 21st century with online resources that would have undoubtedly amazed Mr. Morgan. Among his holdings were railroads, which would have enabled people from the other side of the country to visit his library in just a few days. He could hardly have imagined that in 2005, people from the other side of the world could search his library in a fraction of a second via the internet.

The Morgan Library now offers an online catalogue to its collections, "Corsair" (named for Mr. Morgan's yacht), accessible to all through the internet. Corsair is based on the software used to search other large collections, such as that of the Library of Congress, Yale and Columbia Universities. Today, it can access listings for 95% of the material in the Morgan Library, including books, manuscripts, bindings, and artworks. The search engine is both complex and easy to use. Complex in that it affords numerous ways to search the collection to pinpoint what you seek, and yet it is straightforward and totally intuitive. Corsair was evidently designed for those of us who are unwilling to read instructions before beginning a project. You simply enter the parameters of the material you seek, and in one search, a listing of all applicable items possessed by the library will be generated.