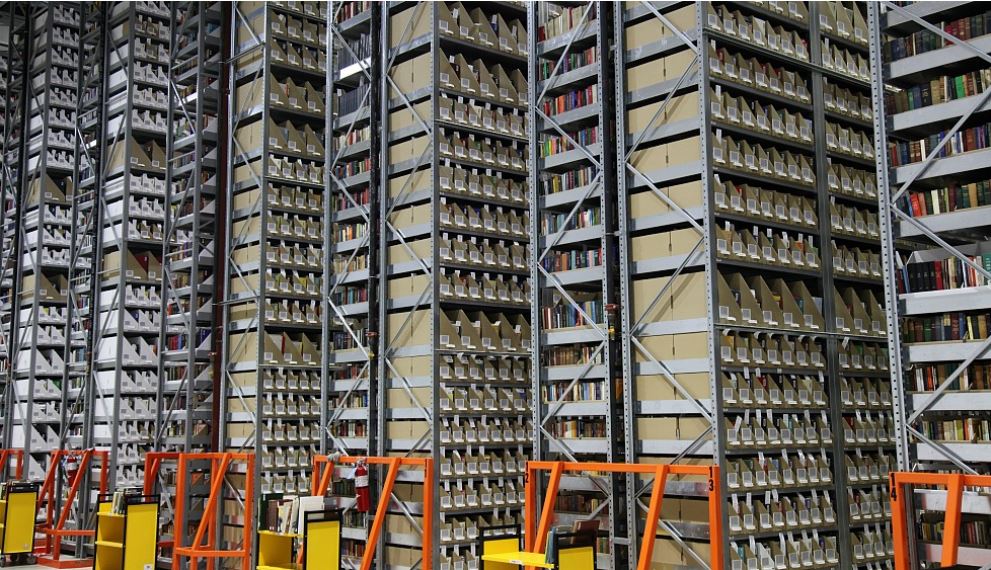 Five Canadian universities have banded together to deal with an issue many libraries face – growing collections of books few if any people ever read. Storage space is limited, particularly as students want more space set aside for computer terminals and other means of access to information. Still, libraries highly prize their books and other printed paper and recognize the need for its preservation and access to it. This program received a bit of added publicity by a recent CBC (Canadian Broadcasting Corporation) article expressing some concerns about it. We will get to that in a moment, but first here is a description of the program to relieve some of the pressures its member libraries are experiencing.

Five Ontario, Canada, universities have come together to create a single storage location for their books that do not receive much use. They are, the University of Toronto, University of Ottawa, Western University, McMaster University, and Queen’s University. The books are housed at the University of Toronto's Downsview Campus. The clever name for this program is Keep@Downsview. The only problem with this name is if you type it into a computer document, it will immediately convert it to a supposed email link.

The Downsview facility consists of “high density” storage. It is designed to hold up to 5 million volumes with expansion possible. The agreement was signed in 2017 and by spring of 2019, it already held 3.3 million volumes. Their website explains that it is designed to hold “important but lesser used print journals and books from the five university libraries.” For example, Western University has defined this as being books that have not been taken out of the library in over ten years, or never at all. This isn't a perfect guide, especially with periodicals as they are generally read in the library, rather than taken out. Some human discretion is needed. An example of such a book might be a 30-year-old textbook, of some historic significance but with little demand for it now. This project enables the universities to keep this material without filling up needed space in their regular library.

Off-site high density storage does not mean difficult accessibility. The universities will be able to quickly obtain material at Downsview. There are two ways. If it's a periodical or single chapter of a book, the item can be copied and converted to a pdf which is sent electronically to the requesting university. For a full book, it will be shipped out, and the members all being located in Ontario, two-day delivery is the norm. The books submitted by each university remain in that library's catalogue so they can still be found as easily as if they were still there. While not in that university's catalogue, items submitted by the other universities will also be available though their inter-library loan protocols.

The costs, after some initial funding, are borne by the five universities. It isn't inexpensive, but is much less costly then maintaining five separate facilities, especially with such things as security and climate control being required.

What, then, are the concerns we mentioned earlier? The CBC article mentioned some reservations expressed by professors at Western University. One concerns what happens to duplicate copies. Books that are duplicated between the universities but are not of much value may be recycled. A professor expressed the view that not all copies are alike, they may have different annotations, provenance, etc. There was also concern that books from a 100-year-old gift to the university would end up in storage, although the library is attempting to keep all of them at home. One professor even raised the issue that shipping books back by truck would raise Canada's carbon footprint.

There is also the issue of convenience. Having the books onsite is easier for users than two-day delivery. It also affords the opportunity to scroll through books to see if they are of interest. However, it should be remembered that these are only books that are rarely if ever looked through, so the inconvenience should be limited. Of course, it would be best if every library could keep every book it has ever had, but resources, in terms of space, finances, and personnel are limited. Meanwhile, the number of books that have been published grows everyday, while alternatives to physical printed material abound. Choices have to be made, and it is sound policy for libraries to take reasonable precautions before draconian choices are forced upon them.