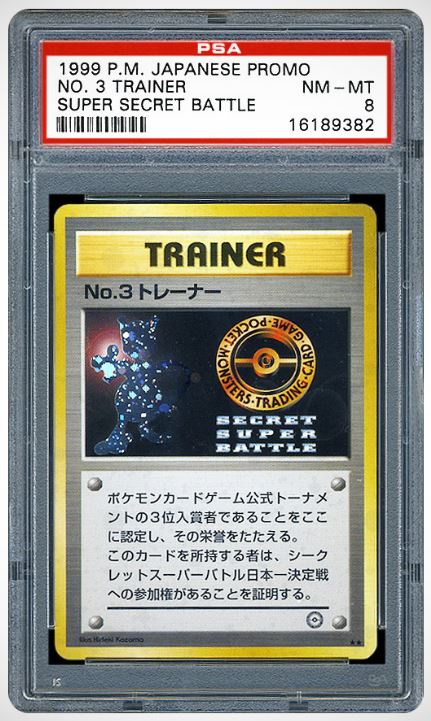 A man has sued a shipping company for losing a highly valuable piece of collectible paper he recently purchased, according to the New York Post. The man's name is Marwan Al Khaja and he lives in Dubai, but the piece was purchased in the U.S. from eBay. The asking price was $85,000, but Khaja negotiated it down to $60,000. The seller sent the piece by insured mail to the terminal of Dubai shipper Aramex International in New York, but according to the complaint, they received the item but lost it. What was that piece of collectible paper? A Pokemon card. Seriously, a single $60,000 Pokemon card.

To be honest, I didn't even know there were Pokemon cards, let alone any valued at $60,000. I knew about the figurines. My children collected them when they were young. The motto of the Pokemon Company is “Gotta Catch 'Em All.” In this case, “catch” is a euphemism for “buy.” Naturally, they would like you to buy them all. The Pokemon Company must have some incredible marketing geniuses. According to Wikipedia, there are now 895 Pokemon characters to catch. Just imagine how much money you will need to spend to “catch” them all. In the case of Mr. Al Khaja, he caught what is evidently one of the most desirable of all Pokemon, but it escaped.

Pokemon is short for Pocket Monsters, and these creatures do something or other in kids' video games, and evidently, adults' games too. We all are familiar with one of their characters – Pikachu. Can you name any others? If so, you know at least twice as many of them as I do. Pokemon was founded in 1995, which is right around the same time that J. K. Rowling began publishing her Harry Potter books. There were some good investments to be made in the 1990s, if only we knew.

There are some very wealthy people living in Dubai and our guess is that Mr. Al Khaja is one of them. He is 38 years old, so he came of age in the 1990s. He may well be the image of the “new collector,” that is, he collects things that were a part of his life growing up. High on that list is comic books. According to the Gulf News, his comic books include a 1930s Archie and the first edition of Archie's Girls Betty and Veronica from 1950. He also owns a first edition of the first Harry Potter book (1997) and the first Ninja Turtles book (1984). Is this guy not the ultimate 90s kid? He estimated the value of his collection at $275,000, but that was almost three years ago and long before he made his Pokemon purchase.

Card collecting is nothing new, and has really come into its own in the past few years. However, the highest value card collecting is concentrated on sports cards, baseball cards in particular. In this past year's list of the Rare Book Hub Top 500 most expensive prices paid for collectible paper at auction, the third most appearances was for Mickey Mantle baseball cards with 9. Right behind him was Babe Ruth with 8. The only two with more appearances than Mantle were the creators of more traditional collectible paper (books), John James Audubon (16), mostly individual plates from his first edition of The Birds of America, and Charles Darwin (10). One wonders whether Darwin would consider spending hundreds of thousands of dollars on baseball cards a sign of advancing human evolution or de-evolution. In 2018, a Mickey Mantle baseball card actually sold for $2,880,000. Al Khaja got off easy.

This may not mean much to those who are not devotees of Pokemon, but the card in question is a 1999 No. 3 Trainer. It is pictured with this article and doesn't look like something I would pay $60,000 for, but what do I know? This card was never sold to the public, but was given out to third place finishers in a 1999 contest in Japan. Not bad for second runner-up/losers. Still, this is not the most valuable Pokemon card. That honor goes to the Pikachu Illustrator card, given to first and second place finishers at a contest in 1998. There were 39 of them printed, but only 10 appear to still exist. Last fall, a copy of this card sold for $195,000.

It is unknown whether Al Khaja's card was simply lost or stolen by someone who realized its value. However, if stolen, like a “missing” Shakespeare First Folio, it will not be easy to sell. Any potential buyer, likely a dealer, will quickly suspect something is wrong if offered a Pokemon card this rare and valuable without a verifiable history.