Americana is a Creed 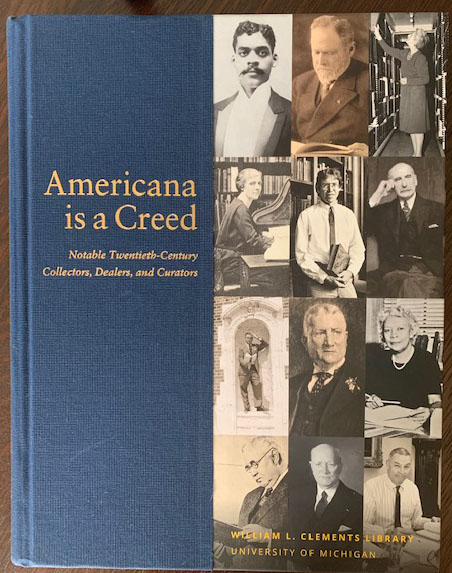 The Clements Library in Ann Arbor, Michigan, founded in 1923 at the University of Michigan holds collections of print and manuscript materials on the history of North America and the Caribbean, with particular strengths in 18th and 19th century American history.  It is an important American institution.  They issue books on an irregular basis and I’m lucky to be reading their most recent, Americana is a Creed, a series of excerpts and essays on many of the important librarians, collectors and dealers involved in Americana.  It’s the second volume of two, the first – The Pioneer  Americanists:  Early Collectors, Dealers, and Bibliographers was published in 2017.

The introductory essay to the recent volume is a gem that weaves the complex threads of collecting into a coherent view on the changing times, themes, and personalities.  The individual pieces are similarly illuminating.

The following persons have been nominated for canonization:

It’s logical, if disappointing, to see Bill Reese on this list.  He belongs, but his death at an early age, injects reality into a list that could otherwise mostly be statues in a museum.  And I’ve written elsewhere of the importance of Wright Howes and Ernest Wessen who bought and sold gems at very reasonable prices.

I can also see places for others who have been omitted. No auction houses?  It’s as if this is a book about the biggest waves in a world that has been transformed by storms, none bigger than Sotheby’s and Christies or persistent than Bonhams and Swann’s.

It’s an interesting group for whom the common denominator is involvement.  To get on that list you needed to be brilliant, well-connected, generous and in few cases, ruthless.  In other words, old books and collectible sundries are simply a particularly beautiful patch on the tapestry of life.

Both volumes are highly recommended.  The first is available online through Oak Knoll Books.  The second volume will probably be offered soon.  And I’ll announce the third volume today, which to make the set complete must tell the stories of the auctions and the contentious battles throughout the 20th century as they shifted from “for the trade” to all with the will, resources and a paddle.