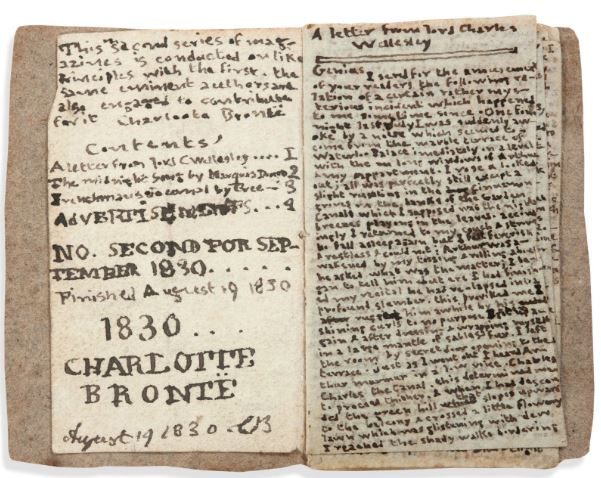 A book by Charlotte Bronte is finally coming home, after passing through the hands of two criminals, 189 years after it was written. The home of Charlotte and her star-crossed sisters is now the Parsonage Museum in Haworth, West Yorkshire. Her father was the Anglican priest of the church.

Charlotte is known for only four novels, one published posthumously, but she wrote many shorter items before publishing Jane Eyre, her first novel. That was in 1847, but this little book (with a big price) was written in 1830. Charlotte was 14 years old at the time.

This story goes back to an evening in 1829 when her father, Patrick Bronte, brought home some toy soldiers for her brother, Branwell. Sisters Charlotte, Emily, and Anne liberated the excess from their brother, so that each had a soldier. They gave them names. Each picked a notable person for their soldier. Charlotte named hers Wellington. Taking the other side, Branwell chose Napoleon. Sisters Emily and Anne named theirs for explorers Edward Parry and William Ross. They then proceeded to create an imaginary world called Glass Town. It turned out that this complex world became more than just a plaything for Charlotte and Branwell. They each wrote stories about it. Charlotte's appeared in the imaginary publication, The Young Men's Magazines. Actually, it wasn't totally imaginary. It just had a short “print” run – one copy for each issue. Naturally, these were manuscript copies in Charlotte's hand.

Recently acquired by the Bronte Parsonage Museum was an issue of the Second Series of the magazine. The cover title simply says September 1830. It is a miniature book, 20 pages folded from five sheets. The size is roughly 1 3/8” x 2 1/2”. Charlotte made up for this handicap by writing in very small, cramped letters, almost like print.

The book consists of three stories. The first is A Letter from Lord Charles Wellesley, son of the Duke of Wellington, her soldier. It recounts an incident worthy of a Gothic novel. The second story is called The Midnight Song, the third and final one is Journal of a Frenchman. In keeping with the appearance of a true published book, the title notes that it is “Sold By Sergeant Tree And All Other Booksellers in the Glass Chief Town Paris Ross GT Parrys GT Glass Town Wellingtons & c & c.” Those were each of the Bronte children's Glass Towns.

The history of the Bronte children is one of immense tragedy. Their mother died when all were quite young. Two older sisters died five years before the close-knit four survivors created their Glass Town stories. Charlotte, Emily and Anne all died within a few years of publishing their successful first novels. Charlotte and Branwell lived the longest, still a mere 31 years of age when they died. Burying a child is one of the worst things imaginable, but Patrick buried all six of his children.

When Charlotte died in 1855, the last surviving Bronte child, her manuscripts passed to her husband, Rev. Arthur Nicholls. They had been married only nine months. Nicholls, an assistant to Patrick Bronte, remained at the parsonage to assist his father-in-law until the latter died in 1861. He then returned to his native Ireland. In 1895, he was approached by journalist Clement Shorter who obtained and published some of the sisters' unpublished poems and wrote books about them. However, he purchased these manuscripts on behalf of Thomas J. Wise. Yes, that is the same Thomas J. Wise, bibliographer, collector, author, and most notably, master forger and thief. He made his money creating forgeries of unknown editions of important books that preceded known first editions. Their value, if real, would have been immense. It took decades before Wise was finally caught. Wise got the Bronte manuscripts for the bargain price of £400, a “theft” in itself.

Wise eventually sold pieces of his collection to a variety of buyers, and when this finally came up for sale at Sotheby's in 2011, they said it “has remained in private ownership in Continental Europe until the present time.”

The manuscript sold at Sotheby's for £690,850 (US $1,070,000). That was a surprisingly strong price considering it was estimated at £200,000-£300,000. That is another story. The Bronte Parsonage Museum had hoped to purchase it then, but was driven off by a buyer that did not mind paying prices for historic manuscripts higher than most people thought they were worth. The buyer was Aristophil, the massive French pyramid/Ponzi scheme that bilked investors out of hundreds of millions of dollars. Gérard Lhéritier purchased the greatest imaginable collection of manuscripts, worth several hundred million dollars. The problem is, he spent a billion dollars to get them, all someone else's money. He accumulated 18,000 investors to his scheme, with promises of 8% interest backed by an enormously valuable collection. He justified overpaying on the grounds that his purchasing the manuscripts for inflated prices would make them more valuable in the market.

Like all Ponzi schemes, it worked until it didn't, and when it didn't, the whole thing collapsed in a heap of rubble. With no money to pay investors who wanted their money back, the government shut down Aristophil and what it once owned is being sold off in what will take years of sales. Charlotte Bronte's book went in the latest sale, held by Aguttes on November 18. It sold for €780,000 (US $873,600). While considerably less than what Aristophil paid in 2011, it was closer to the purchase price than a lot of what Aristophil has been forced to sell off.

This time, the museum was prepared. With the help of the Bronte Society, some generous donors, and crowdfunding, the Bronte Society was able to buy the book. They immediately donated it to the museum. Somehow, it survived all of these years despite having owners like Thomas Wise and Aristophil. It will now be kept with four other such miniature books and other artifacts of the famous Bronte family.