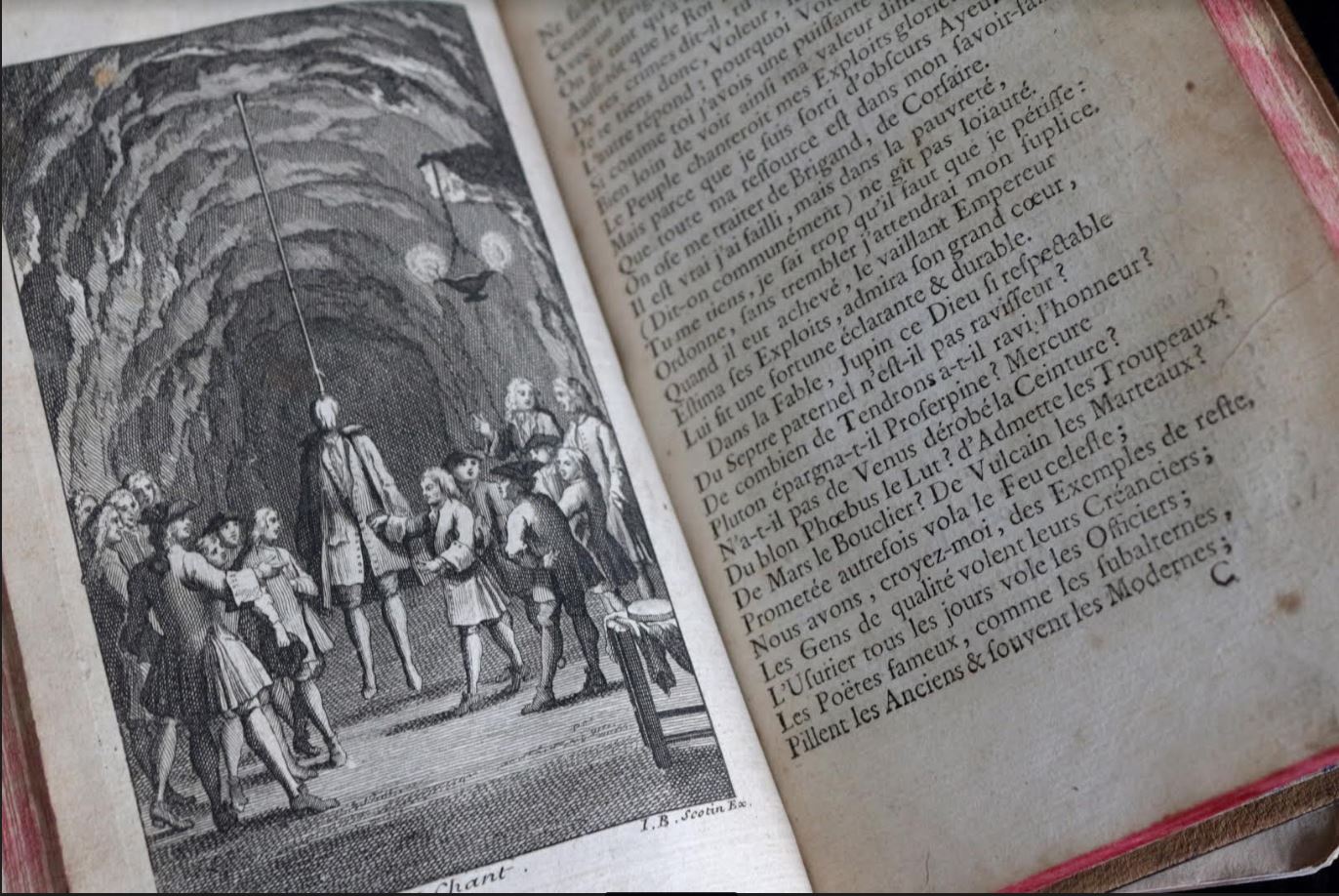 Louis-Dominique Cartouche (1693-1721), the most famous French robber of the Ancien Régime, inspired many writers including Nicolas Racot de Grandval, who published Le Vice Puni, ou Cartouche (Anvers, 1725), an epic poem telling his dramatic fate. It’s been reprinted many times so let’s find out about the first, the pirate and the best editions of this work.

This burlesque poem first came out anonymously but has been credited to Grandval (1676-1753) by Antoine Alexandre Barbier (Dictionnaire des ouvrages anonymes—Paris, 1822). “It was reprinted with the name of the author,” he explains (in the 1760 edition—Pierre Prault). The first edition features a riddle about the identity of the author. The title page reads: “At Nicolas Grand-VEAU”, as well as “available at the Harpsichord’s”—Grand-VAL was a playwright but also a professional harpsichord player. The title page claims that the book was printed in Anvers, Belgium—a fake address, as it was published without “permission”.

The website languefrancaise.net is specialized in French language, including slang. They list not less than 5 editions of Le Vice Puni for the sole year 1725, and 3 more for 1726.

Barbier claims that Le Vice Puni first came in 1723, which is not the case. In 1726, the bookseller Pierre Prault printed an edition with two additional texts, Lettres à M Grandval and Réflexions sur une critique.... The website languefrancaise.net reads: “At the very end of the privilege of these two texts, there’s an allusion to “the former regulations, confirmed by the regulation of February 28, 1723.” I guess this indication, although not concerning Le Vice Puni, is at the root of the myth of the 1723 edition, and that it has never existed.”

Thus, the true first edition was published in 1725, “Á Anvers, chez Nicolas Grandveau, à l’enseigne du Clavecin.” It is an in-8 volume, and it comes with a nice allegoric frontispiece by Bonnart (drawer) and JB Scottin (engraver): it shows justice triumphing over Laverne, the goddess of robbers, as Cartouche is taken to prison in the background. The title pages being identical, the only difference with the second edition (Anvers, 1725) lies in the number of pages—111 for the first and 158 for the second. The slang specialist Yve-Plessis states (Bibliographie raisonnée de l’Argot...—Genève, 1968) that this second edition comes with 13 engravings, and languefrancaise.net reproduces the information—but it comes with the frontispiece only.

The third edition (Anvers, 1725—158 pp) is a counterfeited one. Grandval printed a fourth edition (Anvers, 1725—158 pp) with the mention “Nouvelle édition”, and a fifth edition (Prault, 1726—119 pp), for which he obtained a “permission”. He left it to “Pierr (sic) Prault”, located “Quay de Gresves, Au Paradis”, in Paris. It features a warning about the counterfeited third edition: “A furtive edition of this poem is currently being distributed (he’s talking about the one mentioned above), and it features so many mistakes that their listing would fill a small volume, not to mention the irregular punctuation. Here’s what the reader who doesn’t want to be mistaken must know to make out the true edition that was put together in the presence of the author: 1. You’ll find the names of the drawer and engraver at the bottom of the first engraving. 2. The second verse of the first Chant features the name Cartouche in small capital letters. 3. The font is larger, and it is better printed. 4. The ornaments and the first vignette are fined and more delicate.” R. Yve-Plessis adds that the word “enseigne” in the address “à l’enseigne du clavecin” features a capital “E”—absent from the legitimate one—and that the erratum on the last preliminary page is missing. As far as the “Prault edition” is concerned, he states: “Probably the same than the preceding one (Anvers, 1725—119pp., published without permission) to which a new title page only has been added; indeed, we find the same printing errors.” Pierre Prault, he adds, was already distributing the first editions.

Pierre Prault put out a sixth edition of 167 pages in 1726, and then a seventh one of 119. About the latter, Yve-Plessis wonders: “Another counterfeited edition? The frontispiece by Bonnart is not signed—the 16 engravings are, but they are of poor quality.”

A very intriguing edition came out in 1726. The bookseller had fun creating a fake address for the title page: “Printed at Goodfortune of the Wheel” (Cartouche was broken on the wheel), “Place de Grève” (where robbers, including Cartouche, were executed), “At The Gallows’”. There’s no “permission”, of course; and no engraving except the frontispiece. It has 115 pages (a bookseller has recently listed a copy with 112 pages on the internet), and the slang dictionary is present.

A last interesting edition came out with no date at “Anvers, Nicolas Grandveau (...), At the Hanged Man’s.” It was until today the only known in-12 edition of Le Vice Puni—Brunet mentions one (Prault, 1726) but Yve-Plessis contradicts him, and affirms that there’s no in-12 edition at all. He’s wrong—here it is, and it has 77 pages (no frontispiece). The website languefrancaise.net states: “It seems like the text wasn’t shortened but the printer used a small font to reduce the number of pages. This is probably a cheap edition, like the Bibliothèque bleue‘s (famous collection of peddling books). This ‘Grandveau edition’ could be from around 1725.” While writing this article, I came across another in-12 edition from 1725 (Anvers, Nicolas Grandveau—102 pages)—the said copy is unbound as issued, and has no frontispiece and not dictionary. The title page vignette represents a fruit basket.

The first illustrated edition is the Pierr (sic) Prault’s from 1725 (119 pp), which was printed “with permission”, and which comes with 16 (not 13) engravings—as shown by the copy available on googlebooks.com—I could find no copy with 13 engravings, and maybe there’s a confusion with the 13 Chants of the poem?

Most of these engravings are just ‘entertaining’, but a few are interesting, especially the two ones showing the training of the Cartouchiens. They are exercising in a dark quarry, on a dummy hanging from the ceiling: “Neatly dressed, wearing a blouse, without making it move you had to empty its pockets / Or else rained punches, kicks and slaps,” Grandval writes. Despite some burlesque aspects, his story of the life of Cartouche is very informative. We notice that for some unknown and weird reason, the execution of Cartouche is not represented here.

Le Vice Puni is mostly sought-after today by people interested in “argot” (slang). This is due to its dictionary. “The great success of Grandval’s poem, and all the noise around Cartouche a few years previously,” Yve-Plessis writes, “made “argot” quite fashionable (...). Thus, the arrest, trial and execution of Cartouche can be viewed as the most important factors of the diffusion of “argot” during the second quarter of the 18th century.” Cartouche was executed on November 28, 1721. At the end of the day, engraving or not, permission or not, vice is always punished.

(This table was inspired by the one published on languefrancaise.net)