A Classic Comic Strip is Making Its Return 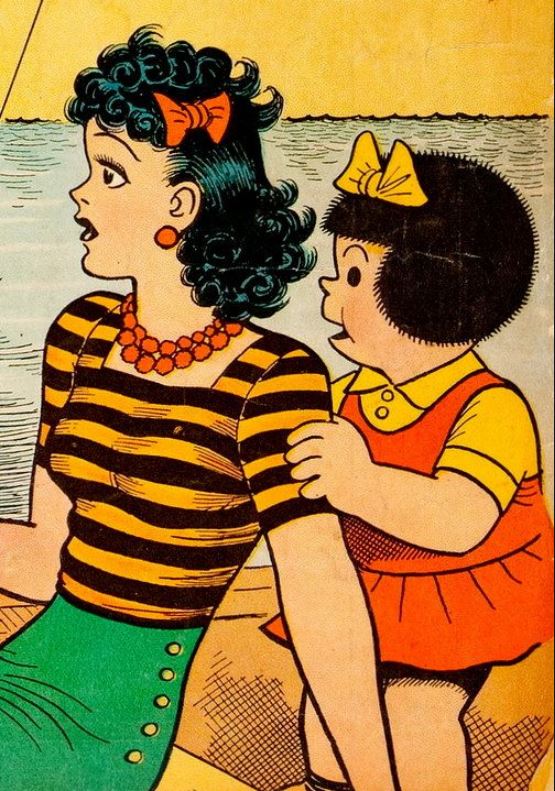 Nancy with her Aunt and guardian, Fritzi Ritz.

There are no superheroes in this comic strip. No one is paying millions of dollars for a copy of her first edition. No one is spending tens of millions of dollars turning her into a super action film. There are no murderous villains, no gratuitous violence. Her life was fairly commonplace, even boring. For decades, she practically disappeared, and whether she will ever regain a significant place in our consciousness is yet to be seen. Probably not, but here she is again, youthful as ever – Nancy!

She may not have achieved anything resembling the status of Superman and Batman, but Nancy has been around longer. She first appeared in 1933. We don't know much about her background. Who were her parents and what happened to them? We don't know. We aren't even sure of her last name. She came to stay with her aunt, but we don't know for sure whether her last name is also Ritz. Aunt Fritzi had her own strip, which is where Nancy first appeared in 1933. Fritzi Ritz was a typical 1920s flapper, her strip first appearing in 1922. Gradually, her role was pushed aside for that of Nancy, who won over the hearts of Ernie Bushmiller's readers. A 1920s flapper was a dying breed by the 1930s.

I used to follow Nancy's adventures when I was young, back in the 1950s. She and best buddy Sluggo were maybe sort of funny, though nothing to put you in hysterics. Still, it was an easy strip to read so how could you pass it by? As the years went on, she pretty much disappeared. I think it was Snoopy who brought about her demise. I'm sure the claim that Peanuts was once daring and edgy will bring more laughter from young people than do the endlessly rerunning Peanuts strips today, but in their time, it was cutting edge. Time has dulled those shears, but it was way sharper than Nancy's genre.

Nancy provided more typical than groundbreaking humor even in her early days. There were gags worth a chuckle, but she was never quite so daring as the mischievous Katzenjammer Kids. She didn't have the distinctive personality of Our Boarding House's Major Hoople. Her stories weren't as compelling as the serial adventures from Gasoline Alley. The latter had characters that actually grew and aged with time, just as we did. This is an aside, but did you know that even Gasoline Alley is still around? I think it appears in something like six newspapers, but it is still with us. Walt Wallet is still alive. His wife, Phyllis, died quite a few years back, but if Walt can hang on a little longer, he will be 120 years old next year. He is the oldest verified living person on earth. He is a bit forgetful these days, but still sharper than many 110 year olds. Are you ready for this? In less than two years, even Skeezix will turn 100. He looks very good for his age.

I digress. Nancy experienced years of decline. Once appearing in 880 newspapers, her circulation dropped all the way to 75. Finally, in February of 2018, Nancy's long run actually came to an end. But, you can't keep a good woman down. Two months later, she popped back up, still as full of spunk as ever. Unlike Walt Wallet, Nancy is still eight years old. As such, she understands modern technology, carries a cell phone, takes selfies, speaks the current slang Walt and I can't comprehend. The new writer/artist is Olivia Jaimes, but not really. That is a pseudonym and “Olivia Jaimes” guards her identity and privacy religiously. In that way, she resembles the reclusive Ernie Bushmiller. She has updated Nancy to fit the times. And now, there is a new Nancy book, Nancy: A Comic Collection. It gives you a chance to meet the new Nancy. Reportedly, newspaper circulation for Nancy has doubled, meaning we probably would be more conscious of her again already if anyone still read newspapers.

For those unaware, there is a website where you can read new comics online – www.gocomics.com – and reportedly, Nancy's traffic has quadrupled. Heck, you can find Gasoline Alley, Dick Tracy, Alley Oop, Annie (without the “Little Orphan”), and many more still there. Ones no longer drawn, like Li'l Abner, have reruns. Old comics, like old soldiers and Walt Wallet, never die, they just fade away.