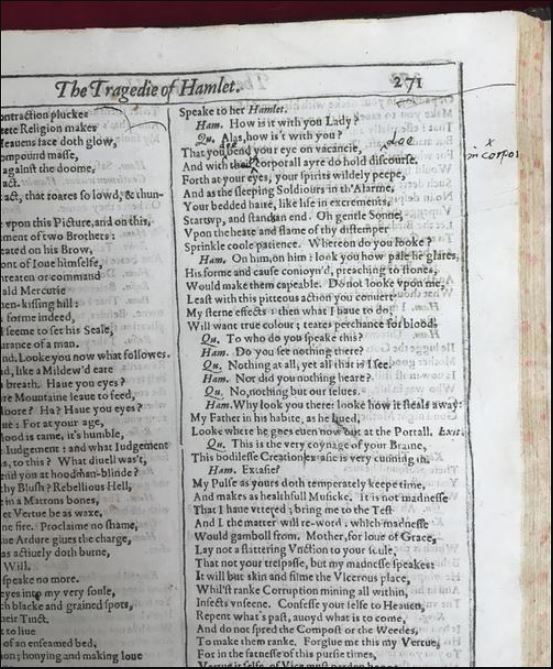 It looks to be one of the most important literary finds in a long time. It may tie together what many regard as the second greatest English poet and writer, John Milton, with the greatest. There is no need to even name the latter. The find has been hiding in plain sight for years, but not everything visible is obvious. It took a moment of inspiration from a lecturer at Cambridge University, over three thousand miles away from the book's location at the Philadelphia Free Library, to discover its secret.

The book is undoubtedly the most important ever in English literature. That would be Mr. William Shakespeares Comedies, Histories, and Tragedies. No one knows it by that name. The first edition is commonly called the First Folio. The next three folio editions, all published in the 17th century, logically are known as the Second, Third, and Fourth Folio. The First Folio was published by several of Shakespeare's friends in 1623, seven years after he died. It's importance cannot be overstated. Half of its 32 plays had never been printed before, and some, including Macbeth, would have been lost forever were it not for his friends' diligence in preserving his works.

The Philadelphia Free Library possesses one of the approximately 235 copies of the First Folio still known to exist. Around 750 copies are believed to have been printed. An amazing 82 of the known copies are held by the Folger Shakespeare Library in Washington with the rest scattered around the world.

The Philadelphia Free Library obtained its copy in 1944. It was a gift from P. A. B. Widener II and his sister, Mrs. Josephine Widener Wichfield, in honor of their father, Joseph E. Widener, who died the previous year. The primary occupation of all three Wideners was being very rich. Joseph's father, P. A. B. Widener I, had made a fortune in public transportation. The Wideners devoted most of their time to racehorses and art, though the fact that Joseph had all four folios to pass on is an indication of the value of his secondary hobby, book collecting. Joseph's nephew, Harry Widener, is one of the best known names in book collecting, not just for his collection but for his (and his father's) going down with the Titanic. Wealth does not guarantee good fortune.

The Widener/Philadelphia Free Library copy of the First Folio has long been noted for its extensive annotations. There are some comments, technical (as opposed to substantive) corrections of Shakespeare's words, and lots of highlighting. The latter indicates what the annotator thought was important. However, one thing that remained a mystery was the identity of the person who made the annotations. There was no reason to think the person was of great importance anyway.

That all changed a few days ago. Claire Bourne, an Assistant Professor of English at Pennsylvania State University, had published an article on the marginalia written in the Philadelphia Free Library copy. One of the readers of her article was Jason Scott-Warren, a fellow and lecturer at Cambridge University. Ms. Bourne's article included numerous images from the First Folio displaying the annotations. Scott-Warren looked at the writing and thought it looked familiar. He did some research and his suspicions quickly began to fall in place. The handwriting had a strong, perhaps even compelling, similarity to that of John Milton. I might say that Scott-Warren had found paradise, except that's too obvious a joke to make, so I will refrain. However, it would be fair to describe it as "Milton Found."

It is not surprising that Milton's annotations would be found in a copy of the First Folio. He was born eight years before Shakespeare died and clearly was a great admirer of his work. His first published poem was On Shakespear. It appeared anonymously in none other than the Second Folio in 1632. Obviously, Milton must have had a copy of Shakespeare's works, and for his poem to appear in the Second Folio means his only possible source was the First Folio. Considering there weren't all that many copies of it printed, the odds that someone else made notations in a handwriting indistinguishable from Milton's seems very unlikely indeed. The identification is not yet 100%, and some may still demand further proof, but there is sufficient agreement at this point to say the evidence is getting close to overwhelming. As Shakespeare might say, "all's well that ends well."