What Type of Books Does Gwyneth Paltrow collect? 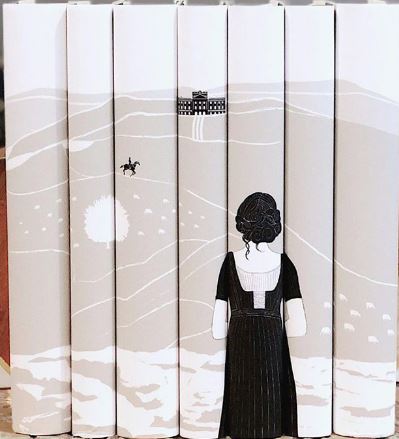 An example of what can be done with book jackets (from Juniper Books' Facebook page).

In a time when the role of books in society is in a state of flux, it is always reassuring to learn that a celebrated, well-known person is a book collector. What could be better than a famous actress, superbly talented, beautiful, and a household name, a star many times over? Such describes Gwyneth Paltrow, extraordinary actress, book collector. However, she is not your traditional book collector and this may make some uncomfortable. She is more of a sort of collector we have seen develop in this century, focused on aspects of books other than edition, age, rarity, or any of those factors that usually lead book collectors to pay crazy amounts of money for a particular copy.

We learned about Ms. Paltrow's collecting courtesy of Town & Country magazine. They did not interview the collector herself, but rather, her curator, Thatcher Wine. Mr. Wine founded Juniper Books in 2001. It's not a typical book store. Instead, it offers all sorts of services to collectors beyond simply selling books. They will provide specialty covers or jackets to suit your taste, perhaps following a color or fabric scheme. They specialize in helping form collections, but not so much finding first editions as in finding books that fit a collector's personality. For example, rather than building a collection around a specific author or subject, they build one that describes who the collector is. There is no expectation that the owner will ever actually read the books, but perhaps one could say if they did decide to read some books, these would be ones they would likely select. As Wine told Town & Country, "they are a reflection of where you’ve been and where you want to go."

While choosing books by color or for specialty dust jackets may seem odd, people choose other features of their homes based on look, such as paint, cabinets, rugs. Why not their books? As Thatcher Wine explains, "someone can have the complete works of Jane Austen, but in a certain Pantone chip color that matches the rest of the room or with a custom image...Why settle for books that a publisher designed?"

So, what sort of a collection did Wine develop for Gwyneth Paltrow? He explains that when she moved into her home a few years ago, she discovered she needed another 500 or 600 books to fill her shelves. Wine looked at her existing collection and determined her interests were focused on art, fashion, culture, photography and architecture. She also wanted books her children would like, so some children's classics they might want to read as they grow older were included. For the family room, he integrated books into her collection that "felt very light, inviting, and easy to grab off the shelves." For the dining room, he selected "a more rigid color palette of black, white and gray," since that is a room in which they are less likely to be pulling books off the shelves to read.

Looking at books this way is not without controversy, even derision. It can be seen as an offshoot of "books by the foot," something which Juniper also offers. That is where someone orders ten feet of red books and five feet of blue books to fill their shelves. They have no idea what books they are getting nor do they care. They will never be read or even opened. The owner simply wants to see red and blue on the shelves. It can make people who see books as fountains of knowledge and wisdom cringe. Similarly, there is the current fashionable style of putting books on the shelves backwards, that is, with their fore-edges exposed rather than their spines. Obviously, these won't be read since you can't even tell what is the title of any book.

But, is it really fair to criticize the use of books this way because it ignores what many of us think is the purpose of books? Is this really a new phenomenon, or a new iteration of something that goes back almost as far as books themselves? Some early collectors commissioned magnificent bindings for their books. Jean Grolier, the 16th century collector for whom America's oldest and largest bibliophile society is named, is not renowned for his selection of the texts he collected. It's for his beautiful bindings. The fine press movement is not noted for its extraordinary texts either, but for beautiful books. Collectors are not paying $50,000 or more for a Kelmscott Chaucer because William Morris' edition of Canterbury Tales is easier to understand than other editions. It is just as incomprehensible to English-speaking readers as a $10 used copy. What, exactly, is the difference? While Gwyneth Paltrow may make her selections for different reasons than I would, she is still a book collector, and I'll bet her shelves look nicer than mine, and nicer than they would if lined with electronic readers and tablet computers. And, what's more, she just may turn her children into book readers along the way.