Simon Beattie - “The books you never knew you wanted………..” 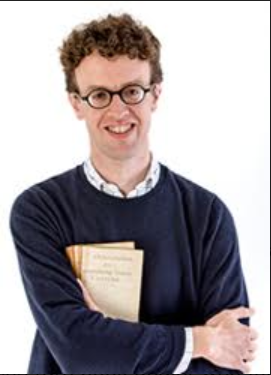 “If there is a trend in collecting nowadays, it is that collectors, more and more, are seeking increasingly obscure material, unique items that no one else has.”

This month Rare Book Hub corresponded with Simon Beattie, 44, an antiquarian specialist based in Chesham, Buckinghamshire in South East England which borders Greater London. Beattie bills himself as a specialist in “the books you never knew you wanted.”

His website displays his talents as a bookseller, translator and composer. It states that after almost a dozen years in the London book trade, he set up on his own in 2010, and two years later was included among the winners of the Smarta 100 Awards for ‘the most resourceful, original, exciting small businesses in the UK’. He is the founder of the popular Facebook public group “We Love Endpapers,” which now has over 4,000 members.

Because of the time difference between Hawaii and England RBH conducted this interview via email:

RBH: Can you tell us a little about your career in bookselling?

SB: I began my career as a bookseller straight out of university, in 1998, when I got a job working for Bernard Quaritch Ltd. in London. I set up as an independent bookseller in 2010, so next year will be my 10th anniversary. Having studied modern languages at university, my main interest is European (cross-)cultural material. Another interest is music, as I have sung in choirs since I was eight years old; I now also write choral music. I think the only hobby I have been doing for longer than singing is reading.

I became involved with the world of rare books just as the Internet was starting to have an effect. It’s a wonderful tool, and a rich source of information when doing research. Though I tend to agree with the late Bill Reese’s remark, made in 2009, that ‘in the age of the Internet one has to have the best, the cheapest, or the only copy.’

Although I enjoy the benefits the Internet has brought, I sell almost nothing online. Most of our sales are to people on our mailing list, either by catalogue, or at book fairs. I have no interest in having thousands of books in stock and engaging in faceless, impersonal transactions with people I don’t know. I’m a bespoke bookseller. I enjoy getting to know people, understanding their interests, and then finding books for them.

Although we list our books on third-party websites (such as ABE), I don’t like the lack of control you have over how the books are presented. While social media can be a great tool in developing relationships with customers and colleagues, in a friendly, visual way, right across the globe, I still come back to the traditional catalogue, whether printed or electronic for selling.

We’ve just had a new website built (www.simonbeattie.co.uk); there are no books to browse, and no search facility. What you can do, however, is sign up for our e-lists. That way, you get first notice of new stock, and we have control how the books are presented, in catalogue format.

SB: We have a word, of course, for these chance encounters when looking for books: serendipity. A word which was, incidentally, coined by a collector (Horace Walpole, in 1754). It’s something that humans, by their nature, enjoy; serendipity was voted the UK’s favourite word in the year 2000, and Peter Howard gave his legendary Berkeley bookstore the very same name.

People like browsing. So it’s an irony that we use the word ‘browse’ when looking online. For if you’re searching for books to buy, that is exactly what you cannot do. Book-buying on the Internet requires the buyer to know what it is she is looking for; databases are weak at allowing discovery.

Beattie quoted Mark Forsyth in “The Unknown Unknown: Bookshops and the Delight of not getting what you wanted:”

‘The Internet is a splendid invention, and it won’t go away. If you know you want something, the Internet can get it for you. My point … is that it’s not enough to get what you already know you wanted. The best things are the things you never knew you wanted until you got them. The Internet takes your desires and spits them back out at you, consummated. You search, you put in the words you know, the things that were already on your mind, and it gives you back a book or a picture or a Wikipedia article. But that is all. The unknown unknown must be found otherwhere.’

When I set up my business ten years ago this was certainly what I had in view. I’ve always enjoyed what you might call footnotes to history. I wanted to offer people things they’d never seen before, quirky stuff, ‘the books you never knew you wanted’.

If there is a trend in collecting nowadays, it is that collectors, more and more, are seeking increasingly obscure material, unique items that no one else has.

RBH: Beattie is well known in the trade as the founder of a popular Facebook public group “We love Endpapers.” (www.facebook.com/groups/WeLoveEndpapers/) RBH sees something interesting on that page almost every day. What gave you the idea? and does it surprise you how rapidly it's grown and the amount of interesting art that it generated?

SB: My only motive, if it was a motive, for starting the group was that I know various people in the rare book world who say ‘those are nice endpapers’, or ‘look at these’ at a book fair or when visiting a bookshop. I thought a Facebook group would be a good forum for people to share pictures of attractive endpapers as and when they come across them. Initially, I intended it to be just for bookseller and librarian friends of mine, but soon opened it up to anyone who may be interested. It’s been fascinating, and was even featured on The Guardian website earlier this year.

Yes, I have been amazed at the response. The group’s just over three years old and we have well over 4,000 members. It may just be eye-candy to some, but it can be educational, too. You can learn about marbling techniques, or how particular kinds of paper were made. Whatever the reason people join, I’m glad they enjoy it. Any book can be posted, regardless of date, and it’s been interesting to see the number of new books featured. Modern publishers have really upped their game when it comes to book design.

RBH: Do you have any thoughts about the UK vs the US book scene? Are there any fairs or annual events you like?

SB: I enjoy coming to the US, and seeing friends, customers, and colleagues there. I don’t have an open shop and exhibiting at a book fair gives me an opportunity to showcase what I have.

‘Pop-up shops’ are sometimes heralded as the new thing; book fairs have been doing it for centuries. There used to be a rhythm in the international fair calendar, with roughly one a month: Stuttgart, California, Milan, New York, Paris, London. More recently, the fairs have all begun to edge earlier and earlier, so that the year is now somewhat top-heavy.

The proximity of the California and New York fairs, now only a month apart, in the past few years has proved particularly challenging in terms of finding new stock, overall logistics and, put bluntly, cashflow.

For 2020, I have decided, sadly, to give Pasadena a miss so that we can focus on New York, which has always been a highlight. Another difficulty in recent years has been exchange rates, at least for buying. I suppose I’m fairly sanguine about it. Perhaps my margins can’t be what they were a few years ago, but it offers US customers a good deal. Now more than ever is the time to buy British!

RBH: Do you have any current enthusiasms to share?

SB:I follow the various British Library blogs; Medieval Manuscripts, European Studies, and Untold Lives are particularly good. (www.bl.uk/blogs/) In print, I still look forward to The Book Collector (www.thebookcollector.co.uk/) and the Deutsches Literaturarchiv’s Marbacher Magazine, (in German) and have been enjoying the recent series on independent historic libraries in The London Library Magazine. (www.londonlibrary.co.uk/about-us/magazine)

The Women in the Book Trade initiatives, on both sides of the Atlantic, go from strength to strength, and the series of interviews on the Fine Books & Collections website, with young librarians and booksellers, help highlight ongoing vitality in the rare book world. (www.finebooksmagazine.com)

SB: Going back to what I said earlier, looking for books online can be hard work. You can sift through a lot of dross to find a nugget worth having. I find I return again and again to booksellers I like, people with a good eye for books, and whom I trust. I appreciate things that are well described, with no nasty surprises when they arrive. Sometimes one has to pay a little more, for better material, but I’m happy with that.

Office and hours: Beattie has an office in Chesham, and it is generally staffed Monday to Friday 9am to 5pm, though it’s probably best to make an appointment.