Theophilus Barrois: The First of the Monks 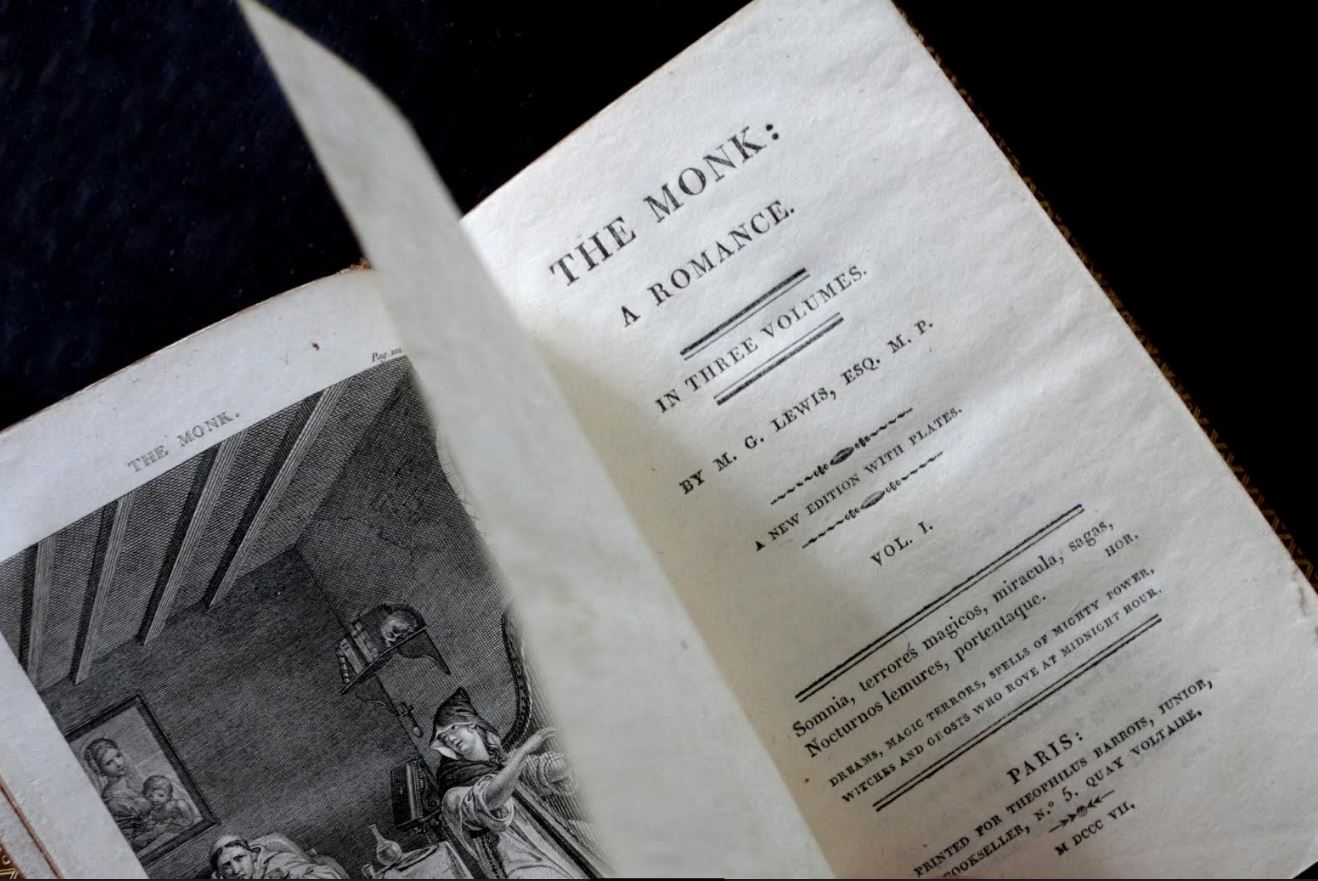 Matthew G. Lewis’ Ambrosio, or the Monk became an instant classic when it came out in England in 1796. Less than a year later, Year V—or 1797, old style, it was translated into French. Claude-François Maradan (1762-1823) printed a first in-12° edition without engravings, and then an illustrated in-16° one, which was, until the Gérard Oberlé catalogue (De Horace Walpole… à Jean Ray, 1972), wrongfully considered as the first French edition. The Monk created a scandal in England (Coleridge stated “if a parent saw (this book) in the hands of a son or daughter he might reasonably turn pale”), and underwent various changes in its French versions. One of them, entitled Le Jacobin espagnol, ou Histoire du Moine Ambrosio... (Paris, chez Favre—1797) was totally expunged of all supernatural scenes—and guess what? It became a happy-ending story. Needless to say that the readers who bought this copy never actually read The Monk. Those who bought the Maradan’s edition almost did—although they followed the tribulations of a Dominican priest rather than of a Capuchin one. In fact, it is believed that The Monk was never fully available in French until Léon de Wailly’s translation (Paris, 1840). In French, maybe—but it was available in France as soon as 1807, on the Quay Voltaire, in Paris.

This is a 3 volume-set bound in marbled calf with golden edges. The printer Theophilus Barrois—his first name is a Latin coquetry for Théophile—did all he could to make it look great. In fact, he offered various prices for various bindings—you could buy each volume separately: 3 Francs in wrappers; 4 if bound in a low-quality leather with golden bands on the covers; and 5 if bound in marbled calf with golden edges. Barrois was based in Paris but you could receive his books by mail providing you would pay “4 francs per unbound volume.”

The copy we’re talking about is bound in marbled calf—it features beautiful marbled endpapers as well. It is presented on the title page as “a new edition with plates”, but it is considered as the true first edition. There are even more classy editions: “To satisfy several book lovers, we had 100 copies printed on satin vellum paper; they come with illustrations before the letter. Each volume of those comes elegantly enclosed in boards imitating morocco for 6 Francs per volume. For those only the buyers are required to pay in advance when getting their first volume.”

The Monk was part of this Collection des meilleurs romans anglais (collection of the best English novels), alongside The Vicar of Wakefield (Goldsmith), Louisa (Helme), The Man Of Feeling (Mackenzie), The Children of the Abbey (Roche), A Simple Story (Inchbald) or The Mysteries of Udolpho (Radcliff). Nonetheless, each title came independently, being complete as such. In fact, Theophilus Barrois specialized in books in foreign languages, including English or Spanish. “The name of Barrois has always been associated with the Parisian trade in foreign literature,” Nicolas Bas Martin writes in A View From Abroad: Spanish Books in the Europe of the Enlightment. “His bookshop’s fame increased over the years and it was, by the turn of the nineteenth century, one of the best-stocked outlets of foreign literature, particularly English, German, and Spanish.” Barrois was no newcomer to the book business.

Théophile Barrois le jeune—our book reads Junior—, librarian of the Society of Medicine was, according to the Bibliothèque Nationale de France (BNF), the second son of the Parisian bookseller Marie-Jacques Barrois. He was also the son-in-law of the bookseller Claude-Jean-Baptiste II Hérissant—other sources claim he married Marie Marguerite, the daughter of the famous bookseller François Didot. Exempted of apprenticeship for being the son of a “master”, he was made “master” himself on December 22, 1773 and obtained his licence as a librarian on October 1st, 1812. He died in Paris on December 15, 1836, aged 84. He had several bookshops in his life, the last one was located 5 Quay Voltaire, in Paris. As written at the bottom of his catalogues, You will find at the same bookshop, a considerable assortment of books about Natural History, Medicine, Anatomy, Surgery, Pharmacy, Chemistry, etc, Latin, French and English.

His edition of The Monk is hard to find nowadays, and it is made even more valuable by the fact that it perfectly respects the original text. In 1840, Léon de Wailly endeavoured to restore Lewis’ work by giving the first “entirely faithful” translation of it. About the Maradan’s translation, he states: “It is credited by Quérand in La France Littéraire to MM. Deschamps, Desprès, Benoit and Lamare—it is said to be the best, and it was reprinted several times. It follows the despicable system of inaccuracy and fake dignity that then prevailed: the Capuchins become Dominicans; the night-lights turn antique lamps, etc. The period is to blame rather than the translators. But today, as peace has emancipated the translators and enlightened the readers, inaccuracy would be unforgivable. A translator is an interpreter, not a critic—and he shall bear it in mind continually.”

This statement tends to indicate that there was a political motive in the shift of the religious congregation—1797 was still a troubled period in France, following the Révolution of 1789. Anyway, despite the few aforementioned changes, the Maradan’s translation is very good. Nonetheless, it lacks a very important part, as shown by the Barrois’. The previous one ends with the dreadful words: “(The waves) reached the spot where Ambrosio lay, and, when they abated, carried with them into the river the corpse of the despairing monk”—which is a truly Gothic way to end up a story, indeed. Yet, the original novel features a last paragraph that was left aside by Maradan. Matthew G. Lewis confessed at the time that he had written this book to entertain his mother—he may have had an ulterior motive, if we are to believe this last paragraph. Lewis shouts at an unknown and haughty woman: “Lady, to look with mercy on the conduct of others, is a virtue no less than to look with severity on your own.” Could this be the true moral of The Monk? Thus, caring not about the straw stuck in the first translators’ eyes, let us enjoy the edition of Barrois that restores truth in a world of lies. Lewis’ detractors were wrong, The Monk is a true Christian story.