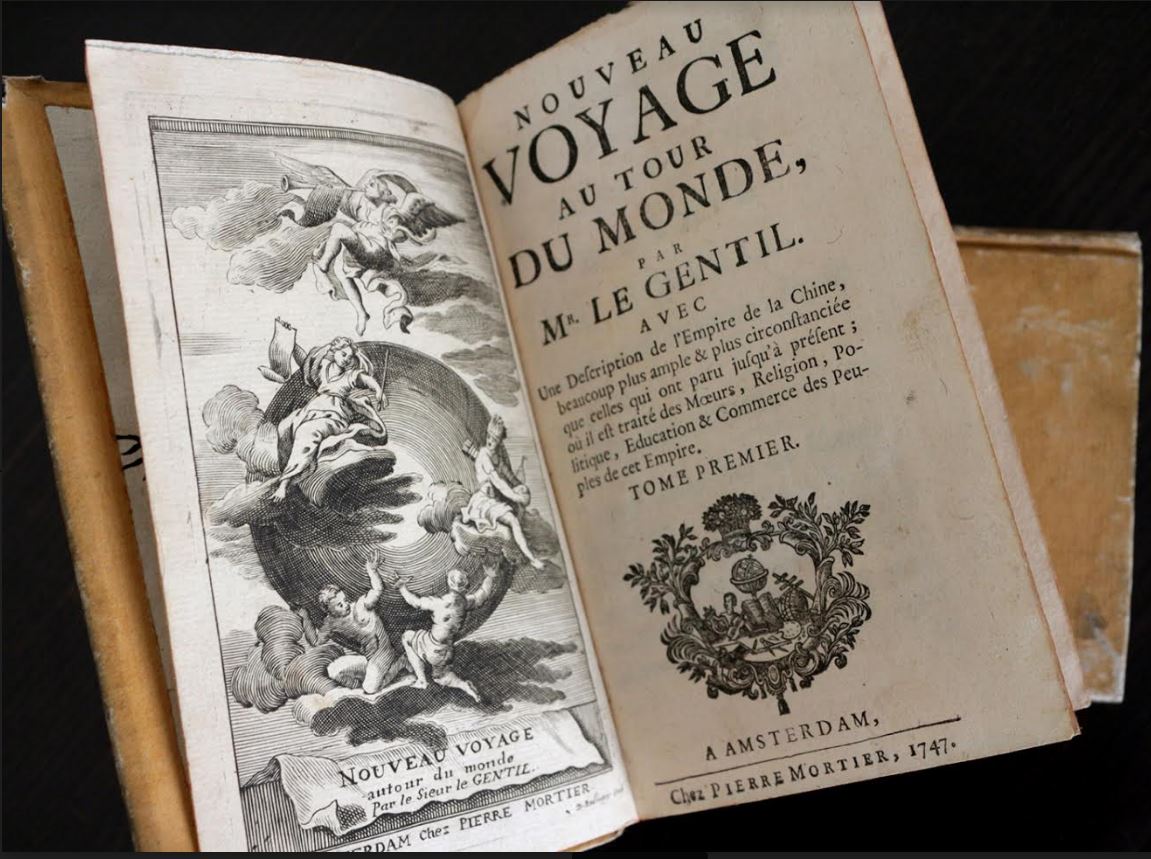 Le Gentil de la Barbinais is the alleged first French circumnavigator. He left Cherbourg, France, in 1714, and came back 4 years later with a detailed relation, Nouveau Voyage Autour du Monde (Paris, 1725). Mostly focusing on China, it is a lively and exciting reading, richly illustrated, and quite sought-after by travel books connoisseurs. Yet, French history doesn’t recount his name but Bougainville’s, a much more prestigious hero. Our author was probably too “gentle”...

Too Gentle For Your Own Good

“Had I accomplished this beautiful voyage sixty years earlier,” Le Gentil de la Barbinais (not to be mistaken with the physician Le Gentil de la Galaisière) wrote in his book, “the newspapers would have surely mentioned my name—I might even have ended up in LeMercure Galant*, who knows? Some people would have paid to see me at the fair of St-Germain, as a rare animal from faraway lands; unfortunately, everybody goes around the globe nowadays.” Actually, he was the first French to do so, 200 years after Magellan and 60 years before the renown Louis-Antoine de Bougainville! He published the relation of his travel in 1725, Nouveau Voyage Autour du Monde (Paris), with 18 engravings and maps. It was reprinted two years later (Chez Flahaut, 1727) and then one year later (Chez Briasson, 1728), and was then pirated by Dutch printers, including Pierre Mortier, in Amsterdam (1728, 1729, 1731, 1734, 1746, 1747). Yet, history doesn’t remember his name but the flamboyant Bougainville’s. A mere commercial trip, Le Gentil’s travel was probably not glorious enough, and his personality too common. Our “gentle” (Gentil means nice, in French) writer was “no stuff of which heroes are made”, Francis Bergerac writes in Escales Maritimes (2014): “When he came back to France, he found out that the investors had gone bankrupt and all the merchandise was seized. He didn’t like quarrels, and he followed, as he says, the commandment of the Bible by giving away his coat. This is probably the reason why our proud nation forgot about him”—also because, giving few maritime details, he made his account suspicious to some, especially since many fake travel books—booksellers nowadays call them apocryphal—came out at the time.

Le Gentil’s book is expensive— the auction house Pierre Bergé sold a very nice copy of the 1738 edition for $1,400 in 2010—, so I was surprised to find a very affordable copy for sale the other day. In fact, this copy features the allegorical frontispiece by D. Redinger only—no other illustration. Furthermore, this is no first edition, but a 1747 one (Amsterdam, Pierre Mortier), and it comes in 3 in-12 volumes with bindings “à la Bradel”, meaning with contemporary—here, yellowish—boards instead of a more luxurious leather binding. These bindings were originally invented in Germany and imported to France by François-Paul Bradel in the 1770s, probably as a way to circumvent the privilege of binders; it means our copy was bound at least a few decades after it was published. In fact, maybe a little bit later. Indeed, the title tags on the back read “Voyage par Gentil”. The words are fully written, which almost never happens on the tags of the 18th century, and the preposition “par/by” is surprisingly unusual. Was this copy bound at the turn of the 19th century? First editions are usually more expensive than reprints (no copy of the first edition was for sale on the Internet at the time this article was written), especially Dutch reprints, usually of a lesser quality as far as engravings and typography are concerned —our copy is full of misprints like frayer instead of frayeur, page 44, ne pouvaient. Ils point, instead of ne pouvaient-ils point, page 45, etc. Yet, this 1747 edition appears to be scarcer than the first one, as I could not find any copy listed anywhere—idref.fr only lists the 1746 one (Amsterdam, P. Mortier). In fact, upon examining the latter on googlebooks.com, I realized that the two editions are identical, with the same missing spots in the “Y” of VOYAGE (title pages) and the same aforementioned misprints—the year alone was changed from title pages. The 1746 edition features no illustrations either—except for the same frontispiece. The commercial mention “Adorned with several plans, views and perspectives from the principal cities and ports of Peru, Chili, Brazil and China” that appears on the title pages of all editions being absent from both the 1746 and 1747 ones, they seem to be complete as such—apparently, the 1731 edition (Mortier) also came without engravings. Pierre Mortier was known for his cheaper pirate books. C. A. Walckenaer writes (La Fontaine, Paris, 1827): “Some counterfeit editions of La Fontaine’s works were printed without illustrations, sold for a small price; such was the one given by Pierre Mortier, in Amsterdam in 1687.” Anyway, the original engravings—made from the author’s own drawings—are sadly missed since, according the French bookseller Edition-Original, “through the frontispiece (...) and the various maps and plans, the author develops a true visual rhetoric.” Fortunately, the text itself is quite fascinating.

Chinese Will Be Chinese

Le Gentil’s relation mainly concerns China, but he first goes to Arica, Chili, and Lima, Peru, “populated with traitors, thieves and murderers”, giving interesting details before eventually reaching China. Several years before the authoritative work of Du Halde (Description... de la Chine..., Paris, 1735), Le Gentil gives an intriguing description of a then ill-known country. He learnt a little bit of Chinese but was mainly informed by Father Lauréati, an Italian Jesuit, who had been living there for several years. Le Gentil appears like an ordinary man speaking genuinely his mind: “When you’ve never seen but the top of your little church,” he says, “everything appears wonderful to you!” He notices that the Chinese eat “even dogs”, that they cripple their daughter’s feet, who “can hardly walk”, that “they have no clear idea of a superior spirit, or any word to describe it.”

Not impressed at their philosophy, he nonetheless refuses to see them as barbarians: “There’s hardly one people with better laws or wiser precepts.” He adds: “Their ways are different from ours, but all usages were born out of man’s caprices. Raised in a certain environment, with certain values, we convince ourselves that our happiness and duty rely on them. We all reason from what we’ve learnt, and what we’ve always seen around us; everything that differs from our usages looks weird to us.” Le Gentil yet considers the Chinese as “definitely inferior to Europeans.” He also gives a precise description of their system, based on Mandarins—Chinese officials. Le Gentil and his associates are taken for a ride for months before being able to buy goods under very disadvantageous conditions. In 1717, they reach the Bourbon Island (La Réunion), passed the Cape of Good Hope, touched Brazil, and then arrived in France. Le Gentil’s circumnavigation took him several years, and at the end of the day, he was ripped off all his money. Despite tremendous cultural gaps and huge distances, the world this man toured in 1714 was quite the same as it is today. Men being treacherous, avaricious, surprising, fascinating, forcing social rules upon themselves, and then spending their lives trying to break them for the sake of personal interest. From 1714 to 2019, from China to France, whether sailing boats or riding planes, men will be men, for the best—and the worst.