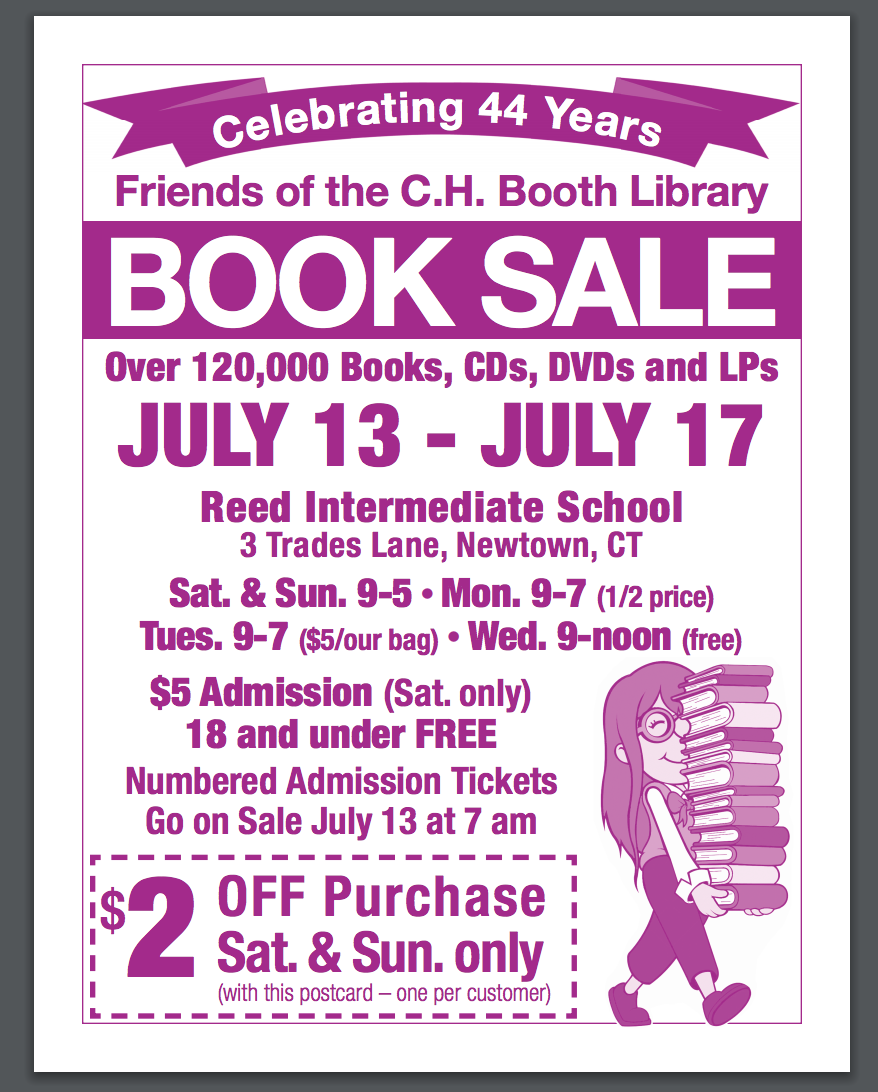 As certain as is summer, so too is the annual arrival of the Friends of C. H. Booth Book Fair, one of the most eagerly awaited book fairs in New England.  This year’s 5 day event follows the sequence of hours and offers now long established so the sale begins on Saturday July 13 and ends the following Wednesday.  Each day the terms of sale change ending on day 5 with all unsold material given to they with the fastest hands and enough cardboard boxes to stock a private library for free within an hour.

Here is the official announcement.

The Friends of C H Booth Library are pleased to announce the 2019 edition of our book sale, at the Reed Intermediate School, 3 Trades Lane, Newtown, CT. The sale will open Saturday, July 13 and continue through Wednesday July 17. Admission of $5.00 is charged on Saturday only, hours are 9.00-5.00 Saturday and Sunday.  Monday is half price day, 9.00-7.00, Tuesday is $5.00 per bag day, 9.00-7.00, Wednesday all remaining books are free from 9.00-12.00. All days are free admission except Saturday, when tickets will go on sale at 7.00 AM. There will be approximately 120,000 items offered, books, DVDs, puzzles and other media, sorted into over 90 categories, with fiction arranged alphabetically. A separate room will hold Specials and Collectibles; a partial list of each category is available at www.boothbooksale.org. Further information is available at the website, from boothbooksale@yahoo.com, or by calling 203-426-0864 or 203-426-4533.

This is the Newtown that suffered incalculable loss in December, 2012 when a deranged shooter killed 26 including 20 six and seven year olds at nearby Sandy Hook Elementary School.  In the aftermath the community united in its efforts to limit gun access and has since become a symbol of recovery.

Because of the charitable nature of the Book Fair it is also possible to simply give something to the event to increase the overall total.  Most years the Friends earn roughly $100,000 which is used to foster literacy and underwrite local programs.  The contact for such gifts is Mr. Renjilian and you can reach him via boothbooksale@yahoo.com, or by phone 203.426.4533.

As in past years the C. H. Booth has the volunteer services of John Renjilian, long time professional bookseller, who selects and prices unusual and valuable material that will be laid out in the show’s Rare Book Room.  Often, the gems disappear quickly so coming early on Saturday the 13th is recommended.

Here is a partial list of what will be on the shelves of the Rare Book Room No. 201.

Andersen, Hans Christian. Fairy Tales. Chicago: Belford Clarke, 1888. “A New Translation by Mrs. H. B. Paull.” An early American edition, with 12 chromolithograph plates. There is a hand-written index to the plates, giving the facing page number and (in most cases) the pages of the referent story. Rebound, probably in 1933, but the spine label which may have offered details of the collection/circumstances has been worn to illegibility except for the number 1933. Oth-erwise very good. $75.00

government posts; he was the father of Winston Churchill. Victor Bruce (1849-1917) was at Eton the same dates. He also had a distinguished political career, and was the grandson of the 7th Earl, responsible for bringing the Elgin Marbles to Britain. The binding is not fancy, but may well be a bespoke presentation binding, AEG, gilt dentelles; it was customary to offer such leaving gifts to friends. A monogram bookplate is present; while we can find a "C" we can not make an "RSC" and we suspect it may represent a later owner. Very good. $250.00

[Combe, William] The English Dance of Death. London: Methuen, 1903. Illustrations after Row-landson. Two volumes, together with, The English Dance of Life, same imprint. Bound in match-ing 3⁄4 red leather by John and Edward Bumpus, signed in each volume with last name only. Very good. $125.00

Conrad, Joseph. Two volumes, Typhoon and Lord Jim, both from the Doubleday Page edition of his works, 1922. Each volume is signed by Conrad on the flyleaf. Typhoon is the better (and has the better signature), with wear to the upper front hinge, with some separation; Lord Jim front cover nearly detached. The two volumes, signed, as is: $300.00

[Cookery] Two hand compiled recipe books. The first has a foundation as a friendship album, circa 1828, together with approximately 7 pp of manuscript recipes of about the same date. The unused pages of the album have been pasted over with newspaper clipped recipes, largely from a Manchester, NH, paper; we have found three internal dates in the clippings, two from 1866, one from 1862. One clipped recipe offers an unsweetened apple pie, “This makes a good Hard Times Pie.” Perhaps the most important clip is the back of one, advertising Mary Olive A Hunt, MD; “Miss Dr. Hunt attends to General Practice, but her specialties are OBSTETRICS and the DISEASES OF WOMEN”, notice of an early woman MD. The second volume is entirely handwrit-ten, probably last quarter of the 19th century. Occasional loosely inserted

clippings suggest the Boston Globe, from 1935. The covers are separated, some page loose. The two: $50.00

Dickens, Charles. A Christmas Carol. London: Chapman & Hall, 1843. First edition, probable 2nd issue. Title page in blue and red, half title in blue, Roman numerals with Staves in Table of Con-tents. Numbers spelled out in chapter headings. Rebound in full leather by Root & Son, with original cloth covers bound in rear: "D" in Dickens is unbroken, 14-15 mm between wreath and blind stamped border decoration, with blind stamping quite pressed. With the bookplate of Ganson Goodyear Depew, Trinity Pawling 1912, Yale 1919, Yale Law 1922. Depew helped organize a Yale unit during WWI, and served as a naval aviator. He was from a wealthy family and formed a notable book collection in his short life (1895-1924), leaving some books to the Eliza-bethan Club at Yale, and dispersing others to friends. There are memorial funds in his name at both Yale and Trinity Pawling. Gilt stamped holly leaves in four spine panels, red leather title and author labels. Very good. Together with The Cricket on the Hearth, L: Bradbury and Evans for the author, 1846, ad for a New Edition of Oliver Twist, to be published 1 January. Same binding, with original convers bound in rear, Depew's bookplate. Both covers separated. To-gether with a facsimile of A Christmas Carol, Boston: Atlantic Monthly, nd (c1920), intro by A Edward Newton, very good. Together: $3,200.00

[Edzard, Dietz] D Edzard. NY: Bittner, 1948. Intro by Gerd Muehsam. Owner’s inscription, Mi-chael Merryman. Sketch on fly signed D Edzard. There are a number of extras, a double sided sketch on white cardboard; a photograph of a seated woman beneath a painting, labeled on the back “Descendant of Olaf / Painting by Frances Merryman / [sketch] / Birth of Bruce’s Photo-graphic Career / taken by Bruce Begg 1974”; a double portrait sketch initialed F F M; portrait sketch on a MoMA October 1972 calendar signed Edna; portrait sketch on the caption page for the last illustration; drawing of a hand on the rear ep with several annotations, probably per-taining to newspaper clippings

Fletcher, Horace. [Collected works] Four volumes of this prolific author of nutrition and health books. All are published by Stokes, all are rebound in matching 3⁄4 leather, gilt spine decoration, the green dye faded to an even brown on the spines, all are inscribed warmly to Dr E[dward] S[anford] Gaylord, a prominent dentist in New Haven, and a former president of the National Dental Association. Fletcher devoted his life to promoting health through nutrition and proper eating habits, particularly thorough chewing, which earned him the sobriquet The Great Masti- cator. The books are: The New Glutton or Epicure (1906), The A.B-Z of Our Own Nutrition (1906) (inscribed “He taketh a film from the eyes by removing a film from the teeth and allows health to reign supreme July 1907”), The New Menticulture or the A-B-C of True Living (1906, and That Last Waif of Social Quarantine (1903); there are also two postcards from Fletcher to Gaylord, one describing a dental issue. A unique collection of a once important figure in Ameri-can popular medicine. All in very good condition. The lot: $150.00

Hochschild, Harold. Township 34. A History With Digressions of an Adirondack Township in Hamilton County in the State of New York. NY: the author, 1952. #448 of 600 copies. With the folding map inside rear cover, and the 24-page Addendum to Chapter 13 following page 170. Four-line inscription by the author, dated 9 January 1975. Fine, with little or no wear, corners and edges as new, unusual in oversize books. $600.00

Lavoisne, M. [A Complete Genealogical, Historical, Chronological, and Geographical Atlas; being a general guide to Ancient and Modern History. enlarged by the addition of several new maps of American History and Geography.] Philadelphia: Carey, 1821. Third edition. 23

double page, 10 single page, hand colored maps, plus a host of charts, tables, chronologies, etc., all hand col-ored. The highlight is the Melish map of the United States showing the American west. Lacking title page and end pages, covers worn, binding weak. Maps and other plates appear to be in good condition, with minor dings and tears, but certainly framable. $1000.00

My Country’s Flag of Stars Songster. NY: Harding, nd (1896). 8 leaves, plus two songs printed verso rear wrapper. A campaign piece, various copyright dates, the latest 1896; the booklet is as much an anti- Cleveland booklet as pro-McKinley, as far as we can tell there is no mention of the latter’s name, though Grover does appear. Cleveland eventually declined to run, there is no mention of the eventual Democratic nominee, William Jennings Bryan, and we suspect the booklet is early in the year when no candidates were definite. Paper wraps, pictorial front wrap, stapled binding, slight fraying to spine but very good. $200.00