The Voynich Manuscript Code Has Finally Been Cracked...Or Not 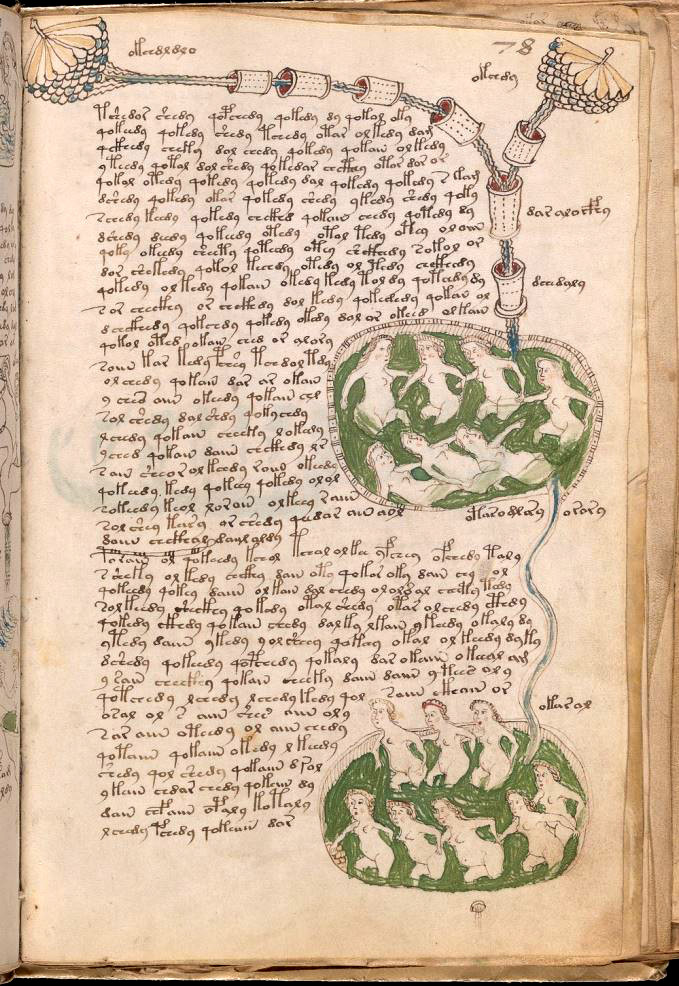 It was a stunning claim, at least for one coming from a respected university, the University of Bristol. The Voynich Manuscript, whose indecipherable code has eluded translation by the greatest scholars and code breakers for a century, had finally been cracked. What's more, it had only taken two weeks to do it. The mystery that eluded academics for so long has finally been solved. Or has it?

For those unfamiliar with the Voynich Manuscript, its name comes from Wilfrid Voynich, an early twentieth century Polish bookseller who purchased the document in 1912. It is filled with color illustrations of plants and scenes, notably lots of naked bathing women scenes, and astrological types of symbols. The illustrations are accompanied by writing, and the language of that writing is what has eluded researchers. No one has been able to decipher it. It clearly appears to be a real language, symbols and words repeated as would be expected of a language, but their meaning has been elusive. The language is unknown, and a translation has escaped scholars, code breakers, even computer programs.

The manuscript is now held by the Yale University Library to which it was given in 1969 by bookseller H.P. Kraus. Kraus had purchased it from Voynich's widow. Carbon dating was performed on the manuscript's vellum which dated it to the early fifteenth century, specifically, 1403-1438.

The news release from Bristol University was enthusiastic. "A University of Bristol academic has succeeded where countless cryptographers, linguistics scholars and computer programs have failed - by cracking the code of the 'world's most mysterious text', the Voynich manuscript," it read. "Although the purpose and meaning of the manuscript had eluded scholars for over a century, it took Research Associate Dr. Gerard Cheshire two weeks, using a combination of lateral thinking and ingenuity, to identify the language and writing system of the famously inscrutable document."

The statement further noted that Dr. Cheshire's findings had been peer reviewed and published in the journal Romance Studies. That put it several steps above most of the theories that have come out over the ages. There have been many. One baffling aspect to the manuscript is that most of the plants do not look like anything known to Europeans in the 15th century. That led to a couple of recent theories, including one that it really was produced in the 16th century, based on a sixth of the plants looking like American species, the unknown rest likely explained by the artist's limited skills. Another followed the carbon dating by theorizing it was created by a persecuted sect that fled Europe and traveled to South America before Columbus. There have been many others.

The problem with all of the theories is that while interpreters might translate a word or two, or use the illustrations and appearance of the letters to reach conclusions, no one could take their code and actually translate the document. If they had broken the code, they should have been able to translate it.

Dr. Cheshire's excitement could also be seen, as the release continued, quoting him, "I experienced a series of 'eureka' moments whilst deciphering the code, followed by a sense of disbelief and excitement when I realised the magnitude of the achievement, both in terms of its linguistic importance and the revelations about the origin and content of the manuscript.

"What it reveals is even more amazing than the myths and fantasies it has generated. For example, the manuscript was compiled by Dominican nuns as a source of reference for Maria of Castile, Queen of Aragon, who happens to have been great aunt to Catherine of Aragon.

"It is also no exaggeration to say this work represents one of the most important developments to date in Romance linguistics."

The language, he concluded, was not some secret code at all. Rather, it was an extinct language, a proto-Latin or "vulgar Latin." It was an earlier spoken Latin, but not the version used in writing. It faded away as Latin morphed into the various Romance Languages found in Europe today.

However, Dr. Cheshire also was not able to provide a translation of the manuscript. He noted only that it was now open to scholars to study, but would take time and money to translate.

The following day, after the report hit the news wires, the University of Bristol withdrew its news release. Dr. Cheshire's claims had met with resistance. Seeking shelter from the storm, the university said the "research was entirely the author's own work and is not affiliated with the University of Bristol," and that it had been in a peer-reviewed journal. The update from the university continued, "Following media coverage, concerns have been raised about the validity of this research from academics in the fields of linguistics and medieval studies. We take such concerns very seriously and have therefore removed the story regarding this research from our website to seek further validation and allow further discussions both internally and with the journal concerned."

Among the more devastating comments the claims elicited was a Twitter response from Lisa Fagin Davis, Executive Director of the Medieval Academy of America. She wrote in a series of tweets, "Sorry, folks, 'proto-Romance language' is not a thing. This is just more aspirational, circular, self-fulfilling nonsense."

"It is not enough to accept a Voynich 'solution' on the word of the author, even if published in a peer-reviewed outlet."

"I tried several years ago to reproduce Cheshire's Voynich results, because initially I was intrigued. But when you apply his Roman-letter substitutions and then try to translate the result, you have no choice but to be subjective. It's gibberish. The methodology falls apart."

"Once the foundations crumble, everything built on them - which includes the published paper - falls."

Other responses questioned Dr. Cheshire's interpretation of symbols in the manuscript as being consistent with Romance languages.

So here we are, yet again. The mystery lives on. Whether Dr. Cheshire is at least partly on to something or completely off track is not yet clear. What is clear is that nothing is yet clear. We still don't know and maybe never will. What we can be sure is that scholars and amateurs will continue to attempt to break the code, and we hope someone finally succeeds. The curiosity is killing us.