A BOOKSELLER’S LISTICLE: Six Vintage and Antique Books to help you make money 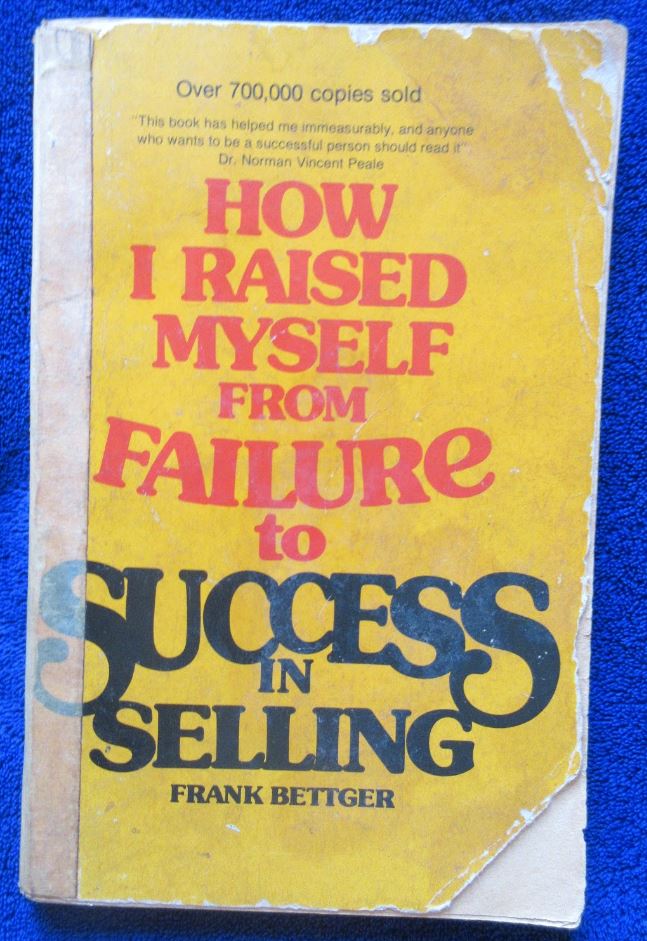 HOW I RAISED MYSELF FROM FAILURE TO SUCCESS IN SELLING by Frank Bettger is a timeless book of sales advice, as useful now as it was in the mid 20th century.

SELF HELP is one of the book trade’s most popular genres. Most of us have encountered Dale Carnegie’s How to Win Friends and Influence People, first published in 1936, or Napoleon Hill’s Think and Grow Rich, which came out the next year. Both books became pillars of the American quest for upward mobility, both went on to sell millions of copies and both are still in print today.

Though there is much to be learned from those two worthy titles, all of the books on this list contain advice or techniques that I have personally used and all of them have helped me to make money.

Here are six titles, all pre-internet, all available in paperback (some for as little as $1), which directly or indirectly helped my bottom line. Not a one of them specifically mentions book selling or related fields, but all of them are applicable to those occupations.

If you only read one book on this list, read this one. Frank Bettger was a semi-pro ball player in the 1920s who washed out as an athlete and later found fame and fortune selling life insurance. He writes with such enthusiasm and takes such a common sense approach to sales that each time I’ve read his book I’ve been convinced that life insurance sales must be an exciting field.

Bettger’s main insight is that the best way to get someone to do something is because they want to, and your role is not to “sell” them anything but to help them get what they already want. This was the book that first introduced me to the concept of selling by appointment, and whether it was selling books (or later in life real estate) I found his take on what makes people say “Yes,” was not only insightful, but timeless. Despite the “gee whiz” tone of voice, just about everything he said back in the 1940s works just as well now as it did then. This book is as much about psychology as sales. My paperback copy is dog eared, tattered and held together with tape. His advice is simple and solid. I re-read this book at least once a year.

Haven’t read Barnum’s autobiography? You are in for a treat. This is the man who invented American showmanship, put his brand on a famous circus, and even figured out a way to charge people to go out the door by hanging a sign: “This way to the egress.”

Barnum came back from every failure with something even more original and creative. Whether he was promoting Siamese Twins joined at the breast bone or the “little person” Charles Stratton, only 25 inches tall, whom he dubbed “General Tom Thumb,” Barnum found gold in hype. He sold 20 million tickets to his museum to see the General and made his name a household word.

It was Barnum who figured out there is no such thing as “bad publicity” and who is quoted as saying “I don't care what the newspapers say about me as long as they spell my name right.”

Are you stuck in a rut? Have your finances plateaued? Read Barnum as a refresher course on what imagination combined with audacity and persistence can accomplish.

If the 1870s was the era of ballyhoo, the 1970s brought us “New Age” thinking, aka “woo-woo,” and this is “woo-woo” at its best. Though I initially rolled my eyes, I was surprised to find that many of these exercises in visualization, guided imagery and relaxation actually work. Though I’ve got the little paperback on the shelf, the format that worked best for me was the old style cassette tape (remember those?) The audio version, with instructions on how to imagine things into reality probably was never taught at Wharton, but do them with any regularity and you’ll find your supply of money making ideas increases substantially. Creative Visualization is available in many formats including print, tape, and CD. I have no idea why these forays into guided imagery end up producing cash flow, but can only say don’t knock it if you haven’t tried it.

This little hardback from the late 19th century is both amusing and instructive. The internet has obliterated the need to write in a fine copperplate hand or leave a calling card, but the various explanations of interest, mortgages, deeds, liens, leases, plus a very informative chapter on swindlers, swindles and how to avoid them makes this a useful and interesting read.

I like the section on short rules of arithmetic. And though I may never need to know how to find the contents of a watering trough or measure hay in mow or stack, the visuals that go with the information are charming, as are the notes on rapid methods in business calculation. Not only is the advice plentiful, most of it is still useful including how to write a merchant code (a practice that almost every book dealer adopts at some point in their career), and a list of 30 business maxims - though quaintly worded still rings true including #15: “Never sign a paper for a stranger.”

The insight of Creating Money is often it is not money we actually need or want but the feelings, freedom or confidence that money brings with it. This is another “new age” entry into the world of offbeat financial advice. I can remember finding this title in an LA metaphysical book shop and standing by the shelf and reading whole sections before I left the store. Each chapter is followed by a series of suggested activities to help you focus not so much on how to make money, but discovering what you really want the money to do for you and how having money (prosperity, abundance) will help achieve it.

Again the methods are a bit unorthodox and the instructions are heavy on listening to the “inner voice” and locating the “higher self.” I don’t know why any of this stuff works, but it does work.

To my surprise I would do the recommended procedures and not too long after the phone would ring with a specially attractive opportunity or the mailman would show up with a large and unexpected order. Maybe these were just a series of fortunate coincidences and no cause and effect relationship existed. Nevertheless I’ve kept this book now for close to 30 years and for reasons I do not understand, it continues to deliver money as needed, even when more traditional or conventional methods fail.

#6 (1992) THE ARTIST’S WAY - A Spiritual Path to Higher Creativity, by Julia Cameron

The Artist’s Way first came out in 1992 and caused a stir among creative types, especially women, for what was then a novel way of breaking through writer’s block, imagining better outcomes, and finding creative fulfillment and awareness by keeping a journal. In the years that followed this title has gone through many editions and formats. There are Artist’s Way journals, workshops, retreats, videos and classes structured around it. It’s not so much a business or money making book as a series of creative and playful assignments that help to break old patterns and encourage new ideas. There’s nothing hard or complex about the Artist’s Way, and following the paths of action suggested often produce financial results more as a by-product of taking new risks than more traditional methods such as making and following a business plan.

1871 PT BARNUM: Struggles and Triumphs or Forty Years’ Recollection of PT Barnum written by Himself, New York, American News Co. 1871 available both in antique edition and contemporary paperbacks. Copies offered from about $2-$25

1893 THE BUSINESS GUIDE: Safe Methods of Business by JE Hansford revised and enlarged by Prof. James Nichols, Nichols and Co., Toronto 1893 both hard and paperback copies in $15 range. I prefer the actual antique hardback.

1949/1981 HOW I RAISED MYSELF FROM FAILURE TO SUCCESS IN SELLING by Frank Bettger, Cornerstone Library-Simon & Schuster, originally copyrighted 1949 Prentice Hall, many paperback copies available at $1, mid century editions from $20 up. Read this book.

1979 CREATIVE VISUALIZATION by Shakti Gawain Bantam New Age Paperback, 1979. Also comes as cassette tape, CD and other formats. Priced at $1 and up.

1988 CREATING MONEY by Sanaya Roman and Duane Packer, HJ Kramer, Tiburon Calif, paperback book, many copies available at $1 and up.

1992 THE ARTIST’S WAY - A spiritual Path to Higher Creativity, GP Putnam, many copies available in the $1-2 range.