The Amazing Discovery of the Bibliography of Christopher Columbus' Son 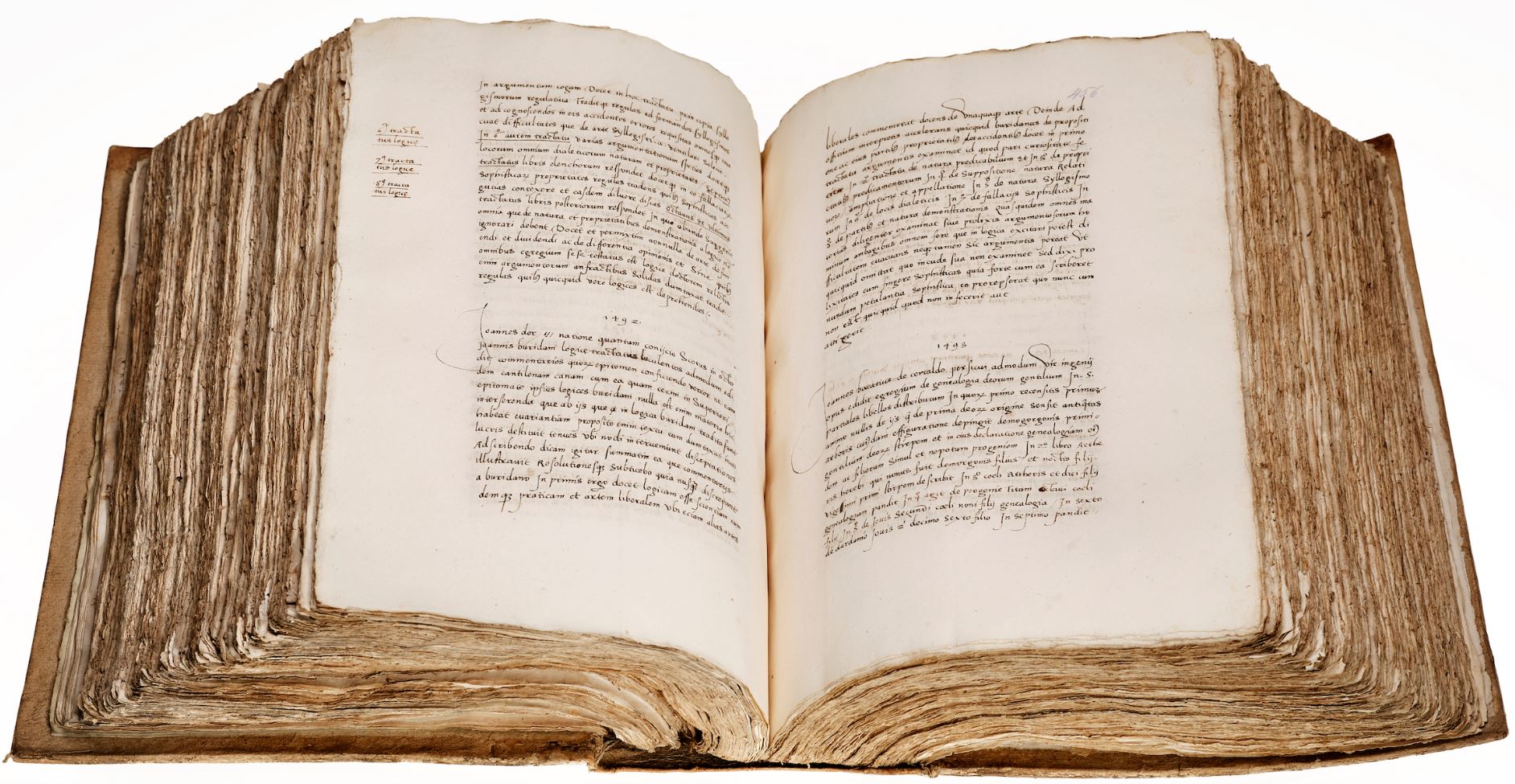 The discovery of a long lost, presumed destroyed, almost 2,000-page manuscript may well be the greatest bibliographic find of this century. Its finding is somewhat on a parallel with Columbus' discovery of America. Perhaps that is somewhat of an exaggeration, but there is good reason to make this connection.

The reason for comparing the discovery of this manuscript created by the greatest book collector of his time, Hernando Colon, to the discovery by Christopher Columbus is simple. Colon was Columbus' son. In English, he is often referred to as Ferdinand Columbus. Colon was a traveler himself, though not quite as far afield as his father. He traveled all over Europe. Colon was also a book and manuscript collector. He has been described as the first "bibliomaniac." Like Sir Thomas Phillipps three centuries later, he wanted to collect every book and manuscript in existence. Fortunately, that was much easier to do in the 16th century than in the 19th century. There were far fewer books yet to amass. Colon managed to accumulate a library of 15,000 items at a time when several hundred books was considered to be a large collection. He dubbed his collection the Biblioteca Hernandina.

Colon accompanied his father to the New World on the latter's fourth voyage. After his father's death, he also traveled with his half brother to the New World when his brother was appointed Governor of Hispaniola. However, colonizing new worlds what not his thing. Rather, Colon's calling was that of a scholar. His discoveries were books, manuscripts, and prints. It is known that he traveled all over Europe, collecting books to fill his library. His collecting continued until 1539 when he died. By then, he had amassed the greatest collection of books and paper ever assembled up to the time.

What is remarkable about Colon is that he did not stop with simply collecting books. He organized them, catalogued them, and described them. He was truly the first modern librarian. Having inherited a substantial amount of land and income from his father, he not only purchased books, he hired a staff to keep track of them.

Along with a listing of purchases, Colon had his staff catalogue his books in four different ways. They created a list of authors, subjects, keywords, and "epitomes." The epitomes are the most interesting part. He had his staff read each book and provide a summary. These range from half a page to many pages in length. What makes these so significant is that some of these books have been lost. The Colon epitomes are the only record of their existence.

Fourteen of the 16 volumes of cataloguing created by Colon are now housed in the Biblioteca Colombina in Seville. The other two were long presumed to have been lost.

Colon never finished his project. The catalogues were in various stages of completion when he died in 1539. The epitomes at that time covered about 10,000 of his 15,000 items. He wished the project to be continued, and the collection kept together and expanded. However, that did not happen. Disputes over the ownership of his collection prevented it. Eventually, around three-quarters of the collection was dispersed, with the one-quarter still remaining housed in Seville with the 14 volumes of cataloguing.

What happened to this set of epitomes after Colon's death was long unknown, although researchers now have been able to trace back much of its history. The reason it was unknown was that various references to it along the way were unclear as to what the book was, likely its significance unclear even to its owners. During the last few centuries it was particularly well-hidden. Why is obvious. It was housed among the books of an Icelandic collection at the University of Copenhagen. An Icelandic collection in Denmark is not a place you would think to look for a bibliography of books owned by the son of Christopher Columbus in Spain.

So, how did it get there? Here is what scholars associated with the Arnamagnæan Institute at the University of Copenhagen have concluded. Despite Colon's wish to keep the library together, ownership disputes led to its being torn apart. It was finally turned over to the Cathedral of Seville in 1552, 13 years after Colon's death. By then, half of the volumes had been separated from the collection (half again have since been removed). Either during this time, or somewhat later, this book was separated. It next shows up as being in the collection of Gaspar de Guzman, 1st Duke of Sanlucar (Spain), confirmed by markings in it. A 1627 inventory of that library describes it merely as a large book of 2,330 authors and the books they have written, suggesting the Columbus connection may have already been unknown to its owner. The mention 2,330 authors identifies it as being this book of epitomes.

De Guzman lived from 1587-1645. He served as Prime Minister from 1621-1643. The book is next found in the collection of Cornelius Pedersen Lerche. Lerche, who lived from 1615-1681, served two terms as Danish Ambassador to Spain between 1650-1662. He is known to have collected many books and manuscripts while in Spain. Where it was during the time between de Guzman's death and Lerche's ambassadorship is unknown. A portion of Lerche's collection was auctioned off after his death. This auction took place in 1682, and the epitomes show up in its catalogue, with a very brief description that leaves it unidentifiable as Colon's work.

It next appears in the Arnamagnæan Collection, prepared after the death of its owner, Árni Magnússon, in 1730. Nothing therein indicates how he obtained it. Magnússon is known to have purchased manuscripts from the Rozencrantz family, who collected Spanish manuscripts in the 17th century, so perhaps they purchased it from the Lerche auction.

Árni Magnússon was born in 1663 and raised in Iceland. Iceland was controlled by Denmark at the time. Twenty years later, he went to Denmark to study at the University of Copenhagen. He would eventually become the head librarian there, though he had intervening jobs, including a ten-year return to Iceland working for the government. Magnússon was a manuscript collector, and put together a major collection of primarily Icelandic documents. When he died, he left them to two institutions, one in Iceland, the other the University of Copenhagen. It came to form the Arnamagnæan Collection at the university which has remained there ever since.

It is the nature of this collection which helped hide the identity of the Colon epitomes all these years. It is overwhelmingly Icelandic material, with some other Scandinavian items. However, "hidden" within this collection are around twenty Spanish manuscripts Magnússon also collected. The Colon epitomes was particularly hard to identify as it contains no title or description. Indeed, the beginning pages are missing. The number of epitomes runs through number 2,330, but begins midway through item number 140. Earlier listings are missing, and apparently, those pages were separated many centuries ago. There are only around 2,000 of the epitomes present, not 2,190 as you might expect, as some internal pages are also missing. The cover is of no help in identifying it. The binding appears to be one that was used to bind some of the books in the collection around 1770.

Any hint of what the manuscript might be remained elusive until 2013. At that time, the library was visited by Guy Lazure, a history professor at the University of Windsor in Canada. He came across it while researching other matters. Professor Lazure suspected there was a Columbus connection, though he did not identify it as a missing volume of Colon's cataloguing. However, this led to further investigations this year by Professor Matthew Driscoll of the University of Copenhagen and Research Associate Kivilcim Yavuz. They contacted Professor Lazure, who thought it might be some sort of "bibliographic tool" from Colon's library. That led to follow-ups with other experts familiar with Colon's library who were able to positively identify it as one of the two missing cataloguing books. After almost 500 years in the dark, this collection of around 2,000 of Fernando Columbus' epitomes has finally been found. There will be much more research done in the years to come.