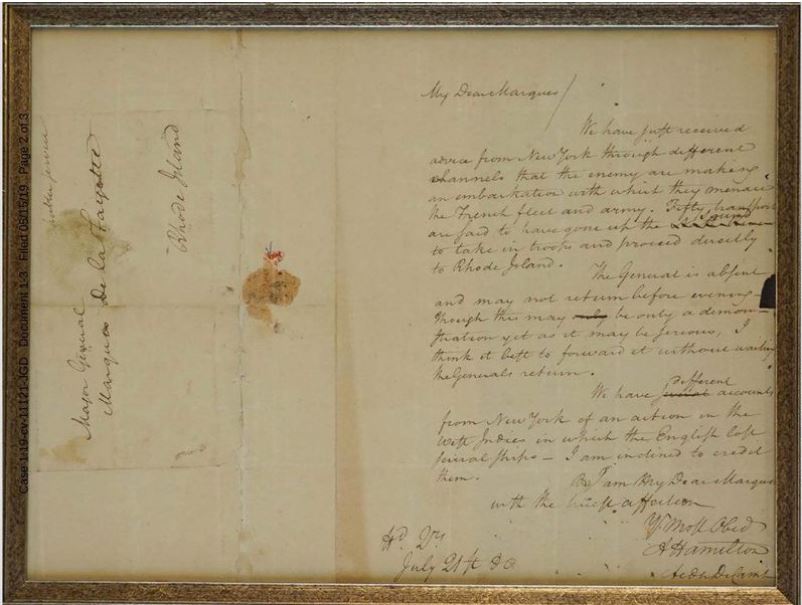 A letter written by Alexander Hamilton to the Marquis de Lafayette, stolen years ago from the Massachusetts Archives, has been found. An action has been taken by the U.S. Department of Justice in Massachusetts for forfeiture of the letter back to the Archives. It almost certainly will be making its way back. The letter was written by Hamilton to Lafayette on July 21, 1780 in the midst of the Revolutionary War. It is a warning to the leader of French naval forces aiding the Americans concerning the movement of British troops.

The letter was stolen from the Massachusetts Archives sometime between 1937-1945 by a former employee, according to the charges. The Hamilton letter was not alone, the employee also stealing papers from George Washington, Benjamin Franklin, Paul Revere and Benedict Arnold among others. The theft was not noticed for several years. In 1950, the employee was arrested and most of the documents were recovered, but not all.

The Hamilton letter made its way to a books and manuscripts dealer in Syracuse, New York, who sold it to an ancestor of the current holders. It devolved to that Buyer's son and eventually to his children in South Carolina. They recently decided it was time to sell the letter. They brought it to an auction house in Virginia, which estimated the value at $25,000.

As appropriate for an auction house with a valuable document such as this, they did some research and discovered it on a list of stolen material, this one taken years ago from the Massachusetts Archives. They called in the FBI, which took control of the letter and turned it over to the Justice Department. About two weeks ago, the Department of Justice began proceedings to have the letter returned to the Archives.

The South Carolina family which possessed the letter reportedly has not decided whether to contest the forfeiture action. They would like a bit more proof of ownership, but it seems hard to imagine they will fight this one for long. The title to an item does not change hands when it is stolen, so the thief had no title to sell to the dealer. Likewise, the dealer had no title to transfer to the collector, nor the collector to his descendants. The title and all rights to the property remains with the original owner, in this case evidently the Massachusetts Archives. Since the current possessors apparently have no title, they must return the document to the original owner and are not entitled to any compensation.

Since the Archives reported the theft when it was discovered years ago, also notified booksellers to be on the lookout for it, and had a photostatic copy, it is hard to imagine they will have much difficulty proving to a court they are legitimate owners. Added to this is that holding onto government documents is particularly difficult for private collectors, even in cases where the original transfer was legitimate. The burden of proof generally falls on the collector. If the archivist had honestly purchased the letter from the Archives but kept no receipt or other proof, the collector would most likely still be out of luck. If the Archives had tossed it away as part of a housecleaning years ago, and the dealer picked it out of a trashcan but there was no proof of this, the collector again would most likely have to forfeit it. The presumption is that government documents belong to the government and the burden is on the possessor to prove his possession is legitimate. This letter is almost assuredly going back to the Massachusetts Archives.

The letter from Hamilton was a warning to Lafayette that the British were sending forces to Rhode Island, where French naval vessels were waiting. Those forces would later make their way down to Virginia to participate in the final battle at Yorktown. It is a good thing for Americans that Hamilton warned his friend to be prepared for an attack on the French fleet. The letter reads:

We have just received advice from New York through different channels that the enemy are making an embarkation with which they menace the French fleet and army. Fifty transports are said to have gone up the Sound to take in troops and proceed directly to Rhode Island.

The General is absent and may not return before evening. Though this may be only a demonstration yet as it may be serious, I think it best to forward it without waiting the Generals return.

We have different accounts from New York of an action in the West Indies in which the English lost several ships. I am inclined to credit them.

I am My Dear Marquis   with the truest affection   Yr. Most Obedt