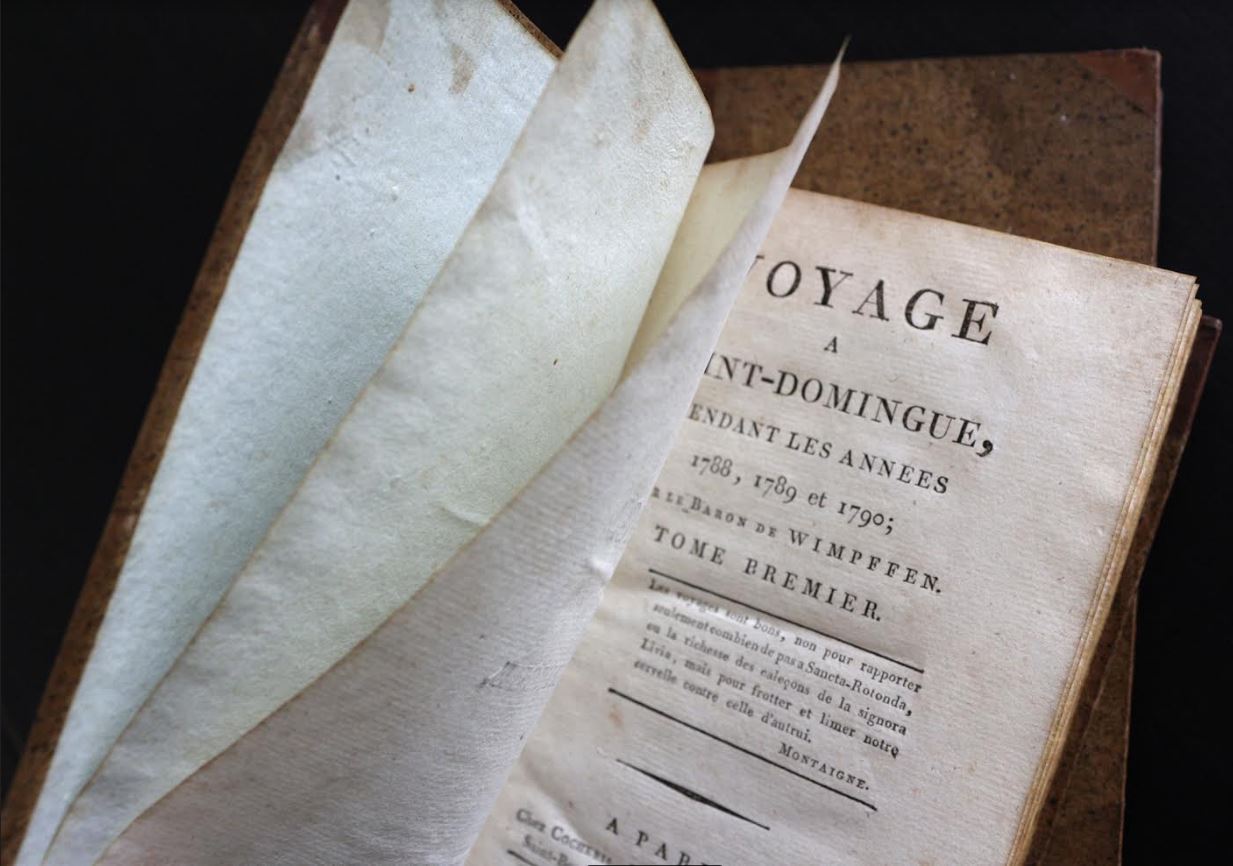 Between 1788 and 1790, Stanislas de Wimpffen resided in the French West-Indian colony of Saint-Domingue (Haiti). He failed to make a fortune, but he gave an intimate description of a corrupted society based on slavery, and about to sink in a pool of blood. Actually, the island caught fire a few months after his departure! Wimpffen’s narrative, Voyage à Saint-Domingue pendant les années 1788, 1789 et 1790 (Paris, 1797), first came out in England—and this is no accident.

This is a typical book from the post-French Révolution (1789) period, printed on cheap paper, and bound in half low-quality leather. The title and number plates, on the backs of the two in-8 volumes, are also very cheap, and the gilding is minimalist—there’s a folding chart at the end of volume 2, but no engraving or map. We know little about the printer, R.L. Cocheris, who was “active approximately 1796—approximately 1800” (archive.org). Based in Paris, he published a few books including Bayard’s Voyages dans l'intérieur des Etats-Unis (1797), and some posthumous editions of Diderot alongside François Buisson, another bookseller from Paris.

According to the title page, our book was printed “Year 5 of the Republic.” In September 1792, with the intention to erase all royal symbols from the public square, the Revolutionary government decided to shift from the “old” Gregorian calendar to a Republican one. Names of months were changed, and civilization was staring all over again, not from a Christian perspective—since the Church was the natural ally of royalty—but from a Republican one! 1792 then became “Year 1”. So, whenever you come across a book printed “Year ‘something’ of the Republic”, just add ‘something’ to 1792 in order to get the actual date of printing. Thus, our book was from “1797 old style”—as specified (in brackets) on the title page. These new years were from September to September so that a book published “Year 5” might actually be from 1798—this calendar remained effective until 1806. The Republic was a sort of a new religion, and everything was going through its filter. When talking about his author in the preface, the printer calls him a “man of Court”, adding at once: “if Republicans will forgive the expression”. Then, on the last page of the second volume, we find not the regular King’s Privilege (authorization of printing), of course—but a legal statement, placing “this edition under the protection of the law and the probity of the citizens.” The printer dated it as follows: “In Paris, on Vendémiaire the 10th, Year VI of the French Republic (October 1st, 1798), which is one and indivisible.”

Our book is also deeply rooted in its time because it regards the French colony of Saint-Domingue (Haiti), which the author left a few months before the general rebellion broke out, in August 1791! As a matter of fact, it first came out in England (A Voyage to Santo Domingo—London, 1797), with a very political preface, in which Wimpffen describes the best way to capture the colony of Saint-Domingue. At the time, resenting the abolitionist measures of the French revolutionary government, many planters turned to the English colonists of the nearby island of Jamaica, and offered to deliver them the colony, providing they would intervene against the rebellious Negroes—the English did try to capture Saint-Domingue, but were eventually repelled by the troops of the black hero Toussaint Louverture. This preface, wisely expunged from the French edition, which came out a few months later, clearly shows on which side Wimpffen’s bread was buttered. A slave owner, who desperately tried to “make it” in the plantation business, he portrayed a society that disappeared shortly afterwards; his testimony thus became a time capsule, and we’re about to open it—let’s go back to the West-Indian Apocalypse, “Year minus 1”.

Alexandre Stanislas de Wimpffen (17..- 18...), was a German Baron, who had received a French education. He enjoyed writing letters to his friends while travelling. In 1788, he published Lettres d’un Voyageur (Amstedram, 1788), relating a travel that took him from England to South Africa. The same year, he embarked at Le Havre, France, on the Venus—this time, he was going to Saint-Domingue after his dreams of riches, but the awakening was a rude one. “The cracking of whips, the smothered cries, and the indistinct groans of the Negroes, who never see the day break but to curse it; who are never recalled of a feeling of their existence, but by sufferings—this is what takes place of the crowing of the early cock.” Wimpffen introduces himself as deeply opposed to “the infamous traffic we maintain on the coasts of Africa”—he means slavery. Yet, as he intended to become a planter, he had to become a slave owner. His position towards slavery appears to be ambivalent—and quite significant of the mentalities of his time. An educated man, he often sounds like an educated fool. To him, the colony was a wild world with no refinement, where “the disgusting alliance of all the absurdities of ignorance and sottishness (sic) affecting talents, with all the vices of an immorality, which cannot even allege seduction as an excuse, (...) presents the humiliating picture of humanity in the last stage of degradation.” He had heard so much about the capital Port-au-Prince, while in Europe! People there described it as “the residence of the civil and military power, the capital of the richest country on the face of the globe! the throne of luxury ! the centre of voluptuousness!” It turned out to be but “two rows of huts” and “a chaotic mass of wooden barracks.” The white women he met were just “prostitute from the hospitals*, abandoned wretches** raked up from the mud of the capital.” The freed Mulattoes “remain in a state of abjectness (...). If I visit a rich Mulatto (...) he will ask me to dinner; but if he be correct, he will not presume to sit at table with me.” He felt sorry for the slaves, although they stink “like house-leeks”; of course, when he heard about that young lady, “one of the handsomest in the island”, who had thrown her Negro cook into the oven “yet glowing with heat” because he had ruined a dish, he was outraged.

There were 460,000 slaves in the colony at the time, and only 18,000 colonists. Wimpffen soon realized that “your colonies, such as they are, cannot exist without slavery. (...) You must then sanction slavery, or renounce the colonies.” The slaves were not all miserable, he states. There is peace of mind in slavery. What does a slave have to care about? To put it simply, “when the Negro has eaten his banana, he goes to sleep.” Obviously, this state of bliss didn’t concern bad cooks. In Saint-Domingue, Wimpffen realized that “the conquerors have assumed the manners of conquered.” The whole island resembled a giant brothel, where “the girls are a more valuable commodity than the boys, because (...) if they have the smallest pretentions to beauty, they have no great need of abilities to excite, among the unmarried whites, an emulation which assures them a price impossible to ascertain, since it is love, and what is more, self-love, which determines it.” When a female slave “wanted” to sleep with a White, she had to ask her master. She would receive money from her “lover”, so the master would collect his share, which made him—yes, a pimp. Slaves were not only sexually abused, but they were sexually exploited—a burning issue hardly discussed at the time, even by the abolitionists.

After three years’ time, Wimpffen’s efforts had not paid, and he grew disillusioned. “We must look forward to an epoch, which is not, perhaps, so distant as we may imagine;—that of a total cessation of the slave trade.” This world, he felt, was about to crumble. He left for the United States in 1790, regretting nothing—and no one. “The more I know the inhabitants, the more I felicitate myself on quitting it. I came hither with the noble ambition of occupying myself solely in acquiring a fortune; but destined to become a master, and consequently to possess slaves, I saw (the necessity) to know them—and I depart with much less esteem for the (Whites) than pity for the (Negroes). When a person is what the greater part of the planters are, he is made to have slaves; when he is what the greater part of slaves are, he is made to have a master: Tout le monde est ici à sa place/Everyone here is at their place.” As Voltaire’s Pangloss would say, all is well.

A few months later, Wimpffen left a colony that didn’t deserve him. Shortly afterwards, Saint-Domingue indeed sank in a bath of blood, only to resurface under the new name of freedom, Haiti—“Year 1 of the first black Republic ever.”

A Voyage to Santo Domingo,

(successors to Mrs Cadell) in the strand; and J. Wright,

With a folding map of Santo Domingo and a frontispiece (portrait of the author).