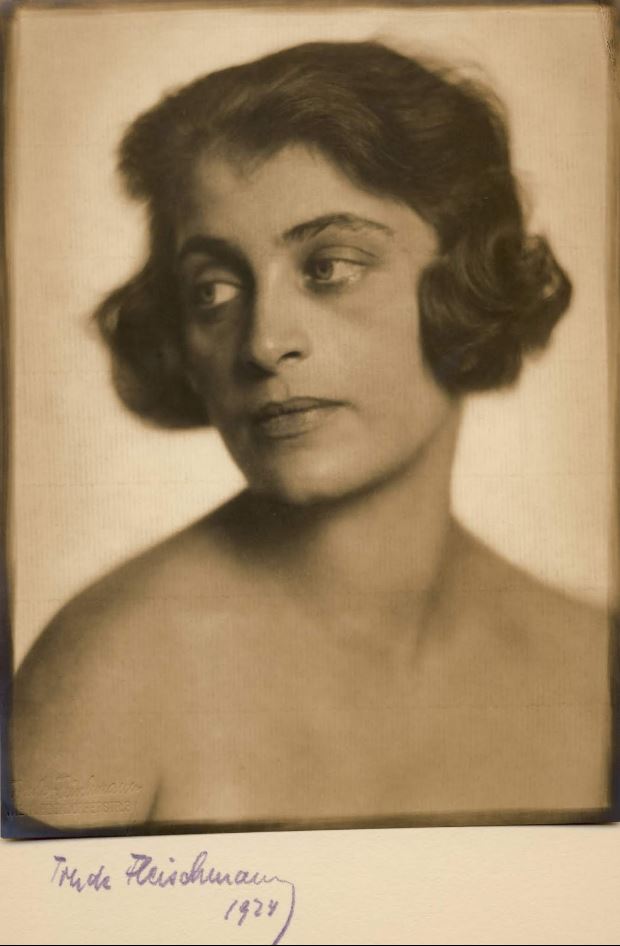 Hanne Wassermann Walker died in West Vancouver, British Columbia, in 1986. She also died in obscurity. She had lived there for over 40 years, all but the last five with her husband, George Walker. Few would have known that she once lived a charmed life in the European cultural center of Vienna, Austria. Nor would they have known of her friendship with, and model for, the well-known Austrian photographer, Trude Fleischmann. Most of this history would have died with her were it not for the curiosity of a person called in to clean out the leftovers of a lifetime when she died, heirless.

This story comes to us from Vancouver bookseller, Bjarne Tokerud. Tokerud was called in by the man who cleaned out Wasserman's home over 30 years ago when he, too, decided it was time for a house cleaning, his own. In 1986, Gerry Davie received a call from a man he did not know asking if he would clean some stuff out of a house being sold. Davie had a truck and did that sort of work at the time. On his second visit, he was handed several large green trash bags filled with documents and photographs and told he could keep them if he liked. They were filled with the memories of Hanne Wassermann Walker. Thankfully, he kept them.

Johanna Herrmann was born in 1893 in Vienna. At some point, she ditched the more formal "Johanna" and simply went by "Hanne" instead. In 1914, she dropped her last name, Herrmann, when she married Dr. Gustav Wassermann. The marriage did not last long, not because it was unsuccessful, but because Dr. Wassermann died the following year. Hanne would be left to develop a career on her own. Her specialty would be physical fitness and gymnastics. She wrote health manuals for women, becoming a highly respected expert in the 1920s. She corresponded with European royalty, film star Hedy Lamarr, and other notables such as Lady Mountbatten and the Rothschilds.

At some point, she met Trude Fleischmann. She was a photographer who opened a studio in Vienna in 1920. She took many photographs of Wassermann in various gymnastic poses. Some of these come up for sale in auctions or through art sellers today and they bring substantial prices. Fleischmann would go on to photograph many celebrities, perhaps her most notable photographs being those of Einstein, taken after both had moved to America.

As the 1920s turned to the 1930s, the good times faded away. The Depression was raging through the world, and even worse things were happening nearby in Germany. It was a particularly bad time for Wassermann and Fleischmann as they were Jewish. In early 1938, bad turned to lethal as the German Nazis invaded Austria, taking over the country. Attacks on Jews started almost immediately, property confiscated, people forced to perform demeaning labor in the streets, some shipped to concentration camps. At least it was still possible for some to get out. First Fleischmann, then Wassermann escaped through London. Wassermann was helped by wealthy socialite Marie Louise Wannamaker Munn, of the Philadelphia merchant Wannamaker family. Wannamaker Munn had connections in Italy that enabled Wassermann to emigrate to America. Also coming to America was Wassermann's romantic interest, Irishman George Walker.

Fleischmann would settle in New York where she became a famed photographer. Wassermann and Walker moved on to California.

In California, Wassermann designed slings for transporting the injured and taught rescue techniques at an Air Force base. In 1943, Wassermann and Walker were married and moved to Vancouver, British Columbia. For the next four decades she lived in obscurity as a certified exercise teacher and physiotherapist. It is unlikely much of anyone there knew of her exciting and successful prewar life in Vienna. Tokerud noted that when she visited the wealthy as a personal trainer, she came through the service entrances like other workers. No one knew her previous connections to European royalty. Tokerud surmises obscurity was her way of adjusting to her new situation, from beautiful young woman of Austrian society to middle-aged working woman. That's how she remained the rest of her life. George died in 1981, Hanne in 1986 at the age of 93. They had no children or heirs to claim her memories.

Returning to the green trash bags, Gerry Davie was fascinated by what he found inside. It was filled with beautiful photographs and all the other memorabilia of a lifetime. He could not part with it. Davie did some research and learned of Fleischmann's importance as a photographer. Tokerud also noted that Davie has a "good eye" for ephemera and often exhibits it at antique and collectible shows in Vancouver. At one of those shows, Tokerud asked if he could place posters for his own Treasures East and West Exhibition in April 2018 in his booth. Davie obliged. In return, Tokerud invited Davie to his exhibition. Shortly before leaving that exhibition, Davie turned to his wife and asked, "Perhaps I should let Bjarne know about the Hanne Wassermann archive?"

We'll let Bjarne Tokerud take the story from here. "At the show he handed to me a blue paper note with the names Trude Fleischmann and Hanne Wassermann written on it, while suggesting that there was no hurry, but that perhaps I might be interested….. I took out my wifi connected ipad and image googled the two names.

"I saw in a few of the photographs of Hanne Wassermann and other photos by Fleischman a pictorialist style to portraiture. Gerry then told me he had a whole archive, now filling several large bins, stored at home consisting of reams of correspondence, original documents, photographs of all kinds, albums, and more that documented not only the life of Hanne Wassermann but also her relationship with Fleischmann. I suggested that it would be hard to make an offer on an archive like this and that it would take some study. From his comments and narrations I could tell he had gone through the archive quite thoroughly and lovingly. He had developed a great fondness for Wassermann. I then proposed a consignment arrangement and suggested he show me the collection and we could take it from there. While he stated he was not in any hurry, I was quite excited by the opportunity and was not going to let it slip away. I packed up part of the trade show on Monday and returned to Victoria. The next day, on Tuesday, I returned to Vancouver as I now had an appointment with Gerry to view the collection.

"While I cannot speak or read German much at all, except for some cognates and bibliographic terminology, I could see in the German documents enough for me to sense there was a great story waiting to be discovered and described. I walked out of the house with the collection, with a signed agreement in my hands. That was only the beginning as I had to sort through a partially organized collection, and start making sense of it chronologically and content wise. Later on, we agreed on an asking price for the collection and I set to work with my assistant Charlene Wong assembling the collection in binders, and portfolios for the larger documents and the many large format mounted, embossed and signed photographs by Fleischmann."

There were hundreds of smaller Fleischmann images in the collection. There wasn't any correspondence between the two present. However, there are two long, typed letters from Hedy Lamarr. Fleischmann was instrumental in creating an image for the then unknown young Austrian woman, whose beauty and talent would lead to a spectacular career as a movie actress. There are also three letters from Wannamaker Munn relating to her help in enabling Wassermann to escape to the United States. One refers to Brioni (Trieste), an indication that may be where Munn and Wassermann first met. Other personal effects included the death certificate of Dr. Gustav Wassermann, her first husband, and a 1939 Austrian identity card for her mother. It is ominously stamped with a Nazi eagle. Later items concern efforts by Wassermann Walker and her attorney to obtain compensation for property seized from her family by the Nazis. There are also boxes of lectures she gave and booklets she produced, much in German and mostly while she was still in Austria.

Once a decision was made to offer the collection, Tokerud approached the University of British Columbia by phone with a brief description of the archive to see if there was any interest. They were intrigued. He sent some samples, and then at their request, set about the task of creating an inventory. It took six weeks to complete the inventory, place the photographs in protective sleeves, and put the correspondence and ephemera in protective sleeves and binders. Next, the archive was sent to the university on approval. The university approved, and in fact, very much wanted to keep the collection in British Columbia. Archivist Krisztina Laszlo described the archive as the best thing she had ever seen, while the faculty was similarly moved by it. Their next step was fundraising. They were able to secure grants from several foundations and others to obtain the collection. Tokerud said that he could not give the price, though he did say that the large format photographs by Fleishmann typically sell for $500-$3,000 each in the market, the postcards for $300.

This was not only a career highlight for the UBC Archivist. Bjarne Tokerud commented, "Having handled many archives and photograph collections over 38 years in business, this archive ranks as certainly the highlight of my career as this was not just a local history story but an international one of some importance. While handling the documents, letters and photographs, and as I became familiar with the many aspects of her life, I fell in love with Hanne Wassermann as has nearly everyone who has gotten close to the Trude Fleischmann photographs and the materials in the archive." Forgotten for the last half century of her life, Hanne Wassermann Walker is forgotten no more. She will long be remembered by her neighbors who barely knew her in life, but have come to love her now that she is gone.