Vic Zoschak and Tavistock Books: A 30th Anniversary for the President of the ABAA 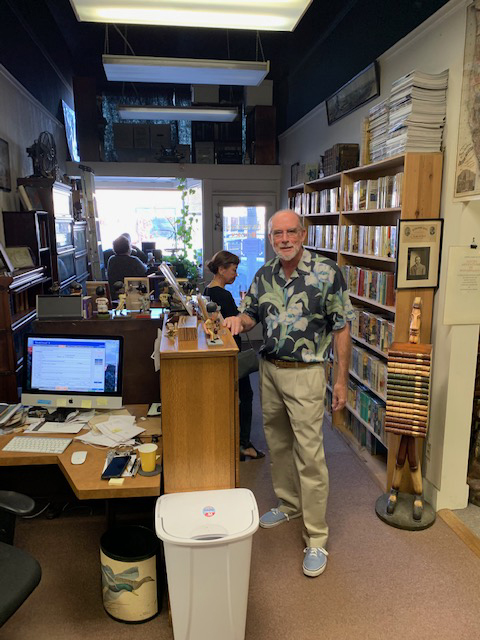 Vic Zoschak, 30 years in the trade and current President of the ABAA

For Vic Zoschak of Tavistock Books this April marked his 30th year in the rare book trade.  His experience as a rare book collector and dealer has spanned the most tumultuous years in modern times for what was once a rather sedentary, cerebral trade.  But, in considering this career that continues today, at the ripe age of 66, and which he hopes to continue on into his 80s, he expresses gratitude for the books, friends, travel and adventure the trade has brought him.  “I would absolutely do it again” and today he encourages, mentors and sponsors young [to the trade] booksellers as they find their footing in what continues to be the complex interaction of skills, experience, and material.  People who become bookdealers do not play checkers.  For them it’s chess.

Not surprisingly dealers often prefer the written word and so I sent a list of subjects and questions to which he replied.  We then talked the talk and I then prepared this piece which I asked him to edit and review for accuracy.

So here goes, the man behind the counter.

How I became a bookseller.

I started Tavistock Books in 1989, while still active in my U. S. Coast Guard career, and as an active collector of Charles Dickens material, then using the fledgling business to dispose of duplicates one invariably accumulates as a collector, and to, ahem, avail myself of the traditional trade discount on my purchases.  I got serious about bookselling in the early-to-mid 1990s, knowing my day job as a Coast Guard officer was coming to an end.  I retired from the Coast Guard 1 July 1997.  Coincidentally, that same year the Naval Air Station in Alameda, California closed, which occasioned depressed rents in the Alameda west end, creating an affordable opportunity to open a shop on Webster Street.  My shop's opening day, 15 July 1997, then came, 2 weeks after my CG retirement, where the Alameda mayor cut the ceremonial ribbon, and I officially opened my door to the book-buying hordes.  Well, that was the initial idea anyway. Even though the hordes never really appeared, that day was a highpoint in the 30 year career recently celebrated. I had become a full-fledged bookseller, although I’ve never entirely separated myself from the collector I’d long been.  Hence, to this day, as a memento, I’ve kept the ribbon the mayor cut as the doors opened and the throngs... well, I’ve learned to survive by other means.

My business concept always centered on “first editions, rare & collectible” [I had it painted on my shop windows] but I soon realized that meant a focus on mail order: catalogues and direct quotes.  Webster Street was fine as a place to keep the books, if not to actually sell them.  What would, in time, make the difference for me, was the then fledgling Internet that was blossoming into life.  Without it, I was in a quiet neighborhood in Alameda.  With it, I was out in the world and able to both buy and sell nationally and internationally.  In addition, in 1995, sponsored by Peter Howard, the bookselling guru on University Avenue in nearby Berkeley, I was accepted for membership in the ABAA and this ABAA membership offered important opportunities for gaining colleagues, knowledge, friends, networking and book show opportunities, not to mention conferring a stamp of professionalism and legitimacy.

As to my perspective on my 30 years as a bookseller, the field has been in transition.  Early on I would send letters with offers, wait several weeks for a reply and, frequently enough make a sale.  Understanding both the buyer and the material was crucial.  With the coming of the Internet the world grew smaller and my sales shifted from offers to sell to requests arriving from clients finding my material on line.  As to patterns in the trade, I’ve found them difficult to predict with any certainty, but as I’ve gained experience and knowledge, I’ve been able to acquire material based on this instinct honed by 30 years in the trade.  If, when I was younger I hesitated, with advanced age, I’ve become decisive.

I’ve more than once been asked what precipitated this 3 decades of bookselling…  looking back, I always recall my first big 4-figure sale, which happened in the early 90s.  It was a sleeper found in a San Francisco shop, purchased for $40 [less trade discount] and sold for $1250.  That was cool!   If only it was that easy every day!  Long term success, I tell new booksellers, depends on two factors: what you know and who you know.  Invest in yourself, it will pay dividends.

And as I now contemplate my twilight years, I’m honored to have been elected, in February 2018, President of the Antiquarian Booksellers’ Association of America [ABAA], which is, to my mind, and in the minds of many, the leading booksellers' association in the world.  The ABAA has long stood for honesty and accuracy and it’s a matter of personal pride to have this responsibility.  In specific terms it means fostering communications and new membership and it’s a good fit for a person on the sunny side of 70 [yes, I’ve sponsored members who were in their seventies at the time of their application], who enjoys mentoring and sponsoring younger booksellers.  I’m proud to say that over the last 3 decades I’ve played a sponsorship role for some 30 ABAA members.

And as to the future, I think the antiquarian book trade will be fine.  We sell artifacts, and just like the antique furniture trade and classic car trade, I don’t see peoples’ desire to own, really possess, going away.  Buying and selling informs and conveys who we are.  And I’m a bookseller who delights in introducing and sharing with others my enthusiasm for the printed word.  And now at this 30th anniversary I can clearly say, given the chance, I would absolutely do it all over again. It’s a wonderful life.