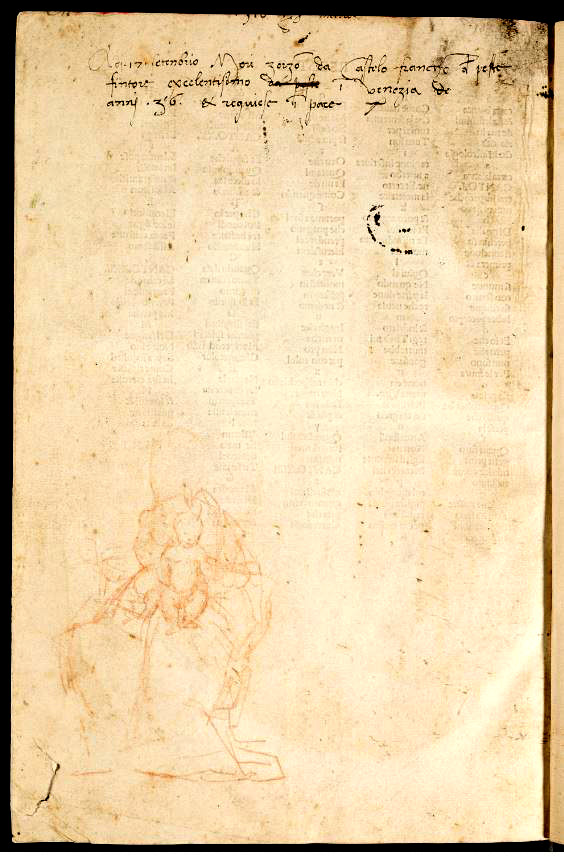 There are two dreams we have when discovering an old book in the attic. One is that it is of great value; the other is that there is something of great value tucked away inside. The latter happened at the University of Sydney Library in Australia recently, but the value is beyond great. It could well be stupendous. Here is the surprising story.

Kim Wilson of the Sidney University Library was going through the pages of a 1497 edition of Dante's Divine Comedy when she came across a drawing on a blank page near the back of the book. The image is in red and more faded than you would like, but it can be seen. It appears most likely to be a drawing of a Madonna and child. You might think it was just some doodling, but obviously it was by someone with artistic talent. Still, it is unlikely to have been a big deal as the identity of the artist would be indecipherable but for one thing - there is some writing at the top of the page. It is in Italian.

Ms. Wilson contacted Emeritus Professor Nerida Newbegin of Italian Studies for a translation. No one could have expected what that would reveal. The translation reads:

"On the day of 17 September, Giorgione of Castelfranco, a very excellent artist died of the plague in Venice at the age of 36 and he rests in peace."

Giorgione is something of a mystery. He is considered one of the greats, but little is known of him or his work. He was active in the first decade of the 16th century, and at one time, many paintings were attributed to him. He was something of a default for paintings of a certain style. Those attributions are no longer believed. It is now thought that maybe six known paintings were created by this master, but other sources say only three prior to this discovery. The difference may be that some of his paintings were completed by others after he died in 1510. At that time, the plague swept through Venice and Giorgione was one of its victims.

While Giorgione may have little corpus available now, and consequently is not that well-known outside of knowledgeable circles, he was highly respected in his time. He was evidently a romantic and riveting personality. Giorgione was a contemporary of Titian, and there is some similarity of styles. It is believed that Titian may have finished some of his paintings after Giorgione died. Titian is believed either to have been a student of Giorgione or was a fellow student with him. It is also known that Giorgione met with Leonardo da Vinci around 1500. Da Vinci was well-established by then, a generation older though he outlived Giorgione by almost a decade. He is believed to have had a great influence on Giorgione.

Describing the find, Emeritus Professor Jaynie Anderson of the University of Melbourne made a stunning statement. I don't know if this is a bit of hyperbole, but she said, "Giorgione is as important an artist as Leonardo da Vinci but only a fraction of works are known to be in his hand." As important an artist as Leonardo da Vinci? This is only a sketch, not a completed work, but still, what is the Mona Lisa worth? No wonder this is a stunning find. It has just increased the known examples by one-third of an artist described by an expert to be as important as da Vinci.

The inscription above the image does provide a bit more personal information about the artist than was known before. The exact date of his death was not known. Also, if the note writer was correct about his age being 36, that puts his date of birth back earlier than thought before. That has been thought to be 1477 or 1478, not 1474.

This leaves one more question to be answered. Where did this book come from and how did it end up in Australia? The librarians do not know. All their records indicate is that it was given to the library as a donation, sometime between 1914 and 1959, probably after 1928.