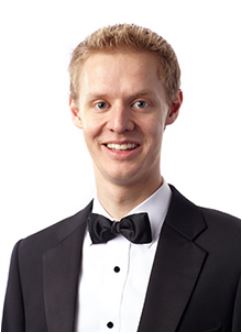 Kevin Schuwer from his days with the BYU Singers.

Kevin Mark Ronald Schuwer has been sentenced to four months in jail for the theft of eight books and a photograph from the Brigham Young University Library. The prosecutor felt that Schuwer deserved more time than that, but this is what was called for by the sentencing guidelines. Schuwer had a "clean" record, though other charges are still pending for thefts from the Utah State University Library and the Daughters of the Pioneers Library, all in Utah and involving Mormon-related books are artifacts. The sentence is actually for five years, but all but 120 days were suspended, providing Schuwer stays on the straight and narrow in the future. Since he had been in custody the past 90 days at the time of sentencing, only 30 days of incarceration were still remaining.

According to the charges, Schuwer "borrowed" the eight books from the Brigham Young library, then transferred their bar codes to other books which he "returned." As for the photograph, that of Porter Rockwell, a bodyguard of church founder Joseph Smith, he substituted a copy for the original. The books were valued at $300 each, the photograph a few thousand.

It was the theft at the Utah State University Library that got the most attention. The reason is that it was all captured on film. As the security cameras roll, Schuwer is seen examining a photograph of early Mormon apostle Orson F. Whitney in the library. He manipulates a storage box containing photographs in a manner that appears to be an effort to obstruct its view from passers-by. He looks as if he is going to put the photo back in its protective envelope, but then he slides it under the envelope and into his laptop case next to him. He then puts the empty envelope back in the pile of photographs, and later leaves the library.

That evening, Schuwer contacted a potential customer to offer him the Whitney image. When that customer became concerned about its history, Schuwer sold it to a second customer for $1,500. However, the first customer contacted an expert in early Mormon artifacts, who in turn contacted the Utah State University Library, which checked its collection and discovered the photograph was missing.

Still, the largest financial claim against Schuwer is one for which he is not being charged. On the day he was being arrested by Brigham Young University police, he had a "judgment by confession" entered in a civil suit by a collector with whom he had worked. That collector had charged Schuwer with selling him counterfeit books and artifacts, and selling some items on his behalf but failing to make payment. That judgment amounted to almost $700,000.

It is not clear how the other cases will turn out. Though his wife and two children are U.S. citizens, Schuwer comes from Denmark by way of Canada. On release, Schuwer is to be turned over to ICE (Immigration and Customs Enforcement) for possible deportation.