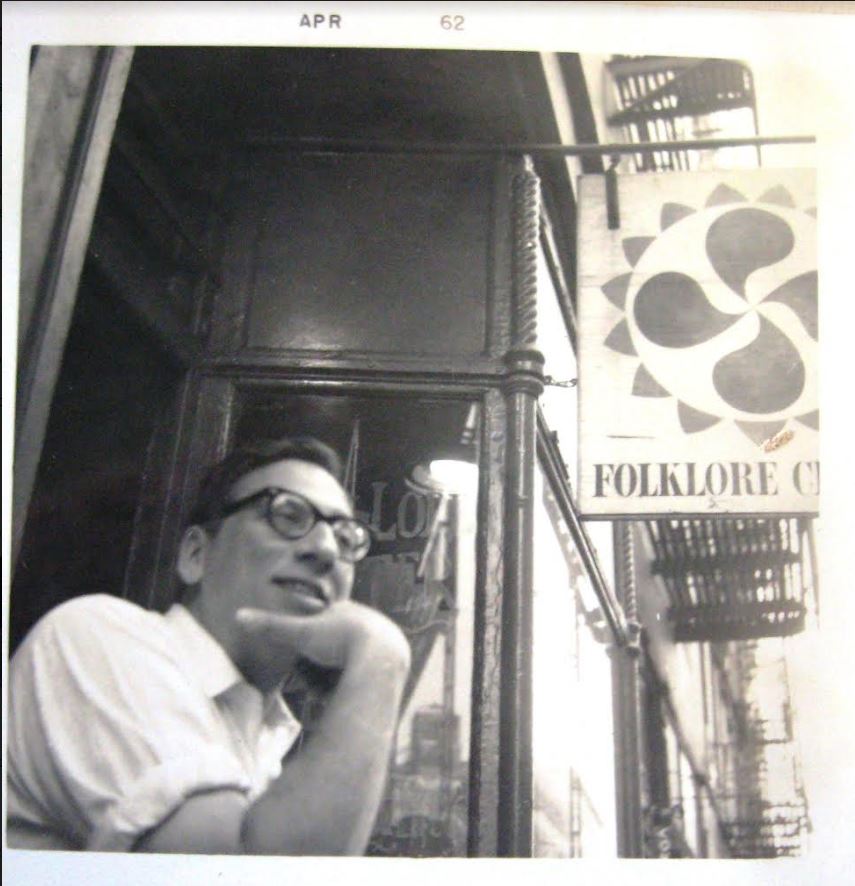 Izzy Young on the stoop of the Folklore Center, April 1962 (S. Halas photo).

Israel G. (“Izzy”) Young, noted bookstore owner and iconic figure in the folk music scene, died at his home in Stockholm on Feb. 4, 2019. He was 90. Izzy opened the Folklore Center at 110 MacDougal Street in New York City in the mid 1950s and within a few years it became a mecca for the folk scene. Personally, he was one of the book world’s most original, influential and at times irritating characters. Born in Manhattan in 1928 and raised in the Bronx, he was a little older than the youthful crowd that flocked to his shop, which by the early 1960s was a hangout and message central for all the greats, near greats and wanna-be’s in the emerging world of American folk music.

Izzy became a fan of folk music, especially folk dance as a student at the Bronx High School of Science. He attended Brooklyn College but did not finish. Before opening the Folklore Center he was a dealer in rare folk music books and, according to his New York Times obituary, his private clients included Harry Belafonte and Burl Ives.

When an Antioch college job in NYC fell through I chanced to become a clerk at the Folklore Center because my parents were in the book business and had an uncommon specialty called “Customs and Beliefs” (folklore by another name.) Izzy knew them and so I, by extension, was deemed a worthy employee.

Izzy (or IGY as he called himself) was the hub for all of it. He was my boss for that winter and spring of 1961-62 when the young Bob Dylan wandered through our doors. It was a brief and sunny moment when Izzy discovered the then unknown performer and introduced him to a world populated by luminaries like Peter, Paul and Mary, the Clancy Brothers, Odetta, Theodore Bikel, Dave Van Ronk, and Jack Elliott. All of those talented folk artists and many more flowed in and out of the Folklore Center swapping gossip, fingering the merchandise, buying a book here and there and endlessly accompanied by the sounds of banjos and guitars being tuned and played in the background.

It wasn’t so long ago I read that Bob Dylan had turned 70, but that cold New York winter Izzy was 34, Jack Ballard (aka Jack Prelutzky), Izzy’s assistant was 20, Bob Dylan was 20 and I was a barely legal 18.

Physically the Folklore Center was not much. It was a long narrow shop, walls lined with books, records and instruments, and a backroom with a fireplace where everyone hung out. I vividly remember sitting there with Dylan who was a frequent visitor. He was pleasant, talented, low key and earnest. The moment I remember best is when we were paid to distribute leaflets for some Highland dance event. Instead, we fed the flyers to the fire and talked about our respective ambitions. His ambition was to get to know Woody Guthrie better. My ambition was to move out of the vast but freezing loft I rented on the Lower East Side into something smaller with electricity.

America in 1961-62 had yet to hear the Beatles and the prevailing ideas of cool were Beatnik inspired. Gerdes Folk City, where Dylan spent a lot of his time, was just gaining steam and folk music was considered to be a short lived hybrid, rather than a part of mainstream popular music. Dylan would change all that and soon, but none of us knew that yet.

The people on MacDougal Street who were considered the real comers were Dave Van Ronk, and “Ramblin’" Jack Elliott, who was first an influence on Dylan and soon rapidly eclipsed by him.

That was the winter Izzy, who was always ready to back new talent, decided the young performer should make his Carnegie Hall debut under the sponsorship of the Folklore Center. As I recall we sold very few tickets ($2 each) and it was probably the only time that a Bob Dylan solo appearance did not put money in the pockets of a promoter.

I wish I’d saved some of the memorabilia from that period like the “Talking Folklore Center Blues” that Dylan wrote to commemorate the store:

‘You get a bumper and I'll get a fender

We'll go down to the Folklore Center

You get a daft and I'll get dizzy

What did the fly say to the flea

Folklore Center is the place for me.

What did the belt say to the suspender

You got to support the Folklore Center.”