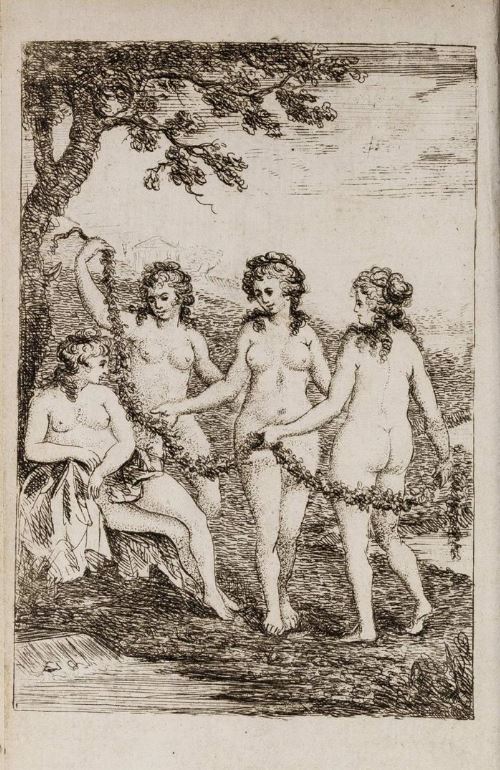 An illustration from Harris's List of Covent Garden Ladies.

Up until a spin-off in 1973, the collections that later formed the British Library were part of the British Museum. They had been given books, to use the words of an earlier time, wanting in "redeeming social value," by people who collected such stuff. This had been going on for over a century, but the British Museum was trapped between preservation and acknowledging possession of material deemed disgraceful, at least publicly. So they kept it away from everything else, locked up in its own special case. Hence it was given the name "Private Case" collection. After all, this collection was begun during Victorian times, and Queen Victoria was not exactly known for her libertine moral views.

Once the British Library was separated from the Museum in 1973, authorities became more liberal with the collection. Barriers to viewing it were lowered, and eventually, anyone could see it if they requested. Nevertheless, its existence was not widely known, the British Library not exactly promoting it. And, since it was not separately cataloged, it was hard to find the material. It was buried in there with the cards for millions of other books. You needed to know exactly what you wanted to see it.

Now that has all changed. The 2,500 volumes in the Private Case collection have been digitized with the assistance of Gale, a database provider. The material can be viewed on screens in the British Library's reading rooms, or at any other library that subscribes to this database. You might want to encourage your local library to subscribe if they don't already (they probably don't).

The oldest title in the collection comes from 1658, Rare Verities: the Cabinet of Venus Unlocked and Her Secrets Laid Open. Today, the title of such a book would be less subtle and more straightforward, but you can still figure out what this one is about. The 18th century brought perhaps the most famous of early British erotic tales, Fanny Hill or Memoirs of a Woman of Pleasure. It was radical for its time, though the language is a bit stilted for today's audiences, who prefer little left to the imagination. There is the 20th century's The Story of O, said to be the dirtiest French novel ever written. This is from the land that produced the Marquis de Sade, no less. It must be something special. Unlike most of this pornography, it was written by a woman, Anne Declos.

Speaking of the good Marquis, de Sade is found in this collection too. It has been over two centuries since he graced the literary scene yet his writings are still way too depraved even by current standards. You can call his work "timeless."

And then there are the Merryland books. These were first published in the 1740s. These, like others of its age, are both subtle and obvious, not so clear as to incur the wrath of censors, but not so subtle that their meaning could be misunderstood. Among their authors was one Roger Pheuquewell. One suspects that was a pseudonym.

Of a more practical nature was Harris's List of Covent-Garden Ladies. This afforded lists and addresses of working women, including details about their attributes and specialties. Miss Sp-nc-r of 35 Newman Street "is never so good a companion as when a little enlivened with the juice of the grape." Of Miss Fr-m of Berwick Street we learn that her "parts below are very conveniently adapted to any size."

Who says history has to be dull?