Dallas and the Maroons: God’s Will 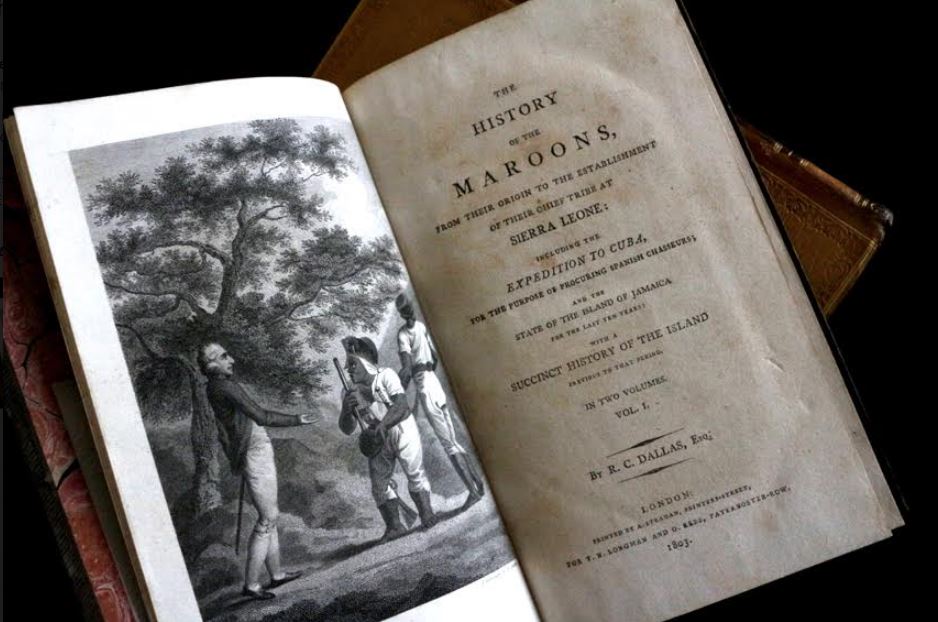 The Maroons were runaway slaves of the New World, who chose a life of hardship rather than of submission. In Jamaica, they fought against the colonists for decades, almost bringing the island to its ruins. But in 1739, the British offered them peace and freedom! Unfortunately, accordingly to the signed treaty, they turned slave hunters. Their terrible story was told in a book, published in 1803 by Robert Charles Dallas (1754-1824), The History of the Maroons (London, Longman and Rees).

As soon as 1656, Governor Sedgwick realized that the Spanish slaves, who had run in the hills when the English took the island in 1655, would become a "thorn in the side" of the colony: “Having no moral sense (...) and not understanding what the laws and customs of civil nations mean," he wrote, "we know not how to capitulate or treat with any of them.” Rejecting all bribes and compromises, they became known as the Maroons (from the Spanish ‘cimarrons’, savage), and made themselves formidable. “A small body of Negroes (they were 600 in 1739 and 1,400 in 1788),” Dallas writes, “defeated the choicest troops of one of the greatest nations in the world, kept an extensive country in alarm, and were at length brought to surrender, only by means of a subvention still more extraordinary than their own mode of warfare.”

Actually, they didn’t surrender—they simply accepted the truce offered by the English. In fact, although a confession of weakness, the truce of 1739 may be regarded as a victory for the Europeans. First, because it put an end to an exhausting and humiliating war; second, because the terms of the treaty turned the Maroons into runaway slave hunters—and they were quite good at it. “In the rebellion of 1766,” Dallas writes, “the Maroons brought in the head or person of every slave in rebellion, in the space of one month.”

Edward Long, a typical English planter who considered that God had placed the Negroes in the hands of slave masters for their own good, rejoices in The History of Jamaica (London, 1774): “This contest, which while it lasted, seemed to portend nothing less than the ruin of the whole colony, became productive of quite contrary effect in the end; insomuch that we may date the flourishing state of it from the ratification of the treaty." R.C. Dallas, who was born in Jamaica and who married the daughter of a slave-owner, thought exactly the same—but he added a shade of hypocrisy to the offense. Although horrified at the consequences of the French Revolution, he was yet influenced by the "Philosophes des Lumières": “God forbid that I should support a position of which the object were to diminish the happiness of my fellow creatures!”

But what if slavery was actually a positive opportunity for the Africans? Since “the colonists rescue these unfortunate blacks from a state of horrid and savage slavery (in Africa), to place them in a mild and civilized state of servitude,” then, “slavery may be made a blessing, if it be not already one.” Dallas might have deemed himself “an enemy of the very name of slavery”, he couldn’t reasonably go against God’s will, or, as he puts it, against “what He permits”. Of course, the raging abolitionist movement in Europe had forced the slave owners to adopt more humane practices, and the condition of slaves had actually improved at the turn of the 19th century. Nevertheless, God permits us to doubt Dallas when he claims that “in Jamaica, the evil of servitude to whatever height it may have formerly have arisen, is now assuaged by institute, and tamed by manners,” adding that “the general treatment of the negroes in this island is temperate and human.”

The History of the Maroons (London, 1803) is a gorgeous set of two in-8° volumes, that was never reprinted. It is also an unexpected work—the only contemporary one dedicated to the Maroons, a “vulgar” topic for most writers at the time. The first volume opens on a frontispiece, the unique known representation of the most famous Jamaican Maroon ever, Cudjoe. In 1690, he partook in the “first Maroon war”, a general uprising of slaves which didn’t reach as far as expected. Cudjoe was among those who sew asunder the skull of their master to drink his blood from it, before running to the hills of the Blue Mountains. On the engraving, he looks like a deformed dwarf: “Cudjoe was rather a short man, uncommonly stout, with very strong African features, and a peculiar wildness in his manners. He had a very large lump of flesh upon his back.”

Dallas tries to remain impartial in his book, even clashing several times Bryan Edwards’ exaggerated descriptions of the Maroons’ fierceness (The History of the British Colonies in the West-Indies, 1793), claiming that “many of the horrors attributed to them are void of foundation.” He then adds: “No woman in child-bed, no infant at the breast, was ever put to death by a Maroon.” Yet, we cannot help but wonder: did Cudjoe really “threw himself on the ground” that very day, to “embrace the legs” of the British officer? “He seemed to have lost all his ferocity, and to have become humble, penitent and abject.” This is the only detailed description of this historical meeting—where did Dallas get all this detail, he doesn’t say—probably not from the Maroons. But although they may be partial, these extraordinary pages take us right under this “large cotton-tree” of the Maroons’ camp where the treaty was signed.

The second folding map of the set describes the cockpits country, seat of the second Maroon war of 1795-96, in the parish of St James. This is the heart of Dallas’ book, the last war led by the Maroons—those from Trelawny Town, that is; led by the dreadful Johnson, just as nearby Haiti (then Saint-Domingue) was sinking into blood following the French Revolution. In Jamaica, the “temperate and human” colonists hardly slept at night, fearing their slaves might imitate the French’s. So when the dreaded Maroons went to war, it was bad news.

In doing so, they only reacted to the ill-treatment received by two of them in Montego Bay, and to the firing of John James, the superintendent of their settlement of Trelawny Town, whom they loved with a passion. A white man, he yet matched their physical abilities. “Barefoot, he equaled the speed of the hardiest Maroons over rocks and precipices, darting on with an agility peculiar to himself,” Dallas writes. “He was indefatigable in every pursuit to which the Maroons were accustomed, and nothing that he pursued escaped him.”

Dallas knew several officers involved in the second Maroon war, including Robertson, who drew the maps joined to his book. He had first-hand information, especially about the battle of the Guthrie’s defile, in the cockpits country, the stronghold of the Maroons. Once again, their knowledge of the country, and their guerilla tactics paid off. They ambushed the company of Colonel Fitch, killing many, including Lieutenant Tomlinson, “whose head was cut off, and afterwards seen suspended by the hair to the bough of a tree. It was imagined that he owed his death to the loss of his spectacles, by which he missed the route taken by his comrades.”

The Maroons of Accompong Town, disagreeing with those of Trelawny, took arms against them alongside the English! Two of them, namely Captain Reid and Badnage, were thus with the English when they were attacked by some invisible Maroons, who fired at them from hiding. “Colonel Brissett, wounded, was seen staggering to the right, and probably fell dead among the bushes. Reid, the Accompong, gave a loud shriek and fell; Badnage (...) fell dead without a struggle or a groan.” Colonel Jackson then ran to Colonel Fitch, whom he found bleeding and “mortally wounded.” When the Maroons fired again, Fitch was hit by a “fatal ball, which penetrated (his) forehead just above the right eye, and he fell lifeless.”

The frontispiece of the second volume is also unique—it represents a Spanish chasseur with his dogs. At one point, it was indeed decided to call upon some chasseurs from Cuba to track the Maroons entrenched in the impenetrable defiles of the cockpits country. “The animal is the size of a very large hound, with ears erect, which are usually cropped at the points; the nose more pointed, but widening very much towards the after-part of the jaw. His coat, or skin, is much harder than that of most dogs and so must be the whole structure of the body, as the severe beatings he undergoes in training would kill any other species of dogs.” The idea of using dogs against men was horrible; and reminded the dark days of the conquest of America by the Spaniards, and their blood-thirsty hound dogs. But these dogs “will not kill the object they pursue unless resisted. On coming up with a fugitive, they bark at him till he stops, then they crouch near him, terrifying him with a ferocious growling if he stirs.” Eventually, seven weeks later, 40 chasseurs and 104 dogs arrived in Jamaica. Fortunately, the dogs were never used against the Maroons—let’s bear in mind that the English were “temperate and human” people—, who surrendered rapidly after they arrived, since allegedly terrified by them; so Dallas says. End of the History of the Maroons? Not quite.

The history of the Maroons is fascinating. Former runaways, they defeated the English for several decades before becoming their best allies in fighting runaways. When the last war broke, some Maroons turned against other Maroons! Refusing to give up their freedom, and identity, they were yet deeply attached to Jamaica—when, following the war, the Governor of Jamaica took a pretext to send them off to Halifax, Nova-Scotia, it was the worst punishment they could have expected. The Assembly of Jamaica did what it could to maintain the Maroons as long as possible in this cold weather. But at the end of the day, they demanded to be sent to a warmer country. They consequently went to Sierra Leone, Africa, where some English abolitionists had reintroduced former slaves, who had turned banditti. The Maroons soon forced them to beg for mercy! Going back to Africa is a dream for many nowadays Jamaicans, especially those who follow Marcus Garvey’s doctrine of repatriation. But in the early 19th century, many children of the exiled Maroons went back to Jamaica... to return to their roots!

Dallas is better known today for his Recollections of the Life of Lord Byron from the year 1808 to the end of 1814—they exchanged letters for a few years. Yet his History of the Maroons is a silent classic about Jamaica. It might have been better, had the author focused on his topic rather than giving a whether-too-long-or-too-short history of the island in his preface, and shared his thoughts on sugar-cane or slavery (and the way to convert the slaves to Christianity). Yet, by publishing it, he embodied a story that is still told today. The Maroons still exist in Jamaica, where they proudly perpetuate their culture.