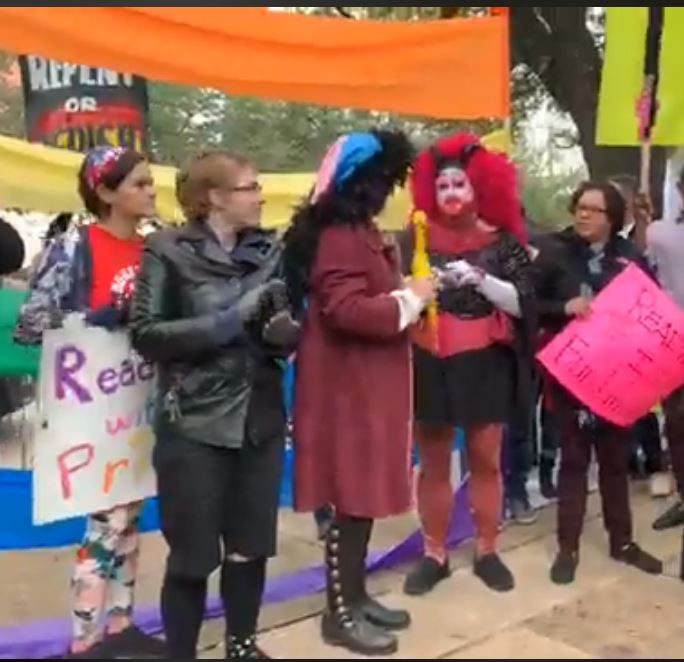 Libraries have frequently found themselves in the middle of censorship controversies, someone or other wishing to ban books they dislike for some reason or other. The Houston Public Library recently defeated an attempt at censorship, but it was not the typical book banning controversy. Books were part of the issue, but it involved a "story time" program it was hosting. Specifically, it was something called "Drag Queen Storytime." Oh, the stories they tell!

Drag Queen Storytime took place on four dates in one of the Houston Public Library's neighborhood libraries. It was promoted with a few posters and a mention on their website. Some materials were purchased for it. It invited people to dress up and "let your imagination run wild" as you joined local Drag Queens for story time. There was also a motive beyond just fun. "These vibrant Queens will help to instill a sense of love and acceptance in our children while encouraging them to be true to themselves." The point here was to encourage acceptance and tolerance for those in the LGBTQ community, and to build self-esteem among members of that community, who often grow up being told that there is something wrong with them.

This exercise in acceptance was not well-received by all. The library was sued by a pastor and several others (the plaintiffs) who, presumably, had conservative religious views. However, not liking something is not grounds for a legal action. There needs to be something illegal. The plaintiffs argued that this was a violation of the First Amendment of the U. S. Constitution, the one that states "Congress shall make no law respecting an establishment of religion, or prohibiting the free exercise thereof..." As a result of the 14th Amendment, this requirement now applies to state and local authorities as well as federal ones.

Obviously, the Drag Queens, and the larger LGBTQ community, offended the religious sentiments of the plaintiffs. However, that again, is not a cause of action. The Queens weren't interfering with their ability to exercise their religion, so the plaintiffs turned to the other part of the First Amendment. They claimed the Houston Public Library's holding a "Drag Queen Storytime" amounted to the city establishing a religion. What religion?

The plaintiffs' answer sounded rather odd - secular humanism. It sounds odd because "secular" means things that are not religious. Secular humanism must be a religion of non-religion. It is hard to wrap one's mind around the concept of secular religion. It seems an oxymoron, like civil war or jumbo shrimp.

Evidently, Judge Lee Rosenthal of the Southern District of Texas wasn't particularly impressed with the arguments either. She dismissed the case on two grounds. In the first, Judge Rosenthal wrote that the plaintiffs had no standing to sue as they had not been personally harmed. They had not attended the story time, and eliminating it "will not cure their perceived feelings of persecution."

As for the more important constitutional claim, Judge Rosenthal found that wanting as well. In this case, the judge concluded that even if you accepted the claim that secular humanism is a religion (and that was the "religion" of the drag queens), there was no evidence that "Drag Queen Storytime" was one of their religious activities. She wrote, "There is no allegation that a reader discussed secular humanism at the event, or that any story the Library selected invoked secular humanism or any religion at all. The plaintiffs instead make only conclusory statements associating secular humanism with the event...The complaint alleges no facts supporting these conclusory statements. Because the plaintiffs do not allege facts that do or could show that the event is a religious activity, there is no issue of establishment of religion, and the complaint fails to state a claim for relief."

This may not go down as one of the great freedom of speech cases, but these are times when every victory counts. There are lots of things other people do that I don't like, but if it doesn't affect me (or other innocent bystanders), it's none of my business. Live and let live. One small step for a drag queen, one giant leap for freedom of speech.