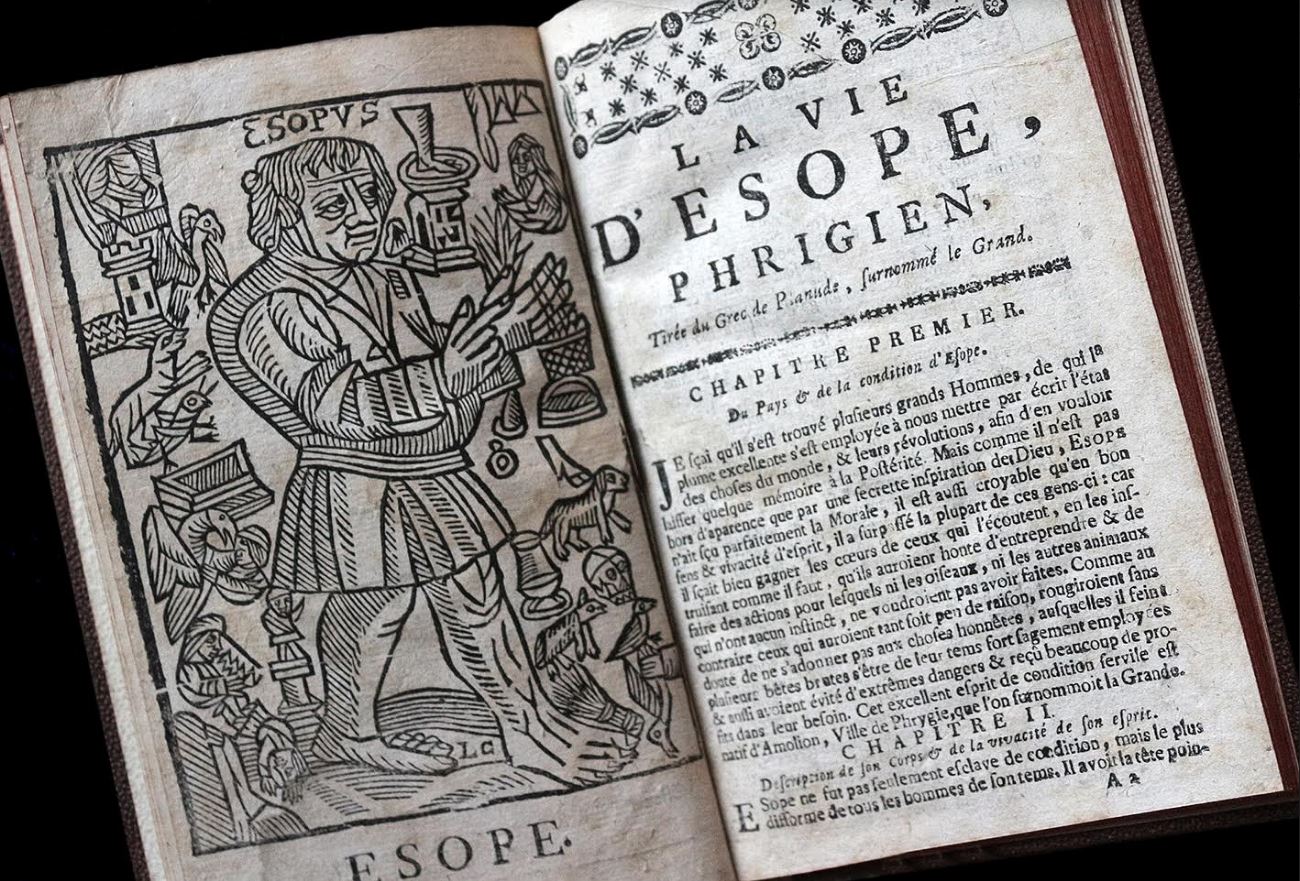 Around 1775, printer Pierre Seyer from Rouen, France, put out a peddling book with dozens of engravings, La Vie et les Fables d’Esope—The Life and Fables of Aesop. Originally written in the 7th century BC, Aesop’s tales were still very popular. Yet, in the late 17th century, Jean de la Fontaine had given his own version of these fables, and the outstanding result eventually overshadowed the original. As the fable (almost) goes, the most talented always prevails.

The city of Rouen, France, is famous for its peddling books of the “Blue Collection” (Bibliothèque bleue1). Those cheap popular books became very fashionable in the 19th century, but were printed in Rouen as soon as the late 17th century. The idea was to provide affordable readings, meaning small and thin books, printed on bad quality paper with worn out characters. Most of them came without engraving. “Images are rare in the Blue Collection,” Ségolène Le Men writes2. “Only 38% of the books are illustrated—half of them with a unique illustration. The “Normand corpus” that developed (...) from the end of the 17th century to the Second Empire, first in Rouen then in Caen, only offers 13.5% of illustrated works (...) according to the catalogue of 273 books given by Hélot3.” The Fables of Aesop, an 84-page in-8° volume, is an exception—printed by Pierre Seyer, it features a full-page frontispiece, a title page vignette and no less than 113 small woodcuts. “Although a woodcut initially cost ten to twelve times more than a copper engraving,” Le Men states, “it was cheaper on the long term, as the wooden blocks could be re-engraved over the years.” At the time, this type of illustration, Renaissance style, was already old-fashioned—the frontispiece representing Aesop was actually copied from a German book of 1479. Hastily done and ill printed, indeed; using several times the same woodcut to illustrate different fables—sometimes with no link whatsoever with the said fables? True. Uneven lines of text, tamped paragraphs and half-printed letters? Nothing matters, as the strength of this book comes from its very weaknesses. They are moving traces of the human hand. Even the fragility of the thin paper seems to reflect our own. Consequently, flipping through this modest book is a time-travelling experience: one can almost hear the noises and smell the ink and fresh—and thin—paper inside the print shop Le Levant, located rue Ecuyère, in Rouen. Closer to you my Lord!

Book collectors grew particularly interested in peddling books during the 19th century, and luxurious bindings from this period are quite common. Our copy was bound in half-vellum around 1850—pages were cut, probably to get rid of worn out ends, and then the hedges re-coloured. Someone took real care of this originally low-cost book. The Permission (to print) was, so the last page reads, given in Paris, on October 17, 1751 by De Marcilly. This is surprising. Indeed, according to the French National Library (FNL) Pierre Seyer “started his apprenticeship as a printer in Paris, on January 29, 1762, and quit the following August.” He married the widow of Jean-François Behourt, a former printer from Rouen, and “following a fictitious apprenticeship with Étienne-Vincent Machuel (between 1762 and 1763), was established printer by the Council on March 18, 1763.” He was clearly not printing books in 1751—he was only 16. The same intriguing date also appears in his famous publication, Figures de la Sainte Bible (Rouen). In 2014, the auction house Alde, in Paris, listed a copy of the latter: “The approbation of this edition is dated 1751. Pierre Seyer having worked between 1763 and 1787 in Rouen, we can date this edition around 1775.”

Aesop’s fables ending up in the “Blue Collection”, especially with so abundant illustrations, meant that they were very popular. Pierre Seyer used the reference translation of Jean Baudoin4. “Between 1619 and 1631,” Anne-Elisabeth Spica writes5, ”Baudoin read and translated most of the main compilations of fables available.” And his translation of Aesop was still used 250 years later! Today, every French kid knows about Master Crow holding a cheese in his beak and being fooled by the cunning Mr. Fox. As the mean Mr. Wolf eats up the innocent lamb under some false pretence, they also learn that, in our world of beasts, the strongest always prevails. As a matter of fact, Aesop’s tales are deeply rooted into French culture. They are part of our collective definition, and have contributed to shaping the way we look at life. French kids know these stories by heart, yet only a few have heard the name of Aesop. In the late 17th century, the luminous Jean de la Fontaine (1621-1693) reworked his fables. He clothed them with princess dresses, using the perfect words, the perfect verses, and made more than a tribute, a masterpiece that overshadowed its model. At school, kids do not learn Aesop’s fables; they learn La Fontaine’s. The style of the latter is unbeatable, and Aesop still awaits a worthy modern French translator. Baudoin’s style, unlike La Fontaine’s, has become old-fashioned and difficult to read—especially for kids. Yet, once upon a time, he was the star of the popular “Blue collection.”

Anyway, Aesop’s fables remain a great reading that plunges you back into childhood with short, lively and instructive stories involving speaking animals that trick and murder each other. The small woodcuts also kindle your imagination, just like when you were a kid. More than 2,000 years later, the recipe still works. As La Fontaine would say: This world is old, it is said; and I believe so / However, we must amuse it like a child.

1These books were sold unbound, and wrapped in blue wrappers, ordinarily used to wrap sugar loaves—hence the name of the collection.

4See our article Suetonius and the 12 Caesars: https://www.rarebookhub.com/articles/2442/print?page_id=4490