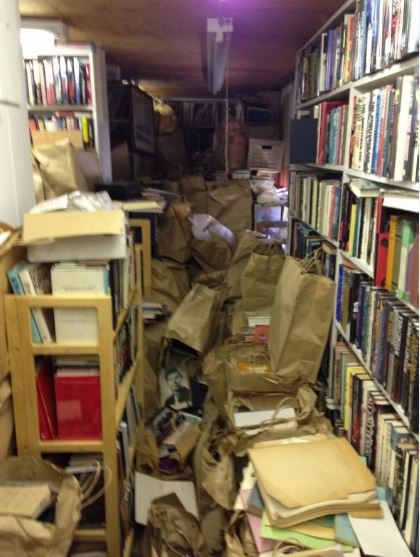 Watching the liquidation of Serendipity Books in 2013.

Looking back at almost 40 years as an independent bookseller I’ve been thinking about what has changed. It isn’t the money; though I do know a few dealers who’ve built a profitable business, for most of us it’s been a cross between a downward spiral and an uphill struggle. Yes, there are several of my contemporaries who cashed out rich, but more often the wealth came from the sale of real estate, rather than any financial wizardry in the intellectual pursuit departments. Ignoring fame and fortune, what seems to have shifted the most is the personal relationship that the dealer often built with clients.

I can still remember many of the people I met when I was starting out in the late 70s. They were travelers on holiday, collectors referred to me by my parents, fellow dealers I’d run into at book shows, librarians and academics, or folks shopping at the local swap meet where I sold inexpensive books and prints with the hope it might lead to larger sales. What those customers all had in common in the pre-internet years was I met them live-and-in-person or via catalog. If we hit it off we often developed a personal relationship that endured for years. In fact, some of them are still customers to this day.

I got to know their taste, what they had, what they wanted, who to offer what and they in turn seemed to trust my judgment on value, condition, desirability. In those days selling books didn’t seem so much like the sale of a commodity as a service designed to help the customer find what was interesting, relevant and good value. In many ways it was more about the people than the books. To me the ideal customer was a person whose taste I understood and could anticipate. It was not only a search for the delicious morsel, but just as often helping people with wants in a particular area -- and hopefully the means to afford them.

But most of all, the customers from that era were repeat customers; they came back again and again. It never occurred to me that the time would come when selling books would be much like selling ladders, or brooms or any one of a thousand other categories: it would be impersonal, strictly about price and merchandise and very little about taste or friendship.

While the internet made many things more widely accessible it did not make the customers any smarter. They still didn’t know most of the basic terminology or what made one book a better value than another, that still had to be explained. But as we moved into the 21st century there was a marked change in attitude. Where the dealer - client partnership was at the core of the old business model, coming into the new century it was almost as if the person on the other side of the transaction, “the buyer,” didn’t matter, because you almost never saw, or met or more importantly, rarely had a second sale to that person.

The internet made it easier to find the customer, but for reasons that are not entirely clear to me, very few of those customers turned into a durable reliable clientele that once formed the core of the book business.

By the late 1990s, the giddy early days of eBay, when practically everything put up for auction would and did sell, the technology seemed like a wonderful assist. But 20 years later the technology often deliberately created barriers to personal interaction. The powers that be who run the listing services make it difficult for buyers and sellers to communicate directly. No matter which listing platform is used, in the end they all tended to behave alike. Book selling, once a wild and crazy, not to mention sprawling and hard to compartmentalize business, became by stages locked into a rigid predetermined format set by people who knew little and cared less about books.

In the old days the customers who had the means and inclination to build a collection usually had a genuine desire to learn. And the dealer was there to teach. Of course that is the gratifying part of the trade, providing not just the book, but the guidance, back story, thrill of the hunt and exchange of knowledge.

But as years went by the customer didn’t seem to get any smarter, perhaps because although they were given a great many more choices than ever before, they still began with a very limited exposure to the basics of buying and selling books. Yes, there was a much bigger range of material available, but there was seldom anyone there to fill in the knowledge gaps.

In the current crop of buyers I’ve noticed the bigger the wallet, the more desire to haggle or in some cases to go around the dealer altogether. The old customer looked at the dealer as a colleague, a scout, a guide, someone who supplied a lot of missing information, and usually had some specialized expertise to share, in short a friend. It was never a secret that we sold to customers for more than what we paid. That’s what made it a business and not a philanthropy.

I think the end came for me in 2013 watching the liquidation of the stock at Peter Howard’s Serendipity book shop in Berkeley. At this series of sales and auctions there was an endless array of wonderful inventory and by the final, final, final sale in the winter of 2013 it was going out the door by the carton at absolute rock bottom prices. Dead, gone, finished.

I still encounter sellers like Howard, who knew it all, had seen it all, and had it all within arm’s reach (and what’s more remarkable could usually find what he was looking for if you’d give him a chance to look in the piles, bags, rows, cartons of unsorted inventory); yes there are still people like that around, but not very many. Peter Howard seemed like the last of the breed: he took it all in on a handshake, and he settled up when he sold. Following his death one of the biggest headaches for those who had to neaten up the edges was to determine what was really his and what had he taken in as a favor on consignment. In the end it was all sold for lower and lower prices, and to no one’s surprise, there don’t seem to be many bookstores like that any more.

Today’s seller operates in a much more impersonal world and sees a larger and larger portion of revenues going to the techies in the middle: fees and commissions, and fees for money transfer services. In the early days all of these costs seemed within bounds and it was a joy to sell quickly and the nominal fee for the assist, seemed both reasonable and mutually beneficial.

Now that’s changed a lot. Today it seems like I am working for eBay; they are not working for me. They are thinking of new ways to suck up my revenue, to clutter up my selling platform, to make peremptory design and tech changes to the site or protocol without explanation in order enrich their share even further. It really galled me when they started taking a commission on shipping cost. That action alone made it clear we weren’t in Kansas anymore. How is it possible to charge a commission on an expense?

The place where I see this most clearly is who has the customer? When the internet started, it brought the buyer and seller together. In recent time the focus is in keeping them apart; eBay no longer includes the buyer’s emails when the transaction is complete, because eBay thinks it’s their customer, not my customer. I just happen to have something that person wants however momentarily. But the customer, let’s be clear, they think it’s their customer. I’ve been listing on eBay for many years and I have various designations like “power seller.” But the truth is I no longer like or trust them, and frequently contemplate cutting the cord and going back to the old ways of doing things, or wishing the gods of tech would create a better newer way to go back to the future.

Remember, Amazon, which changed the entire landscape of global retail and started the death cycle for the physical store, began with books. Amazon killed the traditional way of selling books and then proceeded to gobble up everything else in sight. I hope I live long enough to see the next major technical innovation or disruption bring back the personal relationships to the business side of books.