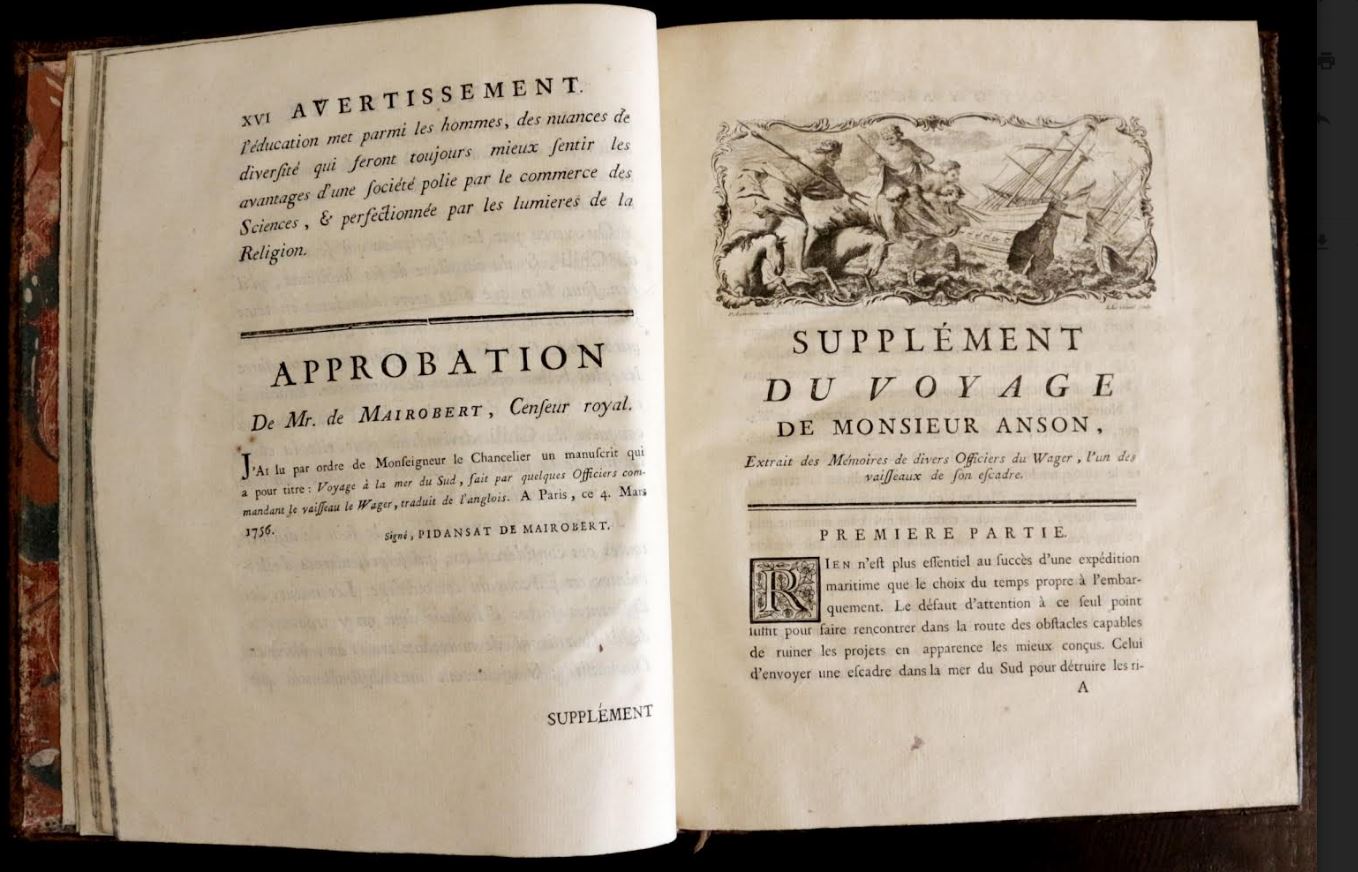 A voyage on the good ship Wager.

Although sub-titled “a follow-up to Anson’s voyage”, and sometimes bound with the latter, Voyage A la Mer du Sud1 (Duplain Brothers—Lyon, 1756) is actually an independent publication, the spin-off of one of the deadliest sea expeditions ever. Anson left England in 1740 with 1,854 men, and returned with only 188 of them, four years later. A few more made it back on their own, two years later. This book tells their story.

“Nothing could be more exciting than the fate of an English fleet boldly sailing the wide ocean in order to sack the Spanish settlements on the Western coast of Peru and Mexico,” declare Benoît and Pierre Duplain, talking about Anson’s voyage. As a matter of fact, first published in French in 1749 (Arkstee and Merkus)—one year after the English first edition (London)—, it was very successful; insomuch that it was twice illegally reprinted in France before the second official edition of 1751 saw the light. In the second preface, the publishers, Arkstee and Merkus, castigate those “two ugly counterfeit editions of Paris and Genève”, praising their own for its “copper plates engraved by the best Masters”, its “quality paper” and its “world map drawn by Bellin, showing the path taken by the expedition.” As a matter of fact, this is the best French edition of Anson’s voyage.

Duplains’ Voyage à la Mer du Sud tells the misfortunes of The Wager, one of Anson’s fleet. Just as the expedition came out of Le Maire Strait, the ships were hit by a terrible tempest. “The Wager and her 150 men suffered the most,” the preface of our book states, “losing her masts, being isolated from the rest of the fleet, and unfortunately running aground on a small island on the Western coast of Patagonia.” The rest is of nothing but mutiny, pains and violent deaths—a reader’s delight, indeed. Back to England, several survivors published the account of what they had gone through. The French translator, Abbé Rivers2, compiled four of these memoirs: Bulkeley and Cummins’ (London, 1743), Alexander Campbell’s (Dublin, 1747), Isaac Morris’ (Dublin, 1752) and an anonymous one—actually John Young’s (London, 1751)3. “Their accounts, naive and simple, carry the seal of truth,” states Abbé Rivers. They were, he adds, genuine, and recognized as such in England, “although they didn’t reach their goal, which was to justify their authors from rebelling against the authority of Captain Cheap.”

There is no engraving in Duplains’ book, except an allegoric vignette on page 1, taken from Histoire Navale d’Angleterre (Duplain, 1751). It comes as follows: half-title page, bicoloured title page, xvi pages (forewords), 185 pages, xiv pages (contents). The text itself was brilliantly put together. Abbé Rivers writes: “The original memoirs were written without order or correction—no way could we have published them in their neglected and gross form. Their authors, good sailors but no men of letters, used a raw and rambling style(...). Their adventures are drowned in useless discourses, weird and dubious constructions, and vulgar ideas and commonplaces.” He then discloses the structure of his work: “I’ve divided the narratives into two parts. The first one deals with the shipwreck of the Wager, the stay of the crew on the island, and the voyage of those who went to Brazil through the Strait, until they eventually reached England. The second one focuses on the eight men, who were left on the Eastern coast of Patagonia—we follow them through their voyage to Buenos-Aires where they meet up with Sir Campbell, who tells them about his own voyage with Captain Cheap, that led them to Chile—then, they all embark on a Spanish vessel heading to England.” The French publisher expunged all details about latitudes, wind directions, etc. This book was definitely conceived as a tale of adventures—and sure it is!

The misfortune of the Wager is mentioned in Anson’s voyage, but “only in a few words,” deplores Abbé Rivers. The aforementioned tempest lasted for three months, exhausting the men and isolating the Wager from the rest of the fleet. When she then came perilously close to the shore, the crew warned Captain Cheap, but he didn’t listen, and “on the 14th, at about 4 A.M, the stern of our ship hurt a rock under the surface.” This wreck, an “unforgivable fault”, is here blamed on Mr Cheap. The crew partly left the ship to seek refuge on the nearby shore—but on board, the sailors remained deaf to orders, and “pierced the barrels of wine and liquor, and drank until they were drunk; then taking some swords and pistols, they broke the chests, cracked the safe, looted the money and put on the best clothes they could find.” Several fell from the deck, and drowned. Others even fired a gun at the Captain’s hut ashore, probably thinking he had abandoned them. A few days later, following a quarrel, Captain Cheap fired his pistol at one Cozens without warning—he died a few days later. “This shotgun, discharged at the head of a man without further ceremony, is but a dark assassination,” reads our text.

54 men had perished during the wreck, only 100 were left on this unfriendly island covered with snow, and the few Natives who lived nearby were of little help. “Food was getting scarce, we had become starving wolves running up and down for a bone. (...) At times, it was so cold we couldn’t even get out of our shelters. Staying on a sad shore, in a savage and ungrateful country, far away from home, divided by inner feuds, fearing forthcoming pains, we were living a desperate life.” Five months later, a troop of 81 mutineers left the island with the two small boats. They intended to cross the Strait of Magellan, and to reach Brazil—it took them more than a month of a tedious navigation, and only 43 of them survived. They came back to England on January 1, 1743. “The Admiralty was upset; we presented our memoirs, which the Officers kindly read; but they declared that we wouldn’t be paid, and should never serve His Majesty again.” This part is taken from the narratives of John Young, Bulkeley and Cummins. At one point, they are forced to leave eight men on the eastern shore of Patagonia, 100 miles away from Buenos Aires—and their tribulations, told by Isaac Morris, starts the second Part of our book.

The eight survivors ate common seals and armadillos for three months, surrounded by fierce tigers. Some unknown assailants slaughtered four of them before they were captured by a group of Natives. “At their settlement, we were bought and sold countless times. A pair of spurs, a copper basin, a handful of ostriches’ feathers, that kind of stuff—this is what we were worth.” They lived twelve months among them: “The Patagonians, at least those who met, are tall and well-built; they are usually 5 to 6 feet tall.” At the time, some accounts, following Pigaffeta’s4, still described the Patagonians as giants—an assertion reiterated by Lord Byron in the account of his circumnavigation of 1764-65. The account of these survivors, who lived among the Patagonians, clearly contradicts them.

Three of them eventually made it to Buenos Aires, where they embarked on a Spanish ship. They served on board almost as slaves for one more year before meeting Mr Campbell in Monte Video. Campbell then told them about his own journey alongside Captain Cheap: after a few months spent on the island, they left on board of two small boats to round Cape Horn, but were soon forced to turn back. In 1742, starving to death, they tried again. During this journey, six sailors sailed away with the boat, leaving Captain Cheap behind. “We never saw them again,” writes Campbell. “There were five of us, now; we had no weapon, no clothes, no resources, and we were left in the middle of a desert of rocks and wood. This was the most terrible time of our lives.” A few months later, some Natives took them to the island of Chiloe, where they were ill treated by the Spaniards—let’s bear in mind that Anson’s expedition aimed at ruining their settlements. After reaching Chile, they still had to cross the dreadful Andes Mountains to reach Buenos Aires before embarking for England.

Capturing a rich Spanish galleon on his way back, Lord Anson turned his disastrous journey into a success—a sort of commercial redemption. But the authors of the memoirs here compiled miraculously survived hunger, fierce tigers, want, and human wickedness only to be called traitors in their homeland. “After six years of pathetic accidents that left us without money, resources or protection, we hoped to be rewarded for our pains but we were treated as rebels.” Captain Cheap, although unanimously blamed for several misdeeds, was promoted to the rank of post captain. He died in 1752. This Voyage à la Mer du sud is an Odyssey with no heroes, no glory, and no happy ending—definitely not a Hollywood spin-off.

1The National Library of Australia reads: Also titled An affecting narrative of the unfortunate of H.M. Ship Wager.

2He’s not credited in the book and his translation was, according to Barbier, reworked by Abbé Laugier (1713-1769).

3A lot of narratives came out in England at the time. In The Gentleman’s Magazine For the Year MDCCLXXX. (London, 1781), one T. Row already lists nine of them: Bulkeley and Cummins’, John Phillips’, Pascoe Thomas’, Benjamin Robins’ (credited to Richard Walter), John Young’s (published anonymously), Alexander Campbell’s, Isaac Morris’, John (now Admiral) Byron’s, and an anonymous one, of which T. Row writes: “I never could find out who this officer was."