Nivet le Fanfaron: The Rare, Remote and Pious Narrative of a Wicked Life 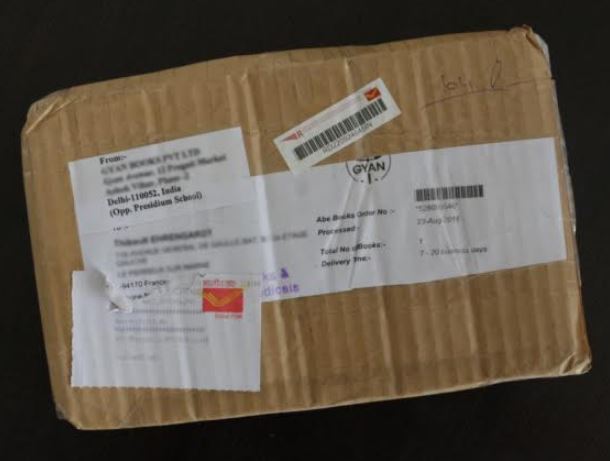 All the way from India.

Rare books have become rarer with the Internet. Yet, despite Google, some remain nowhere to be found. After chasing down a particular one for years, I gave up—and ordered a facsimile. From Delhi, India.

La Vie de Nivet, dit Fanfaron/The Life of Nivet, alias Boasty (Paris, Jean-Luc Nyon—no date, 1729), is a pretty rare 23-page brochure. It was printed at the time of Nivet’s execution, and probably very few buyers—if any—bothered having it bound. Trying, once more, to spot a copy on the Internet, I realized that it was definitely nowhere to be found. Except from a bookseller in Delhi, India—for US $4.90, shipping to France included! Of course, it was a facsimile. The price surprised me, not to mention the location of the bookseller. I ordered a copy out of curiosity. Buying a book published in France some 300 years ago, which tells the story of an obscure French bandit, from an Indian bookseller for less than 5 bucks is kind of unreal. Welcome to 2018!

It took a few weeks, but it reached. The stamp on the envelope confirmed that the parcel had been sent from Gyan Books, in India—6,568 kilometres away from Paris. What a terrible carbon footprint! I had never bought a facsimile before. I guess they get their files from Google.books—they kindly ask you to send them the scans of your rare books “so that other readers can also be benefited with your cooperation.” Apart from the modern front cover and the first two pages, it is the exact replica of the original publication of 1729. A valuable source of sources for any searcher—and cheaper than a subway ticket for Paris! Nobody knows the name of Nivet anymore, not even in France. Yet, during the 18th century, he was associated with Cartouche or Mandrin, as one of the most notorious thieves and murderers of his time. Some claim that this brochure was sold at the foot of his scaffold. Publishers did that kind of thing, indeed—selling the “life” of a man about to be put to death was quite lucrative. The biography sold during the ordeal of Cartouche, in 1721, is full of inaccurate details about his execution—no wonder, it was written before it took place. But these short-lived narratives were usually printed on a simple sheet of paper. The one about Nivet looks more like a small book. It is an official publication, printed, according to the trustworthy facsimile, by the prestigious Coignard family, and approved by the Lieutenant of police Herault. Last but not least, it was duly recorded in the Register of the Printers and Booksellers of Paris.

At the time, books going against Christian morality were banned. Yet, people loved to hear about bandits. Not only were their exploits entertaining, but also they were “rebellious” subjects who defied the unfair Ancien Régime—some sort of “noble bandits”. As a matter of fact, some were used as political symbols during the Révolution of 1789. Thus, the police were attentive to those books.

Publishers had to think about their influence on the youths as well—those narratives could kindle a young and fiery heart, setting a bad example. In the case of our brochure, the printer Jean-Luc Nyon makes it crystal clear: “This book only wants to inspire your horror for the incredible crimes a wretch can commit once he strays from God, and to exhort you to part from bad company that usually leads the youth to perdition, just like Nivet.” Fortunately, he adds, some people stood for justice and righteousness; people like “this wise Magistrate, Mr. Herault, Lieutenant of Police”—the same Herault who gave the permission of publication. Mr. Nyon sure knew on which side his bread was buttered.

At the same time, this was the regular way of proceeding with that type of book. They were under tight scrutiny. That’s what makes them fascinating, they tell a lot about their era—more than about the lives of the bandits, in fact. This one was built like a sermon against crime, and it features a “Warning to the Youth”: “The aim of any author must be public utility. (...) Never forget your Christian duty. Think about God, dedicate all your thoughts and actions to Him. May the tragic ending of Nivet and his accomplices serve you as an example, and may the prospect of an eternal life drive you away from earthly riches that corrupt the mind.” Our preacher condemns the sin, but not the sinner: “Do not label me as a strict censor, but receive this little opinion as a proof of my goodwill instead, and of the pain I’d feel to see you end up that way.”

Philippe Nivet was born in Caen, in 1696, and he started to challenge the precepts of the Bible at an early stage. First, he followed bad company, although “a companion of fools shall be destroyed” (Proverbs, 13:20). Consequently, he robbed his parents, whom he should have “honoured” (Matthew, 15:4) instead. His father was a poor but honest legless cripple. “Most commonly," explains Julius R. Ruff in Violence in Early Modern Europe 1500-1800, "the guilty person was born to poor but honest parents, origins that emphasised the danger that anyone might fall into evil ways.” Broad was the road that led to the galleys of Marseille! And Nivet walked it at only 15. When the plague hit this city of Southern France, “he took advantage of the confusion and escaped”. There he had met one Beauvoir, who taught him a lesson he never forgot: “Always murder the people you rob.” Nivet eventually came to Paris in 1727, where he soon took the lead of a wild bunch, made of “robbers and libertines”. He broke in the citadel of Les Invalides all by himself, thus entering the legend. “The titles of Chief and Captain, that he was given by his men, exhorted him to invent the most horrible and hateful stratagems to live up to them; swindles, thefts, murders, assassinations, sacrileges, desecrations and blasphemes—he did all he could to match his predecessor Cartouche.”

His gang was particularly active during holidays, religious ceremonies, shows or fairs. The book relates many dark deeds, indeed. Yet, the author refuses to give the details of what he did at Rue Coquillière “to the said Bollot de Talemet” because that “would only drive fear into the hearts of the readers.” The Court of Justice, on the contrary, printed all charges brought against him and his bad companions: “The said Nivet, Baremont and Mancion, are convicted of the robbery and assassination, a quarter mile from Rouen, of David and his wife, merchants from Amiens; as well as the murders of one Boulanger in the forest of Moulineau; of the said Chesnet, between Rouen and Le Port St. Ouen; of Mottelet’s wife and their two children in the village of La Croix St. Ouen, between Senlis and Compiègne; of the said Menard, jeweller Rue St. André des Arcs; and of the said Bollot de Talment, Rue Coquilière.” They were broken alive on the wheel. “Woe unto the wicked! It shall be ill with him, for the reward of his hands shall be given him!” (Isaiah 3:11).

Nivet was caught in Paris in September 1728, and executed a few months later—quite an unusual delay, probably because the police had to go to various cities in order to arrest his many accomplices. “He had been detained in La Conciergerie for the past nine months,” the famous lawyer Barbier writes in his journal. “He confessed everything, and gave many names. He had a 72 years old man arrested in the city of Cette, where he had retired for the past ten years.” This was his mentor, the one who had taught him to always kill his victims—Beauvoir. “Nivet thought he could save his head by talking, but he was wrong,” Barbier resumes. The capture of Nivet was probably the most remarkable thing since Cartouche’s. Indeed, Barbier notes that all the windows looking onto the Place de Grève, where Nivet was executed, were rented by curious for the occasion. “This affair will have more repercussions than the affair of Cartouche,” foretells Barbier.

Nivet’s name survived for a while, yet history proved Barbier wrong. In 2018, not much is left of him—unlike Cartouche, he went down in history, probably because he was no “noble bandit”; he had been too wicked for even the revolutionaries to portray him as a victim of the unfair system of the Ancien Régime. Nowadays, there’s nothing but a short sanctimonious brochure to remind us of his short and violent life—and if you want to read it on paper, then you may have to order your copy from a bookseller in India! God moves in mysterious ways, Mr. Nyon.