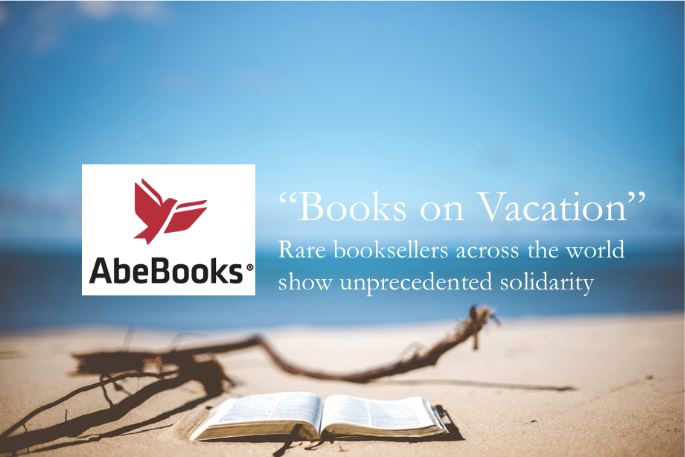 Not since David and Goliath... A ragtag army of independent, unrelated booksellers took on the largest retailer the world has ever known, Amazon, and won. Experts looking at the situation could not recall this ever happening before. Amazon moves for no one. Now there is an exception, and it comes from the field that gave the marketing behemoth its birth - bookselling.

It began in late October when AbeBooks, the antiquarian and used book selling subsidiary of Amazon, decided to cut off dealers from a few countries from selling on their platform. AbeBooks sent notices to dealers in the Czech Republic, Hungary, Russia, Poland, and South Korea that it would no longer accept their listings after November 30. It was but a short, terse notice, without explanation as to why or much feeling beyond a standard "we apologize for this inconvenience." Digging into the reasoning it turned out that a change in the service provider for payments was the cause. Evidently, a better deal must have been struck, but one that called for the jettisoning of sellers in certain countries.

The tiny spark that led to the fire proved to be a posting from a dealer in the Czech Republic on the ILAB (International League of Antiquarian Booksellers) site. Jan and Ondrej Schick of Antikvariat Valentinska of Prague posted a letter saying that they had listed books on ZVAB, then ABE after its takeover, for 15 years. They said they had worked hard to treat their customers well and had never received a major complaint from them or from ABE. Nevertheless, on October 18, they received a brief, impersonal letter stating, "Effective November 30, 2018, AbeBooks will no longer support sellers located in certain countries. Your business is located in one of the affected countries and your AbeBooks seller account will be closed on November 30, 2018. We apologize for this inconvenience."

The Czech booksellers described the decision as a shock, "especially since no reason was given." They went on to say they would have to dismiss at least five employees and had no idea where else to sell their 20,000 foreign books. They said this in effect would cut booksellers in these countries off from the world antiquarian book trade, and asked which countries would be next. They closed with a request for Amazon and AbeBooks to reconsider its decision.

One of the booksellers who took this message to heart was Simon Beattie of England. You couldn't ask for a better bookseller to start such a revolt. Beattie specializes in books that are unusual, sometimes daring and radical. He announced, in effect, he was going on strike. ABE has a feature that allows booksellers to put their books "on vacation" when they go away. They don't remove their books from the site. They just make their books invisible until they return. Beattie put his books on vacation.

He would not be the only one. Other booksellers put their books on vacation too. The number grew, until around 600 booksellers, with 3.5 million listings, put their books on vacation. Then, Britain's Antiquarian Booksellers' Association announced they would would not renew ABE's sponsorship of their London Book Fair in 2019, saying they could no longer consider the firm a "suitable fair sponsor" as a result of the "significant negative impact on the businesses of our friends and colleagues."

Amazon/ABE blinked. They realized they had made a terrible mistake and needed to reverse course. It may have been the first such substantial reversal by Amazon over a policy having a major effect on its suppliers.

On November 7, Sally Burdon, President of ILAB, spoke with Arkady Vitrouk, CEO of AbeBooks. Ms. Burdon said Mr. Vitrouk apologized for the decision and said that the dealers would not be dropped from ABE's listings on November 30. According to an email she sent, "Arkady told us that ABE are very well aware of the mistake they have made. He stated that it was a ‘bad decision’ and that they deeply regret the hurt and harm they have caused." She also noted that Vitrouk was up at 4:30 a.m. for the call, so obviously it was of great importance to him. Even more significantly, Burdon explained that booksellers in the affected countries could continue to post books as they do now until December 31, and that Vitrouk had pledged to find a solution that would enable them to continue selling books on AbeBooks indefinitely thereafter.

With that, the booksellers began ending their "vacations." An improbable victory against an immensely powerful company had been won, with many of the booksellers expressing surprise that it had turned out so well. Hopefully, Amazon/ABE will see this as a victory too. For almost two decades, the balance of power between ABE and its clients has shifted, booksellers, being unorganized, feeling increasingly weak and dependent on them. There has been resentment against Amazon, ABE and other such sites, such as eBay. That isn't healthy. Good relationships come from equals, not master and servant. If this helps renew a greater spirit of a shared vision, not a boss telling his underlings what to do, everyone will be better off, ABE included.