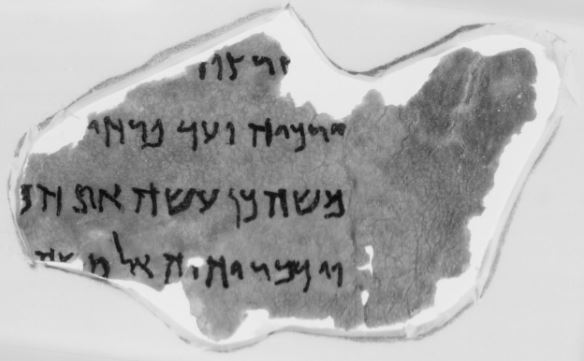 One of the supposed Dead Sea Scroll fragments.

The importance of authentication reared its head again in a discovery by the Museum of the Bible concerning fragments of the Dead Sea Scrolls in their collection. They aren't. Scientific research on elements such as ink and paper, as well as penmanship style, have revealed them to be of a much later date. They are forgeries.

About a decade ago, the Green family of Oklahoma, owners of the Hobby Lobby stores and devout evangelical Christians, began buying up all sorts of material related to the Bible. The Museum of the Bible was a dream and they had the money to fulfill it. They were not careful. Earlier this year, they had to return ancient tablets and such to Iraq that had been smuggled out of the country. They also paid a $3 million fine. It is internationally recognized by treaty that a country's laws regarding ancient artifacts are to be honored by all, the U. S. being one of the countries that enforces these laws. In purchasing these items, which involved highly suspect claims of provenance and means of shipping them to Oklahoma, it is fair to say the buyers were extremely careless if not deliberately looking the other way. Sometimes, the desire to put together something really special leads people to abandon common sense.

During their buying spree, the Greens purchased 16 supposed Dead Sea Scroll fragments which were contributed to the Museum of the Bible. Experts viewing the fragments raised questions concerning the authenticity. Considering the concerns, museum officials decided to have some of the fragments examined more thoroughly. The fragments were examined by Dr. Kipp Davis of Trinity Western University. He reported back, "My studies to date have managed to confirm upon a preponderance of different streams of evidence the high probability that at least seven fragments in the museum’s Dead Sea Scrolls collection are modern forgeries, but conclusions on the status of the remaining fragments are still forthcoming."

The next step was to send five fragments to Bundesanstalt für Materialforschung und-prüfung (BAM), a German firm capable of doing advance testing on them. BAM came back with the conclusion that the five fragments showed characteristics inconsistent with having ancient origin. The result is that the museum will no longer display these fragments, and now posts next to those still on display, whose authenticity is also in question, that there is doubt as to whether these are actually fragments of the Dead Sea Scrolls. Jeffrey Kloha, Chief Curator of the museum, said, "Though we had hoped the testing would render different results, this is an opportunity to educate the public on the importance of verifying the authenticity of rare biblical artifacts, the elaborate testing process undertaken and our commitment to transparency."

Forgery has long been a problem in the field of books and paper, but more sophisticated methods of creating them, coupled with higher prices paid for the most desirable of items, has made it an epidemic. More than ever, this is an era of buyer beware. Take that into account when purchasing a collectible item of great value. If you cannot conclusively authenticate it, walk away.