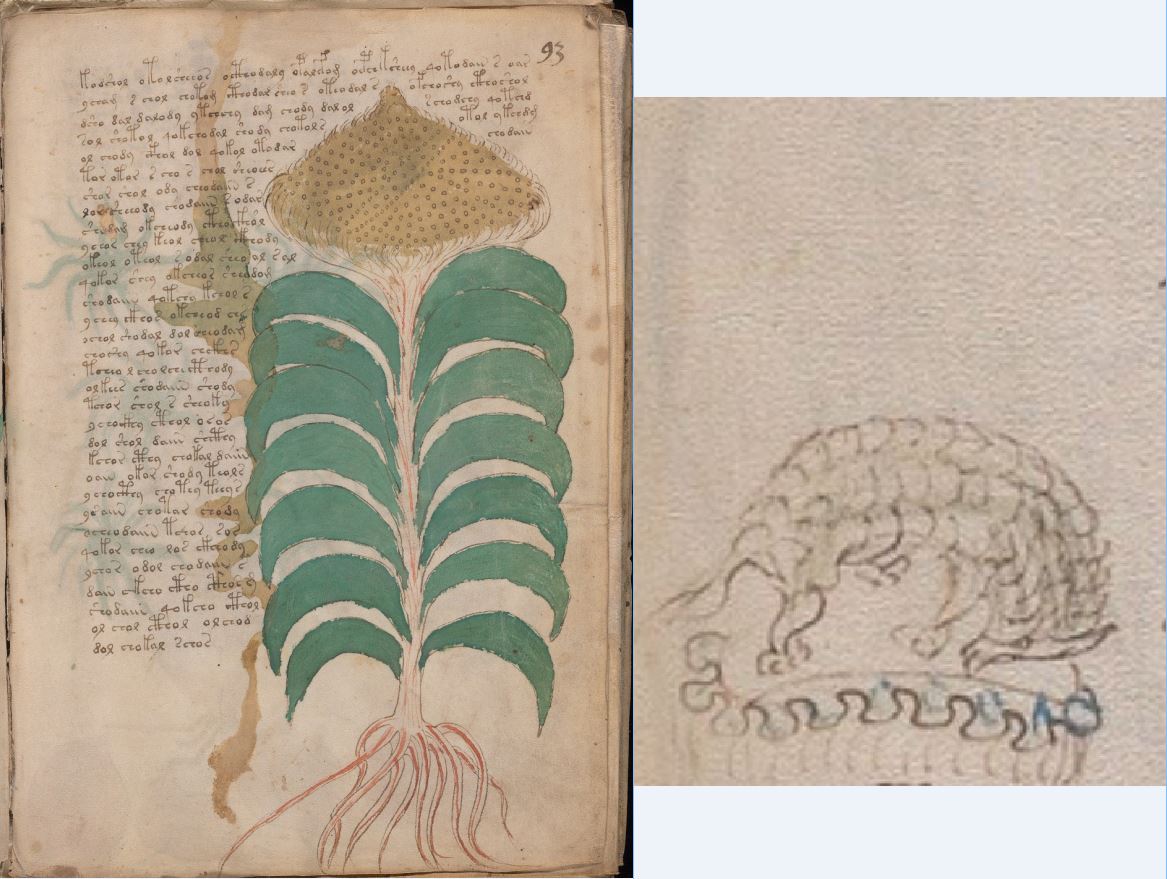 Two of the better likenesses are the sunflower and armadillo.

Two university professors believe they have cracked the code to the Voynich Manuscript (or Codex). If so, they will have succeeded in solving a riddle that has stumped all sorts of researchers for the past century. The Voynich Manuscript is a 240-page book, handwritten in a language that has been undecipherable to even the greatest of code-breakers. It is filled with illustrations of plants and animals, most of which don't particularly look like anything known to exist. The one thing that has been generally accepted is that it is very old, based on carbon dating of its vellum pages. That dated it to 1403-1438. Professors Arthur O. Tucker and Jules Janick agree that it is very old, but not quite that old. They believe it is from the 16th century. As we will see, the earlier date put constraints on identification that Professors Tucker and Janick have broken through.

The first known appearance of the manuscript comes from around 1600 when it was purchased by Holy Roman Emperor Rudolph II, who may have believed it was the work of Roger Bacon. In 1666, it was given to Jesuit scholar Athanasius Kircher to decipher. It then disappears from sight until purchased from a Jesuit college by Polish bookseller Wilfred Voynich (hence its name) in 1912. Bookseller H. P. Kraus purchased it from the estate of Voynich's widow and gave it to Yale University's Beinecke Library in 1969.

Most attempts to crack the code have focused on the language. It is an unknown language with unknown letters. What can be said is there is a pattern to the words, repetition often found. Some have thought it resembled other languages. Still, no one has been able to figure it out sufficiently to translate it. Those who thought it was a hoax figured it's just a nonsense language. However, those who so believe diminished once its age was more clearly established.

Others have looked at the illustrations, and these are a bit more helpful. Researchers have described its sections as herbals, pharmaceuticals, astrology/astronomy, and biology. Most illustrations are of plants and flowers. There are zodiac like illustrations adorned with many naked women. The biological part also consists of lots of nude women, but in pools of water. Tucker and Janick have focused on the many illustrations of plants, and to a lesser degree of animals. That makes sense as Tucker is an emeritus herbarium director at Delaware State University, Janick distinguished professor of horticulture at Purdue University. However, there is a problem. The plants have also been unidentifiable, often fantastic looking drawings of plants not known to exist.

Certainly, these plants were unknown to Europeans. The generally accepted dating of the manuscript of the early 15th century mostly eliminated the work as representing any place other than Europe, and certainly not America. However, if the date is moved back a century, post-Columbus, that opens the New World to consideration. Not that New World plants were never considered. Not long ago, a theory was proposed that the book was created by a Christian sect driven from their homeland early in the 15th century. The theory says they took off for parts unknown, ending up in Venezuela many years before Columbus. That seems a bit of a stretch, but explained some similarities to plant life in the New World.

However, if you move the date back a century or more, a New World setting becomes plausible. That is not to say these plants are easily identifiable as American either. It takes greater knowledge of New World plants, or as the authors have concluded, ones specifically from Mexico, to see the connection. They believe they have identified 59 of the 362 plant drawings as being of plants indigenous to Mexico. Much of the problem in making the connection, they think, has to do with limitations of artistic skills, the absence of many colors of ink to use, and fading over the centuries of those colors that were employed.

Along with the plants, Tucker and Janick have identified 12 animals native to the New World. Those include the armadillo, alligator gar, horned lizard, jaguarondi, and coatimundi.

Not only do they believe they have identified where the Voynich manuscript was created (Mexico), they have even named its writer and illustrator. How is that for confidence? The writers have named the author to be Gaspar de Torres, son of Spanish parents and a lawyer who defended the rights of local Indians, the illustrator Juan Gerson, a native artist. This is based on a name and initials said to appear on the first botanical illustration.

The explanation for the early 15th century carbon dating of the vellum is that it was washed and reused, something often done in the day when expensive vellum had to be used, rather than cheap paper. If their 16th century dating is right, it also explains images of a castle and harbor, and other things European in appearance. The Spanish-descended Torres likely would have had European books with him that Gerson could have used for illustrations. As for the strange, undeciphered language, the authors believe that it is a synthetic language, based on Nahuatl and Spanish, or perhaps based on an Aztec tongue. It remains untranslated.

Have the two professors cracked the code? Maybe. Some of these plants bear significant resemblances to known Mexican plants. In other cases, perhaps they are seeing greater resemblances than others may see. And, most of the plants remain unidentified, which is surprising if they all represent native species. Then again, the drawings are a bit fanciful and the quality of artistic reproduction something less than outstanding. The same may be said of the animals, though there are features of Mexican animals that could be present in the amateurish drawings. Maybe.

Professors Tucker and Janick have released their findings in a recently published book entitled Unraveling the Voynich Codex.