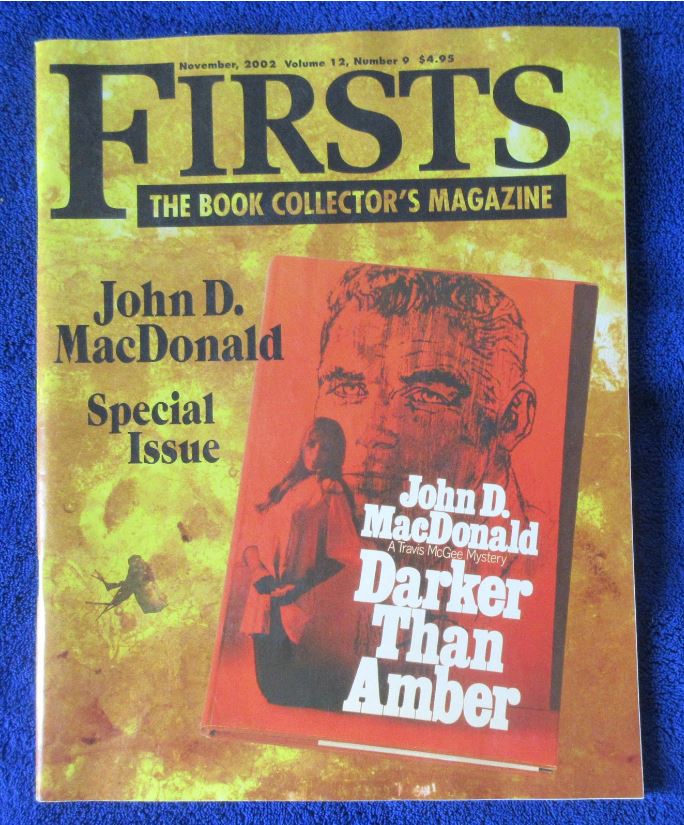 You'd think that 20 years into the digital age there would be no place for a printed magazine devoted mostly to bibliography of books, mostly from the late 19th century to the present day, but you'd be wrong.

FIRSTS - the Book Collector's Magazine, established in 1991 by Robin and Kathryn Smiley, is still going strong and still a good place to turn as a convenient reference for those collecting specific authors or genres. The Tuscon, AZ based publication comes out six times a year; almost without exception each issue is a keeper.

Now in their 28th year the magazine has a paid circulation of about 1,500 subscribers and a well honed format which typically includes one or two longish biographical articles on a writer of note or a genre such as mysteries, science fiction, or children's books, followed by a checklist of important titles. The checklist gives first and important editions, points, notes and related values. All of it is well illustrated with photos of the books discussed. From time to time the magazine looks back at past featured authors and their works and updates the estimated market values. It also has a regular column called “Points” that answers particular questions sent in by readers. "Books into Film" has been a standing feature since the magazine’s inception. It typically profiles a well known book and gives details of how it was made into a motion picture.

Editor Kathryn Smiley recently spoke with Rare Book Hub about the evolution and staying power of their publication. She said that she and her husband Robin (or the "Bearded One" as she called him) were originally magazine print brokers based in LA when a client mentioned there would be a book fair in the city. The couple attended what turned out to be an ABAA event. They were hooked.

"It opened a whole new world,” she said, “we went from buyers to collectors, and we immediately started to look for education. The need to know more evolved into FIRSTS. It started as a monthly, tapered off a little to ten times a year and in 2014 reduced its schedule to six issues a year.

Authors and topics that have proved popular with FIRST readers include Ian Fleming, Charles Dickens, Mark Twain, as well as Western Americana, and Naval Fiction. But the list of popular bibliography they have published is wide and deep and includes practically every writer you’ve ever heard of and some you haven’t.

She also noted that they typically print an overrun of several hundred so that the back issues are still in print. Back issues from 1991-to 1995 are $12 per copy while more recent ones are $10 apiece. An annual subscription is $40/year.

While the biographical and topical articles are well done, it's the checklists that give the magazine its unique appeal. "Robin gets most credit in that department," she said, "he’s a born list maker, and an enthusiastic one at that. When he gets interested he dives in headlong."

"It's hard to write about books you haven't actually handled and read," Smiley said. The couple buy as many of the books they write about as they can, "We keep the ones we want and sell the others."

When they lived in California we would "take all the books we didn’t want to keep to an annual sale, that took care of a lot. But since we moved to Arizona, 24 years ago, there's not as much interest hereabout, and as a result, we're bursting at the seams with books."

They write about, "whatever catches our fancy, but really it's not that random… We like to venture outside of the standard Fitzgerald, Hemingway, Faulkner, Steinbeck territory. If we just stuck to those kind of books we'd be bored in no time." Publishing FIRSTS, she said, has been "a wonderful voyage of discovery. "

Among the upcoming topics are articles/checklists about biographer Richard Holmes, Ben Franklin, and Children's Books to name a few. While the pair seems to write most of the issues themselves, there are also a good many articles from outside contributors, and the masthead lists a distinguished group of booksellers as an advisory board, many of whom are also advertisers. Smiley said they research values “by looking at what's offered by people we know or we know of.”

Their advice to collectors is not to look at books as an investment. “Collect what you love; if it appreciates, swell, if it doesn’t, so be it. Their own personal taste runs to opera. "We have a huge collection in all formats."

Like the Smileys, many of their collector friends are getting older. "We get about one call a week about downsizing," she said. A letter of advice from FIRSTS on the subject of selling your collection is at the end of this article.

"I don’t have a sense of where the market's going,” she said, “and I’m not concerned.” She's sick of "urban angst", she doesn't do podcasts or text, hates eBooks, admits that the internet has caused major changes in the world of books, but for herself, “I don’t want to spend anymore time than necessary looking at a screen.” On making a living she said, "Money is nice but it's not my primary focus.”

"The world changes,” she said, “but I can predict there will always be people who love books, not just as literature but as physical objects….We love what we do and we'll just keep on keeping on."

A few years ago we announced plans for a series of articles about how to sell books you no longer want to keep in your collection. We cancelled those plans when it became apparent that with the economy in such disarray and things in general changing at a rapid rate, any specific advice we could give was likely to be outdated before we could publish it.

But since the inquiries keep coming in, we’ve put together this list of things to keep in mind about selling your books. We cannot act as appraisers or agents in this process, but we hope this information will be of help.

Ask yourself these questions, and answer them honestly: Do I know today’s market value for the books I want to sell (not what you paid for them years ago or what you think or wish they’re worth), and how much under that am I willing to accept for any or all of them? How much work do I want to do, and how much personal contact do I want to have with potential buyers?

Theoretically, you’ll do the most work and receive the highest prices if you sell books to another collector. It will require research, compiling inventory lists, making contact through advertising or an Internet listing service (which itself will require registering with that service, learning how to use it and paying its fees) and packing and shipping small lots. It’s highly unlikely you’ll sell all your books to one buyer, so this will require a lot of time and effort and contact with many individuals.

You’ll do the least work and receive the lowest price if you sell the lot to a bookseller. As with any other enterprise, booksellers must be able to make a profit on the books they buy—it’s how they make a living. They cannot pay you full market value for your books if they are to stay in business.

They also cannot afford to tie up large amounts of money in books for which they have no customers, so they are much more likely to buy books they know they can sell right away.

In addition, the value of many books has declined. This is simply a function of the supply-and-demand aspect of the marketplace: it happens with any collectible or commodity. If you decide to go this route, our best advice right now is that you make a descriptive list of your best books and mail or email it, along with a letter of inquiry, to a wide range of booksellers. Start with our advertisers: they are all reputable professionals, most of whom we know personally.

Auction houses are another possibility for selling your books. Just make sure you’re fully informed and completely clear about their fees and terms of sale and payment before signing on.