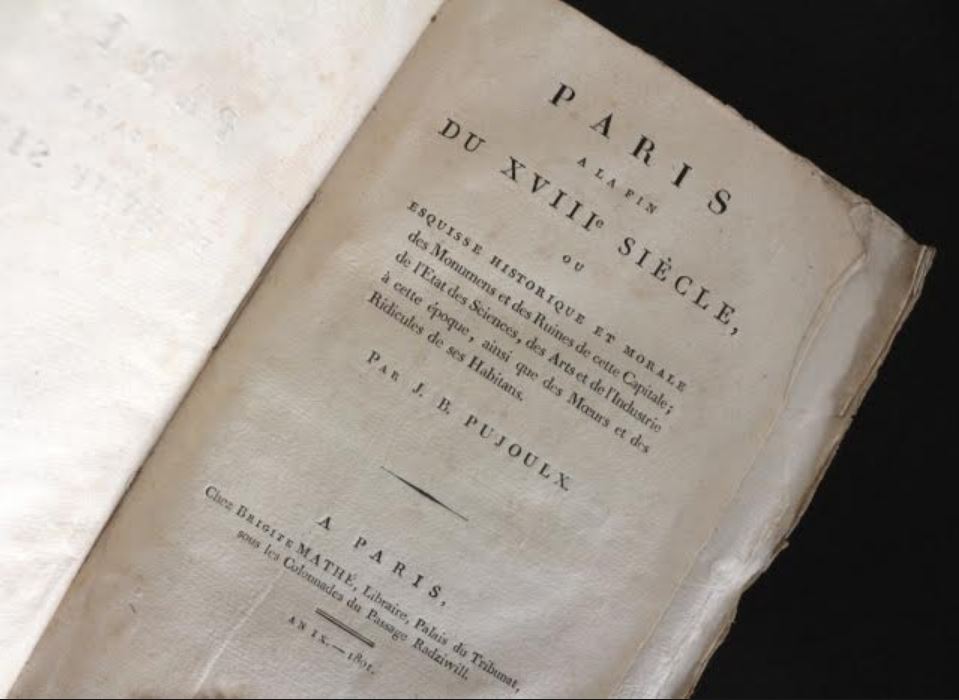 Before Mercier’s LeTableau de Paris (Neuchatel, 1780), books about Paris were mostly catalogues of monuments and compilations of historical anecdotes or satirical writings. Mercier, focusing on the details of everyday life, penetrated the heart of Man, and drew a moving portrait of his contemporaries. He inspired many, including Jean-Baptiste Pujoulx (1762-1821), who published Paris à la Fin du XVIIIe Siècle (Paris), some twenty years later. In between broke the French Révolution (1789). Thus, Pujoulx’s book appears to be an update to Mercier’s.

This in-8° volume was apparently printed for the first time in 1800—Year IX of the Republican, or revolutionary calendar established in 1792, and abandoned in 1806. In fact, although mentioned in Feller’s Dictionary... (Lyon, 1823), this first edition is nowhere to be found on the Internet, unlike the so-called second one, published in 1801, chez Brigite Mathé, Libraire, Palais du Tribunat, sous les colonnades du Passage Radziwill—An IX, 1801. Regarding the latter, the French expert Benoît Forgeot wrote in a catalogue of a Pierre Bergé’s sale in 2011: “Second edition, published the same year than the first one.” Yet, could this 1801 edition be the very first one? A second edition did come out in 1801, indeed—but at La Librairie Economique...(Paris), Year IX—1801. The title page of this edition also bears the mention “SECOND EDITION”. Then the forewords state: “There are two ways the author of a book can judge of its success; the opinions of the reviewers and the promptness of the sales. This edition is the proof that the first one sold very quickly.” Could it refer to a first Libraire Economique’s edition? This was nowhere to be found either. The confusion could come from the Republican calendar—according to it, Year IX went from September 1800 to September 1801. To make it even more complicated, in La France Littéraire (Paris, 1835), J.M Quérard lists two editions: 1) Paris, Brig(ite). Mathé, 1800, in-8 of 390 pages, 3 fr. 50c. 2) Seconde edition. Paris, Librairie Economique, 1801. Yet, all the Brigite Mathé’s copies I have come across (Year IX—1801) feature 388 pages only! Was Quérard counting the half-title page? Or did he make a mistake?

The “Year IX—1801” edition was published by Brigite Mathé. You won’t find much about her either, until you correct the spelling of her name in Mathey. The Bibliothèque Nationale de France (BNF) states that she became a librarian in 1791, aged 22, and that she also had a “reading salon.” “The bookshop and the salon,” the BNF states, “were funded by the printer-librarian and journalist Antoine-Joseph Gorsas (1751-1793)—Mrs. Mathey used to be his servant.” They were actually lovers—Gorsas was a married man—, and when the revolutionary government put a price on Gorsas’ head following his implication in politics, he naturally sought refuge with her. “Not only was he careless enough to go to a mistress of his,” the Biographie Nouvelle des Contemporains... (Paris, 1822) reads, “but he also showed up in the middle of the assistance of her salon.” Consequently, he was arrested and “guillotiné” (beheaded) on October 7, 1793. Brigite Mathey later worked with Gorsas’ widow—until they fell out with each other—, and then she directed the Gazette de Paris (around 1797) and took care of the subscriptions of La Toilette. She retired in August 1824, selling her licence to Augustin Vattebault.

The period following the Révolution was a bloody and confused one. Paris became the theatre of massacres, political revolutions, and Mercier’s portraits were now vague souvenirs from another world—and his Nouveau Paris/New Paris (Brunswik, 1800) was not as good as the “old” one. All these dramatic events made Pujoulx a prudent man. In his preface, he makes sure that his observations are “of a man of letters, who remained sort of independent during this long period of time, when all excesses, errors and crimes degraded humanity.” Consequently, his book shows that, beyond politics, and as Napoléon Bonaparte was reigning, Paris was still Paris.

The drawers of water, described by Mercier 20 years earlier were now enjoying a far better condition: “Sliding on the pavement with their hooves, they used to break their necks; and had to walk 8 miles a day to earn 30 pieces. Nowadays, they have their small horse-drawn carts, upon which they put their barrel—the barrel is nicely painted, the horse well harnessed (...). Thus, their job is less difficult and more lucrative.” The four or five ice cream vendors who used to control the lemonade business were now replaced by dozens of Italians, and the coaches, described by Mercier as filthy—some even used them as a last resort to relieve their stomachs—, were now so clean that they stood the comparison with the best private coaches; except, Pujoulx notes, for the insolence of their drivers—some things never change, and taxi drivers in Paris are still rude today.

Great writers such as Voltaire or Rousseau had a crucial influence on society, especially during the Révolution—yet, in the street, they were far less popular than secondary, and sometimes anonymous authors, whose works were even rented by the hour on the sidewalk—Mercier says that some of these books had to be split in several parts in order to satisfy the demand! The dramatic events of 1789 gave birth to a multitude of writings—but Pujoulx wasn’t impressed: “Have a look at the thousands of brochures that have been published over the past twelve years, if you dare,” he says. “What do you learn? Nothing, or almost.” People in 1801 were reading a lot, especially novels “full of haunted castles, dark forests, ugly caves and dreadful tunnels.” He means Gothic novels—books of little value, according to him, in both senses of the word. “A penny only! Two pennies!, is what you can hear the most on the boulevard Montmartre and the Quai du Louvre; and what does the vendor sell, according to you? Small cakes? No, books!” The police of books was no more, yet nobody was pouncing on Voltaire’s fiery writings, except for the vendors—“for the past six months, (...) all the vendors of my community have been wrapping their merchandise in leaves taken from the Letters of Voltaire, nice fonts and paper.” If you think that the 2008 crisis was a blow to book business, then think again: “Should the collection of the Duke de la Vallière, that was sold for almost a million Francs 15 years or so ago, be sold today, it wouldn’t bring more than 50,000 Francs; and most of it would end up on the “one penny” pile.” Pujoulx adds: “Let’s be honest, a few books like dictionaries, treatises of geography, or travel books are still selling—at a very low price.”

One of the most interesting parts of Pujoulx’ book regards education, which he calls “the base of happiness”—a notion that is still at the heart of French society today. Rousseau did a lot for children before 1789, especially with his book Emile ou De L’Education (La Haye, 1762); but his method, Pujloux thought, was too demanding, unrealistic, and discouraged many people of good will. He had his own views. First, he wanted to free young children, who were tightly wrapped in nappies. “We all agree that this horrible habit of suffocating our children (...) is the cause of all their deformities and diseases, because of the ill-circulation of blood or the compression of the lungs that it implies.” It is true that a lot of engravings from the 18th century show children wrapped like eggrolls. “Most of these children cry and shout when being wrapped; those who do not are probably even more miserable, since they are used to a suffering that they endure with resignation; most of them cry and throw up during this daily torture.” Pujoulx calls it “physical slavery”, and then he goes on: “Here is what I advocate: you bind your children, set them free! You treat them like exotic plants, treat them like acclimated beings; you beat them, caress them instead; you flatter their pride, you’d better teach them their mutual dependency, and teach them love for their likes.” Update 20.18?

Pujoulx’s book is very entertaining and full of interesting facts about Paris and his contemporaries. Yet, it doesn’t stand the final comparison, and gently joins the dozens of other books on the “not-as-good-as-Mercier’s Tableau de Paris” pile. Paris will be Paris... and Mercier will be Mercier.