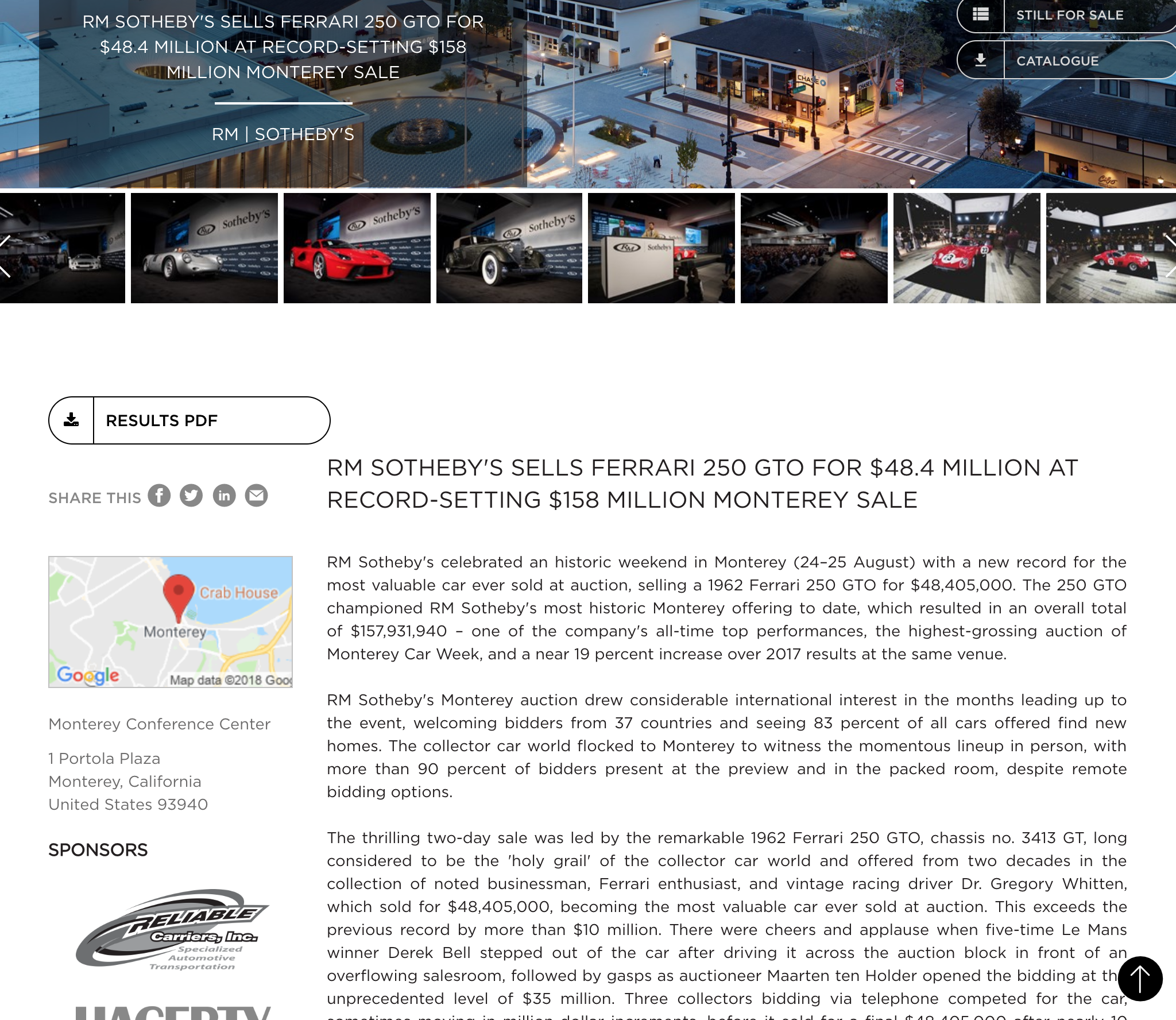 Many auctions, millions of dollars - for old and rare cars impeccably maintained or restored

On a recent Saturday, flipping through the now hundreds of TV channels looking for something worth watching I chanced across the future of important rare and collectible paper auctions.  There, at noon on the NBC affiliate covering the San Francisco Bay Area was an auction, yes an auction.

It was the Saturday Mecum Car Auction at Pebble Beach held during the antique car get-together where astounding classic cars are sold for even more astounding prices.  Pride of place during the weekend show went to a car that wasn’t made until I was sixteen years old, a 1962 Ferrari GTO 250 that brought $48.4 million.  More to my taste, if not my pocketbook, was a 1935 Duesenberg SSJ that changed hands for $22 million.  Personally, I preferred the 1934 Packard Twelve Individual Custom Convertible Victoria that sold for $3,745,000.  That would have been an excellent car for dating in my teens.

What’s interesting about these sales is that if NBC can show a car auction it’s also possible for rare books to be on mainline television.  So, what would it take?

For starters it’s all about money, both the highest values and the number of lots showcased during say an hour.  The cars I watched each spent about five minutes in the pits.  For rare books, given that the values will be lower, the flow would need to be closer to one minute and even then, the material would need to be exalted, probably a ten-million-dollar minimum.

So, are there enough very valuable items that could be sold in that hour?   Yes but inevitably it will take not only exalted but also very famous material and that means we may not see a rare book auction on main line television until a Gutenberg Bible is offered.  The next copy, assuming it is sumptuous and very original, should bring fifty million dollars.

Such a sale would be very good both for the trade and for book collecting.  With all the collecting and gaming opportunities that abound book collecting can look like Grandpa’s thing.  But if rare books, maps, manuscripts and ephemera can break into the space where the current and future generations of collectors are relaxed and open to new perspectives collectible paper will make a very good case.

Those of us of a certain age know that such material is exceptionally satisfying to study and collect.  Our challenge has long been attracting the attention of future collectors.

Therefore, if you have a Gutenberg, and understand it is different from a Duesenberg, think about selling it and suggesting the auction house you select use an hour of mainline television to showcase the experience to the emerging next generation of collectors.

It will make a difference.