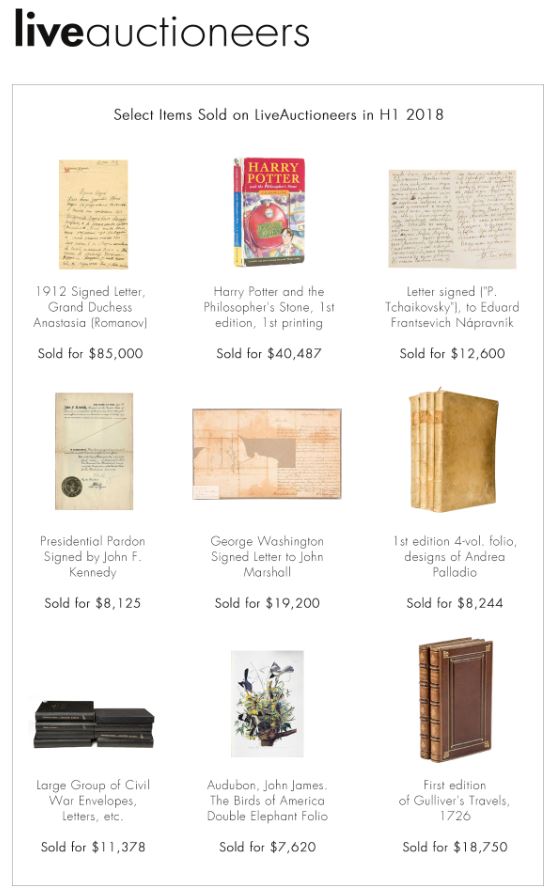 Some of the books and related paper sold this year by LiveAuctioneers.

LiveAuctioneers reported record sales and substantial growth during the first half of 2018. LiveAuctioneers conducts online bidding for almost 5,000 auction houses, galleries, and dealers in the field of art, antiques and collectibles. Among the items regularly appearing in their sales are books and related collectible paper, including manuscripts, posters, photographs and prints. What we are seeing in the auction field is reminiscent of what we saw in fixed-price sales two decades ago, when aggregators such as AbeBooks, Amazon, Alibris and Biblio quickly became the major marketplace for antiquarian and collectible books.

LiveAuctioneers, along with others such as Invaluable and BidSquare, have staked out a position in the auction field similar to the book aggregators in the late 1990s. The numbers achieved by LiveAuctioneers are impressive. According to a news release issued by the firm a few days ago, "The first half of the year comparisons on a year-over-year basis include:

• An industry-leading average sell-through rate of 24.7%.

LiveAuctioneers also reported delivering winning bids on over 300,000 items in the first half of 2018, and processing bids (both winning bids and underbids) in the amount of billions of dollars.

Naturally, books are not the largest part of these billions of dollars in bids. We should only be so lucky. They sold works of art that ran into six figures. Still, books and paper sold on their platform went into five figures. As the accompanying illustration shows, a signed letter from Grand Duchess Anastasia (is she still alive?) sold for $85,000. One we all could have bought a few years ago if we were more prescient, a first edition, first printing of Harry Potter and the Philosopher's Stone, took in over $40,000. Other double-digit items included a letter from George Washington to Chief Justice John Marshall, a letter from Tchaikovsky, and a first edition of Gulliver's Travels.

LiveAuctioneers also reported that they will be using their past success to grow services to help their clients better market and sell their items. One recent addition was adding the ability to accept payment in cryptocurrency, something it is unlikely most houses, particularly smaller ones, are equipped to do by themselves.

LiveAuctioneers success is the latest step in markets constantly reinventing themselves. We saw local bookstores replaced by chains, which in turn were replaced by large bookstores that sold coffee and food and provided live entertainment, in turn replaced with internet listing sites that aggregated sellers from around the world. Meanwhile, Amazon learned how to sell books and everything else in huge quantities online. The antiquarian field was somewhat shielded from change compared to those who sold new books, but not all that much. Then came the equalizing, everyone-can-be-an-auctioneer provided by eBay for primarily lower priced items. Now we see LiveAuctioneers aggregated 5,000 auction sellers. Some may see it as less personal than the old ways of selling, and perhaps it is, but in a world where people no longer have much free time available, efficiency and cost matter. The customer is always right, so of course, they are once again making the right choices.