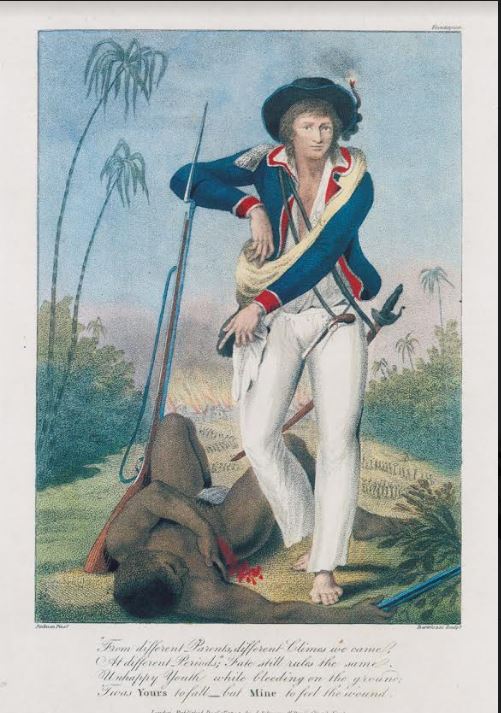 In 1772, John Gabriel Stedman, a young and “romantic” English soldier, embarked for the New World to fight against the “revolted Negroes” of Surinam. The narrative of this extraordinary travel became a bestseller, and is still a classic today. The text—softened at the time—is at the crossroads of two colliding worlds, and the plates are as strong as National Geographic’s photographs! It was soon translated into French, and published by François Buisson, “year seven of the Republic”—1799.

Stedman’s narrative is no official relation, like Cook’s or Anson’s, but the testimony of an “ordinary witness.” What he goes through is what “you and me” could have experienced at the time. Yet Stedman wasn’t exactly an “ordinary” soldier. As Quérard put it in La France Littéraire (Paris, 1838), he “wrote his relation as a true philosopher, meaning as a sensitive and learnt man.” He was also a talented drawer. The plates that illustrate his book are breathtaking. First, they are beautifully engraved, for several of them, by William Blake himself. Then, they represent real people in real situations. A female slave is whipped while attached to a tree, and Stedman appears in the background, as he vainly tried to rescue her—his intervention only infuriated the white master, who had his slave punished even harder. Then, meet Joanna, a beautiful half-naked woman! She is the slave Stedman fell in love with—they had a son together. Then comes the portrait of a “Surinam planter”, arrogantly smoking his pipe while being served by one of his female slaves. It sends a shiver down our spine because of some silent and dirty sexual tension. Suddenly, you feel like you’re watching Tarantino’s Django Unchained.

There is also a Maroon, or “revolted Negro”, caught in a dramatic position after hearing a threatening noise—the representations of those runaway slaves are very rare. Maybe even more exciting is the unique portrait of one of those former Maroons, who turned against their own in order to gain their freedom from the Europeans. At one point, Stedman reports a short dialogue between one “free Negro” and some ambushed Maroons—an incredible discussion! This is what makes Stedman’s narrative unique: it takes you where no one else does. An engraving, representing the soldiers crossing a swamp with their rifles above their heads so they won’t wet the powder of their rifles, is also an amazing piece of art. Worthy of the best Hollywood movie posters in its composition, it features Stedman himself and his tyrannical superior, Colonel Fourgeoud. Last but not least is the self-portrait of Stedman, proudly standing above a bleeding Maroon. He casually leans on his deadly rifle, looking straight at the “camera”. These engravings are so modern—they are not less powerful than the nicest National Geographic’s pictures, indeed.

The English edition came as 2 in-folio volumes with the illustrations bound with the text. François Buisson published it in French as a set of 3 in-8° text volumes and an in-folio atlas of 44 plates. At the time, publishers kept their printing plates, and Buisson had to ask a French engraver to reproduce the illustrations from the originals. He thus called on Pierre Alexandre Tardieu—here credited as “Tardieu l’aîné”. From a prestigious linage of engravers, Tardieu worked a few times with Buisson, including for the maps of Voyage à l’intérieur de la Chine..., by Lord Macartney (Buisson, 1798). “We recommend this distinguished artist to all lovers of beautiful maps,” the publisher wrote in the margin of this title. The result is indeed also wonderful, and stands the comparison with Blake’s originals.

Stedman was a fiery young man led by devouring passion. He rapidly made an enemy out of his superior, Col. Fourgeoud, who kept on sending him to unhealthy parts of the colony, endangering his life. Stedman was also outraged at the way the European planters treated their slaves, although he considered slavery as necessary—didn’t Europe need coffee, sugar and cotton? “The quantum of sugar, &c, will be had, and must be provided by negroes, natives of Africa, who alone are born to endure labour under a vertical sun.” Furthermore, they were, he claims, unable to organize themselves: “The national character of these people(...), where they are as free to act by their own will and disposition as in Africa, is perfectly savage; the twenty thousand Ouca and Seramica free negroes have lived separated, and under no control of Europeans, for a number of years, and yet I have never seen any marks of civilization, order, or government among them, but, on the contrary, many examples of ungovernable passion, debauchery and indolence.” When “ardently” kissed by a black slave one day, Stedman is shocked: “Heartily provoked at this unexpected and (from one of her colour) unwelcomed salutation, I disentangled myself from her embraces, and angrily flung into my apartment.” Yet, he wasn’t always that touchy, and he had many sexual intercourses with slaves, as noted not in his book but in his manuscript diary. The University of Minnesota confirmed the authenticity of this document in 1978 (umedia.lib.umn.edu/node/698225). This is a gorgeous piece of history that comes along with some original paintings by Stedman. It was used for the 1988 complete critical edition of Stedman’s narrative (Johns Hopkins University Press, 1988). Most of Stedman’s sexual “experiences” were expunged from the book, but that’s how he first met his beloved Joanna. As a matter of fact, his relationship with her is seen today by many as a form of colonial sexual exploitation—yet, he truly loved her.

A “good for nothing” version

Back home, it took Stedman ten years to put his book together. His manuscript ended up in the hands of Joseph Johnson, the famous radical intellectual and printer, who ordered William Thompson to rewrite it completely. Stedman was horrified. “He used the following words for it: “marred”, “spoilt”, “good for nothing” and “full of lies and nonsense,” Win Hoogbergen states (Hoogbergen Wim. J. G. Stedman, Narrative of a Five Year's Expedition against the Revolted Negroes of Suriname. In: L'Homme, 1989, tome 29 n°111-112. Littérature et anthropologie. pp. 265-267.) The already 2,000 printed copies were therefore destroyed—“That must have been the complete edition,” Hoogbergen resumes, “as there is no version of Thompson’s version known to be left.” Stedman eventually agreed on a compromised version with Johnson, but was still unhappy about the 1796 edition: the descriptions of ill-treatment towards slaves were softened—they are yet still dreadful! Hoogbergen tells us why: “In 1791, the French Revolution had caused the slave revolt of Saint Domingue (Haiti), a revolt in which English (...) had lost 40 000 of their soldiers. (...) the English sympathy for the Blacks and the slaves had considerably diminished.” Notwithstanding, the 1796 edition remains a must-read book—and the last few pages will haunt you for a long time! Stedman’s text is mostly a day-to-day report of his five years’ stay in Surinam. We follow step by step his tribulations, we curse Col. Fourgeoud in unison, we rejoice at his good fortune and almost shed a tear when he is forced to leave his wife and son behind: “I exchanged a ringlet of their hair and fondly pressed them both to my bosom:—the power of speech also forsook me(...)—Joanna now shut her beautiful eyes—her lips turned the pale colour of death—she bowed her head, and motionless sunk into the arms of her adopted mother.” Stedman goes through a lot of stress, pains and fears, that’s true. Yet he is madly in love, full of life and hope; he is a fighting young man—until the last pages.

Suddenly, his words are those of an old man, tired and lonely. Reflecting upon what God took back from him, our fiery narrator turns dark and morbid. Each new line is like another nail driven into his coffin. First, we learn that the wicked Col. Fourgeoud died from disease, like a frail creature—and this is like Pliny the Younger losing Regulus, his “favourite enemy.” Then, out of the blue come the terrible words: “But she is no more!—Reader!—the virtuous Joanna, who so often saved my life, is no more!!” She was buried in Surinam, under “the grove of orange trees where she had lived.” In this tropical fairy tale, all isn’t so well that ends even worse... Fortunately, his son John was sent to England, where he took care of him. Joanna’s boy joined the army, and started a promising career, when suddenly—“But, Oh!—he also is no more, having since perished at sea off the island of Jamaica.” A very moving elegy follows—absent from the French edition—, dedicated to “My manly boy—my John—my sailor...” Then Stedman bids farewell to his readers with two of Churchill’s verses—also expunged from the French edition, probably because the poet was ill-known here—, just as if descending into his grave: “Let one poor sprig of bays around my head / Bloom while I live; and point me out when dead.” This abrupt ending, closing such a lively and detailed narrative, drives a knife through the reader’s heart—and when the last leaf of his narrative is turned, a long silence follows.

François Buisson added a Tableau de la colonie française de Cayenne to the French edition, as well as a series of letters written by C. Lescallier, Former Manager of Guyana, which are quite interesting—especially as far as slavery is concerned. Yet, nothing can drive us away from Stedman’s narrative—and nothing has for the past 200 years! We keep on reading it, mesmerised by these gorgeous engravings. John Gabriel Stedman currently rests in peace, indeed—however, his book is the sprig of bay that still points him out.