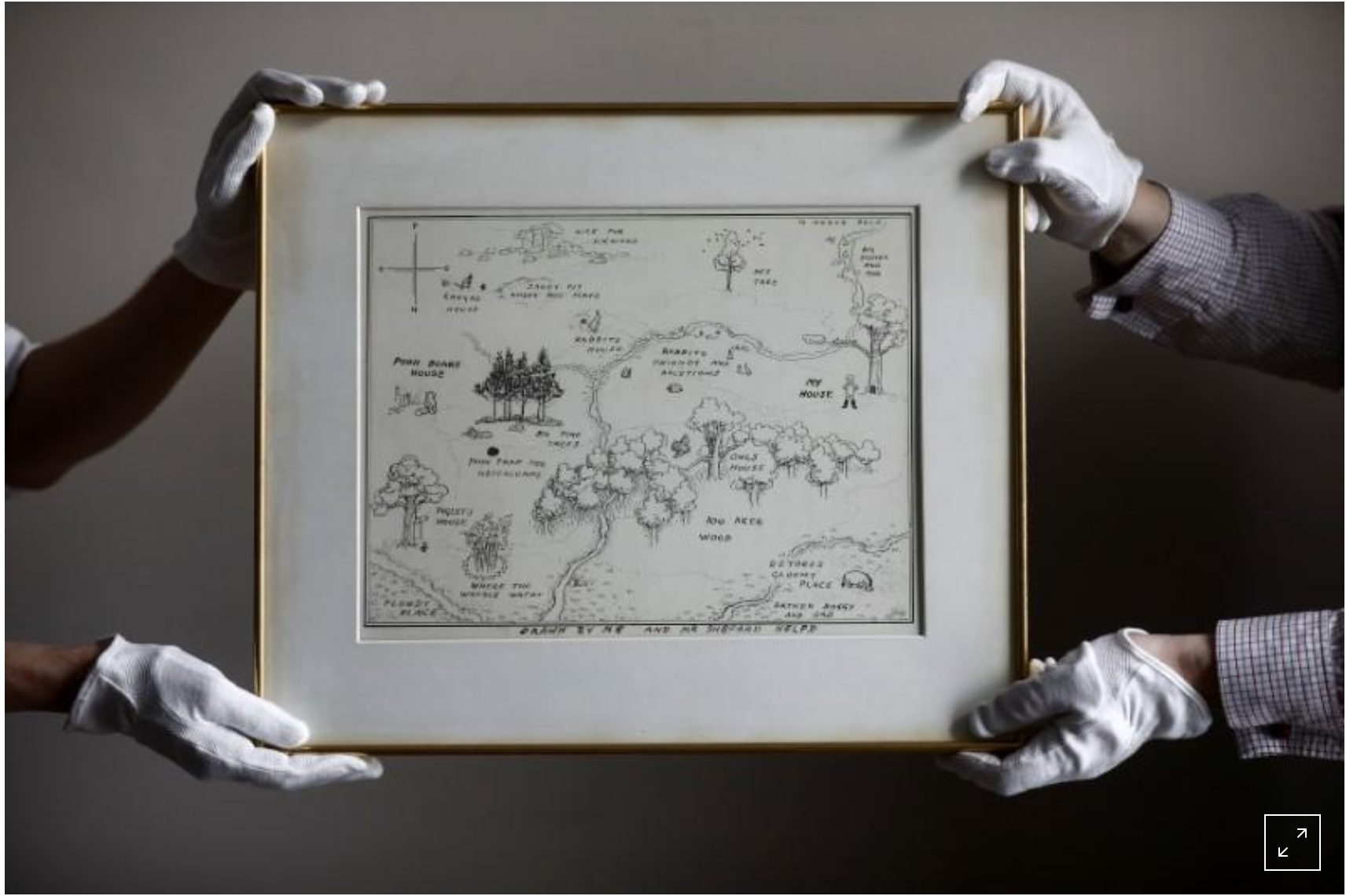 PROBABLY THE MOST FAMOUS MAP IN ENGLISH LANGUAGETHIS ILLUSTRATION HAS BEEN IN PRIVATE COLLECTION FOR ALMOST FIVE DECADES.  Once Milnme had created the literary landscape of the hundred acre wood and surrounding features, it was Shepard ho firmly established the visual setting.  With typical Shepard humour the map is supposed to be the work of Christopher Robin (“Drawn by me and Mr. Shepard helpd”) and includes a number of Christopher Robin’s own spellings (“pikniks”, “raletions” and “rox”.)  The map was reproduced on the endpapers of Winnie-the Pooh and, at least for Shepard, established a defi9nite visual style.  In 1931 when Shepard worked on The Wind in the Willows his first innovation was to introduce a map of the locality on the endpapers.  Both maps, of course, pre-date those in Tolkien’s The Hobbit.  Just as Shepard’s map is the means of entry to the book, it is also the first animated sequence in the Disney film (Winnie-the-Pooh and the Honey Tree, 1966).  Shepard produced at least two preliminary drawings for the map (one in the collection of the V & A Museum and an earlier sketch sold in these rooms, 17 December 2008).  This, the original as used by the publishers, was sold in these rooms, 17 December 2008).  This, the original as used by the publishers, was sold by Shepard in his exhibition at The Sporting Gallery, 26 November – 21 December 1926.  It was given the title, in the exhibition catalogue, as simply “Map of Pooh’s Country”.  Below the mount Shepard has added the caption “Winnie-the-Pooh.  Map for end papers”.  The reverse of the board also notes “Map for End Papers”.

Looking at all old and rare books in the Rare Book Hub Transaction Database that brought at auction $650 in 1968, they have on average increased in value to $8,828 today, a nice annual increase of 5.47% compounded, but hardly the mind-bending 14.17% this incandescent map has.

The Pooh stories have aged well, very well in fact, and this map, an important original illustration of the series, has become an icon.  So, if you loved these stories and have had money to burn, what nicer thing to have on your wall than this important, easily identifiable original illustration.

For five generations Winnie-the-Pooh has been required listening if not reading for a large audience of English speakers and slowly this children’s tale has grown in stature as generation after generation have told and retold the Pooh stories.  As luck would have it, today, many of those once children have grown into the women and men that collect and many collect material that resonated with them when they are small.

For them, this is a rare gem and a keeper.

The future of this collectible will rise and fall with interest in the Pooh series.  At the recent Comic-Con in San Diego books and artwork have had their place but today’s youth seems far more taken with interactive electronics and comic book and movie impersonation.  As to how many visitors came dressed as Winnie-the-Pooh I suspect not many for the timeless characters of A. A. Milne, while aging well, more resonate with those of a certain age who now buys their bus tickets for half-price and their icons for six figures.