Arrests Made in $8 Million Theft from Pittsburgh's Carnegie Library 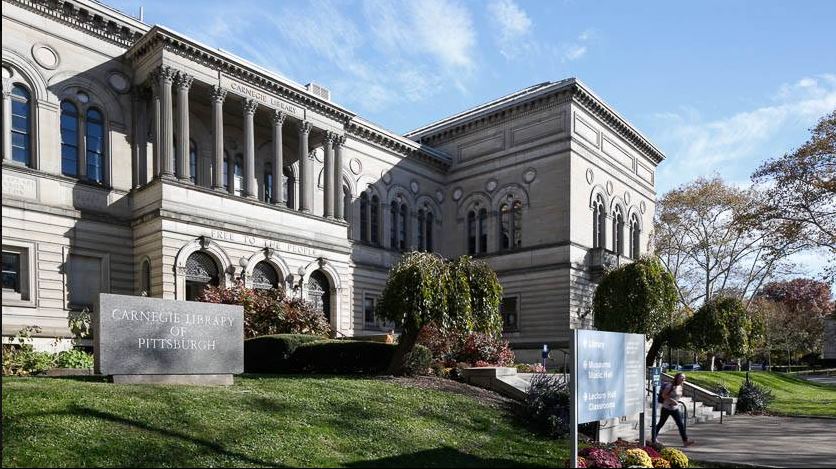 Arrests have been made in one of the largest book thefts in recent memory - an estimated $8 million-plus worth of books taken from the Carnegie Library of Pittsburgh. This was not a single heist but an ongoing flow that took place over two decades. As is often the case in such a large and long-running event, it was an inside job. On the inside was Greg Priore, who had been the library's archivist and head of the rare book room since 1992. Mr. Priore has been charged with theft, receiving stolen property, conspiracy, retail theft, library theft, criminal mischief and forgery. According to the criminal complaint, Mr. Priore has admitted to the thefts.

Also charged, from outside the library, is bookseller John Schulman of Caliban Books. He is charged with theft, receiving stolen property, dealing in proceeds of illegal activity, conspiracy, retail theft, theft by deception, forgery and deceptive business practices. According to the Pittsburgh Post-Gazette, which has closely followed this story, his attorney said only that "the complaint sets forth serious allegations and we are treating them as such." He also described Mr. Schulman as a "titan in the book community." Both men were well-respected in their fields, which would have made it easier for them to remove and sell the books without suspicion, yet it is still hard to imagine such a massive theft going on for so long without anyone noticing.

According to the complaint, and much of this is based upon Mr. Priore's word, the arrangement began in the 1990s. Priore had financial burdens, including sending four children to college, and made the worst decision of his life. He does not remember specifically what he first removed, likely a map, from the Oliver Room (the rare book room) he managed. Mr. Priore then brought the items to the Caliban Book Shop, only a block away, that he passed going home from work everyday. There, he claims to have found a willing partner in Mr. Schulman.

The arrangement continued for over two decades. Mr. Priore would bring books when he needed funds. He said Mr. Schulman encouraged him to bring more, in time telling him which books he would like him to remove from the library. Priore claimed that Schulman "goaded" him on, and made substantially more money on the thefts then did he. However, Priore also said that when he learned an audit would take place that was likely to reveal the thefts, he told Schulman he would take the blame, but that the latter said, "No, I was in on it too."

In late 2016, Mr. Priore said he became aware that the library was planning an audit of the rare book collection. We do not know whether this was caused by someone's suspicions or was more of a routine decision. There were cases of people expressing concerns about behavior or statements made by the suspects in the past, but it is not clear whether any of these concerns were expressed prior to the criminal investigation. Priore says he warned Mr. Schulman of the audit and stopped removing books from the library. Some attempts at covering tracks were made, but the implication is that the parties realized that hiding the thefts would be difficult if not impossible.

The Carnegie Library hired Pall Mall Art Advisors to conduct the audit. They determined that around 300 items had been stolen, and another 16 were damaged or made virtually worthless by having maps or pages removed from them. Pall Mall was the one who estimated the size of the loss at just over $8 million. The audit was conducted in April 2017, and Mr. Priore was terminated from his employment not long thereafter. Investigators were called in, and with assistance of Christiana Scavuzzo of Pall Mall, they entered the Caliban warehouse that summer and determined $258,000 worth of Carnegie material was there. Ms. Scavuzzo matched items against Carnegie inventory and used identifying signs, such as shape of cut marks or matching discoloration where pages were removed from Carnegie books. The district attorney's complaint says among the items found were numerous plates from Edward Curtis' massive North American Indian Portfolio, 1,500 of which were found to be missing from the library. Records, it says, show Caliban listed 231 such photographs on eBay, received 171 payments for them, and had another 42 sales receipts for Curtis photographs dated from 2009. An interview with Mr. Priore in 1996 with Carnegie Museums of Pittsburgh's magazine indicated a set of Curtis folios was the last item purchased by the rare books department, in the 1960s (it still received gifts).

The most notable stolen item was a first edition of Isaac Newton's Principia Mathematica. It had been sold to a British bookseller. It had Carnegie Library markings on it, but the British dealer said Schulman told him it was a deaccessioned second copy. Since he purchased another Carnegie Library item with a deaccession letter that day, the British bookseller thought the Newton book was deaccessioned as well. That book has since been returned to the Carnegie. The most valuable item still missing is a George Washington journal valued at $250,000. It is generally believed that much of the material, especially those items sliced apart, will never be found.

The Carnegie Library of Pittsburgh released the following statement in response to the indictments: "We are grateful the investigation into the Oliver Room theft is moving forward, however we are deeply disappointed that two people we knew well and trusted are at the center of this case. We look forward to the appropriate individuals being held accountable to the fullest extent of the law. We have been asked not to comment further until legal proceedings are complete, which could be another 6-12 months. At that time, we look forward to telling our story. The District Attorney will release information as appropriate as the case progresses through legal proceedings. We would like to thank our community for their support throughout this lengthy and complex investigation."

Library theft, and the consequent selling of such stolen materials by those in the trade, is hardly anything new. Libraries everywhere have been increasing their security, but as this case from a major library attests, it has not been quick enough. Bookseller organizations now provide stolen book locating services, but again, this has not been enough to keep up with the sale of stolen copies. What makes this case so difficult and disheartening is that it involves two respected and trusted individuals in the field. Priore told investigators he did little to disguise his removal of objects. Books would be taken out under his arm, maps either placed in a folder or rolled up if too large. No one suspected anything was wrong. They trusted. Ronald Reagan is famous for his quote, "trust, but verify," but that was said of a known foe, not a highly respected friend or colleague. More verification and less trust is the necessary order of the day, but it is a sad turn of events. There was a time when a simple handshake was a bond of integrity.

On their website, Caliban states, "Caliban Book Shop is a proud member of the ABAA [American Antiquarian Booksellers Association] and ILAB [International League of Antiquarian Booksellers], conforming to their high standards of business practice and ethical conduct." The ABAA, through its President, Vic Zoschak, issued the following statement: "This morning, the ABAA leadership learned that Greg Priore, former Carnegie Library Archivist, and ABAA member John Schulman of Caliban Books, have been charged with theft from the library. This is a truly regrettable situation for the larger book community, and one in which the Association shares the public’s dismay that such a theft took place. At this point in time, to comment further would be premature, as we support the legal process currently being pursued and will await its outcome. During this period we will continue to closely monitor the developments concerning this serious matter."

It may be only a few who participate, but everyone gets a black eye. Libraries and booksellers will be faced with having to do more if their reputations are not to be tarnished by the wrongdoings of rogue associates.