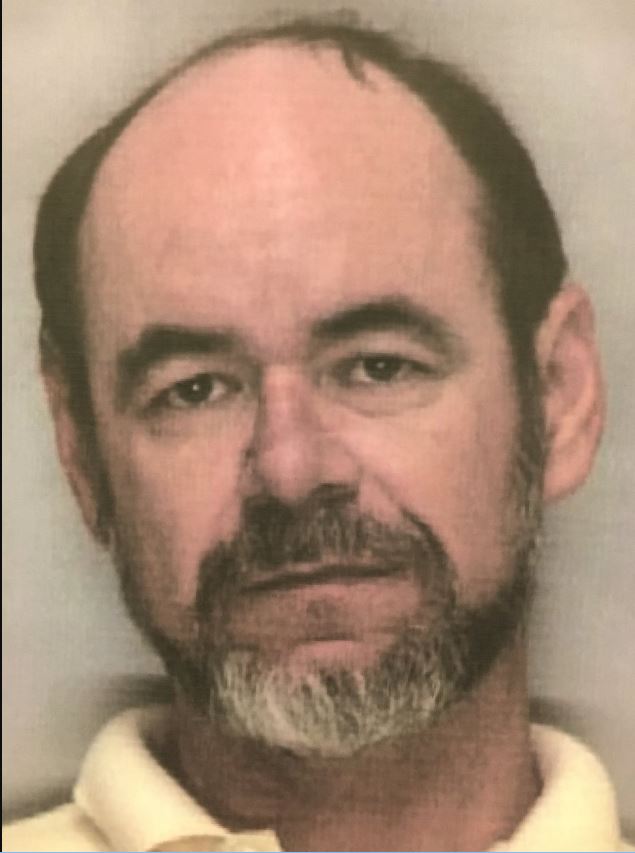 Stephen Crawford at the time of his arrest for book theft in 1992 (Santa Clara County Sheriff's photo).

Over 25 years ago, police made an arrest in a case of 200-300 books stolen from Stanford University. On April 25, 1992, Stephen Blake Crawford was arrested on charges of stealing books, photographs, and ancient artifacts from the Stanford University Libraries and Department of Anthropology. The books were quite valuable, having been taken from the rare book department, including leather-bound Latin texts dating from the 16th century. It is not clear whether a total value was ever determined or if all of the books were returned.

The crime actually dates back much farther than that. It occurred almost 20 years earlier. Crawford was a security guard at the university during the mid-1970s. There was no sign that he ever sold any of the books or artifacts he took, despite their substantial value. According to a news release from Stanford University in 1992, a Stanford police officer said Crawford "just liked old things."

Crawford pleaded no contest to receiving stolen property. It was classified as a felony as the value of the stolen goods was estimated somewhere in the hundreds of thousands of dollars. However, he was given only a six-month suspended sentence, provided he completed a work program and two years of probation. Evidently, he completed the requirements as he was never rearrested.

This was the only arrest and conviction or plea on Crawford's record in the seven-plus decades of his life.

On June 28, Crawford, now 72, took his own life. Detectives had come to speak with him at his apartment in San Jose. He had lived there ever since 1993, the year after his arrest for the stolen books. The officers knocked on his door, and then entered with a key when they believed Crawford was stalling for time. They discovered him on a couch, gun in hand. The officers backed away, but rather then shooting at them, he turned the gun on himself, taking his own life.

It turns out that while the book theft was the only crime on his record, police believed he was guilty of a far more serious offense. Also dating back to his time as a Stanford security guard, Crawford had long been a suspect in a brutal murder at the university in 1974. Arlis Perry, a 19-year-old student at Stanford, had walked to the mailbox with her husband of only eight weeks at 11:30 in the evening. They had a spat, apparently over who would fill a soft tire on their car. Arlis Perry decided to go to the chapel that stayed open late to pray or meditate. When she didn't return home by 3:00, her husband, also a student, called the campus police.

Crawford, the security guard, said he had locked up the chapel that night. When Mr. Perry called, he said he thought maybe she was still in the church, but all the doors were locked. When he returned to open the chapel at 5:45, he said he found a door unlocked. Inside, he found Ms. Perry's body. She had been sexually assaulted, and her head was struck with an ice pick. She was dead.

Various theories were put forward at the time. The use of the ice pick made some think it was some sort of ritual killing. Some far out theories, such as the notorious Son of Sam as killer, were raised, though he was thousands of miles away in New York. At the top of the suspect list, naturally, was Ms. Perry's husband. However, he cooperated fully, provided a DNA sample, and was dropped from the list of likely suspects. Crawford, who refused to give such a sample, remained on the list. Detectives obtained his DNA from items he had thrown away.

Over the years, Crawford remained a suspect in the cold case, but police did not have enough evidence to charge him. However, in time, techniques for testing and matching DNA substantially improved. They still had the suspect's DNA found on Arlis Perry's body, and with advanced technology, were able to match it up with that of Crawford. They even went to the length of tracking down others who had been at the church that night for their DNA samples to be certain.

In 2016, detectives last interviewed Crawford, their suspicions renewed. After that meeting, Crawford wrote a suicide note, but rather than following through, kept it in his apartment for the day he felt his time was up. In it, he admitted to nothing. When detectives came knocking a few weeks ago, Crawford must have concluded his time had come, that they finally had the proof they needed. Rather than wait to hear more, Crawford chose to end his life.