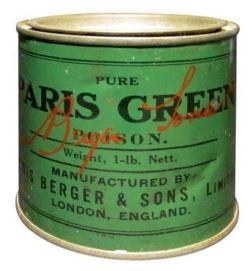 Researchers at the University of Southern Denmark's library made a startling discovery recently about three of their 16th and 17th century books. Their covers are filled with poison. To be exact, they contain serious concentrations of arsenic. The bindings are probably more recent, likely the 19th century. Still, there are no murderous motives here, no makings of an Agatha Christie mystery. Arsenic was regularly used for a variety of purposes in those days.

The discovery came innocently enough. Bookbinders in past times often used paper or velum from even older books and manuscripts in their bindings. Those older books were just trash then, but today, it is often the case that the books they bound are of less interest than the older material used in the bindings. They may hold lost or unique writings that fill gaps in human knowledge. Still, the libraries or other owners who hold these books don't necessarily want them torn apart. The answer is to use modern, x-ray technologies that enable researchers to look through the covers and read the ink on the pages used in those bindings.

In the case of the books at the University of Southern Denmark, researchers discovered there was old parchment used in the bindings. Unfortunately, the x-rays were having a hard time reaching the elements used in writing the letters. There was a wall of green paint in the way. The x-rays revealed that the green paint was made from arsenic. It is most likely what is known as "Paris green" or "emerald green,"a substance that was used both as paint and poison. That was an unfortunate combination as it led to the use of a poisonous substance on items regularly handled by humans.

Among its uses as paint, Paris green was commonly used in wallpaper in the 19th century. People didn't realize its dangers. Even as they became aware of its toxic qualities, the belief remained that as long as you didn't lick your wallpaper, you would be all right. Unfortunately, it is not quite that simple. Notably in England where the pigment was commonly used and damp weather is abundant, mold can grow on the paper. It releases a toxic gas which contains the wallpaper's arsenic. Children were literally dying in their bedrooms. It is one of the reasons why people believed drier weather to be healthier. They became ill in their wallpapered homes in a damp climate, but not where dry weather prevented mold from growing.

Other places where the pigment was used included paintings. If you have an impressionist painting with shiny green, you should refrain from licking it. Clean with a soft, dry brush instead. Various other products regularly touched by humans, who might then put their fingers in their mouths, included items that can be worn, or toys children used for play.

Meanwhile, Paris green had another use. The reason it was most commonly known as Paris rather than emerald green is they used to throw it in the Paris sewers to kill the rats. People regularly kept some in their homes for that purpose. Later on, it was commonly used as an insecticide on crops. It was sprayed on apples and other fruits to prevent worms. In America, it was used to control the native Colorado potato beetle, noted for destroying potato crops. It was used in spray to kill gypsy moths invading northern forests and disease-carrying mosquitoes. It was applied to kill moths that attack tobacco plants, giving you a chance to smoke as well as eat the substance.

So, why was Paris green used in a bookbinding? Obviously, not for its color, since however attractive it may be, the arsenic paint was buried under the covers. Most likely, it was applied to prevent insect damage. Just as it can keep worms from boring through apples, arsenic can keep bookworms from boring through books. Now all it needs is a layer of asbestos in the covers and the books can be safe from fire damage too.

The Danish library will now store its poisonous books in separate boxes in a ventilated cabinet. It also plans to digitize the books so they don't have to be physically handled. Of course, the computers and monitors you use to view those digitized copies are probably laden with toxic heavy metals such as lead, cadmium, and mercury. There is no escaping the environment. You pick your poison.

The complete story of the discovery by Jakob Povl Holck and Kaare Lund Rasmussen of the University of Southern Denmark can be found on the website of The Conversation.