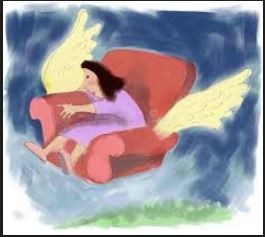 Live out your bookish fantasies as an armchair traveler through the Facebook pages of booksellers.

I guess we all have streak of the armchair traveler in us, and I’m no different. When I lived on the Mainland I got my needed doses of books, book shops and book sellers in the old fashioned way, I went for a visit.

Personally, I'm still a book seller; I’ve lived on Maui for the last 42+ years and it's still more than 2,000 miles in all directions from the nearest land mass. To be perfectly frank not exactly the ideal place for "a life of the mind." Now tottering through my 70s it’s been literally years since I’ve been on an airplane or off the rock. So while there is no substitute for the real thing, Facebook does provide a virtual substitute, as well as some delicious fantasy peeks into the lives and interests many talented dealers.

For the life you always dreamed about but never quite attained, the one where you spend a lot of time flying first class to international destinations and exhibiting your exquisite high end wares, may I recommend Barry Ruderman, Antique Maps, based in La Jolla, Ca. When you follow him on Facebook you’ll find he’s not home very much.

While this July the rest of us were wringing our hands about the state of the nation and wondering if the next Hawaii nuclear missile alert will be the real thing, there was Barry, looking young and fit, exhibiting at the Miami Map Fair. He was on the ground in London during June, spending most of May in Italy and sending back beautiful pictures of old towns, ruins, a gigantic glass case filled with elaborate pastry, mixed in with numerous seaside stops for food and drink.

For Ruderman it was April in Santa Fe, London, and Greece. There he is dressed in red at the birthplace of Zeus and visiting Delphi. Did I mention he manages to fit some scenic skiing into his busy schedule? He also shares interesting links to mostly map related people, places, and events. All of it blessedly bucolic and almost entirely devoid of life's harsher realities. Is it any wonder his page is high on my list of fantasy lives?

Comes next Ian J. Kahn, of Lux Mentis based in Maine, who spends almost as much time airborne as Barry and going to just as many interesting places: there’s the book show in New York City and the other one in Pasadena, and the recent road trip via many eateries to New Orleans.

Currently Ian has 1,213 Facebook friends. His page frequently shows how his booths and exhibits evolve, and they’re always fascinating and filled with things I'd love to have, but maybe a bit over my bottom-feeder budget. While he’s in transit he never stints on the food and beverage encountered along the way.

Besides his book business he has a large and interesting family encompassing several generations, all of them talented, bookish and they eat well. In the wardrobe department Ian personally favors kilts, musically it's punk bands. Outdoors it's lovely gardens, and food, well it's endless. He recently posted “before” and “after” photos of a huge boneless leg of lamb (Be still my beating heart - it looked so good), banana bread from scratch and other homemade edibles. There seems to be no limit to the Kahn larder and culinary skills.

Before you go dashing off to friend him, just a note of caution: Ian J. Kahn is prolific and he might post 10 or 20 times and day and since a certain world leader numbered 45 came to office he has appeared in every guise possible on the IJK facebook page including as a leather slave of a certain other world leader whose initials are VP.

So to get to the fantasy life -- like the video showing adorable tots from the Flakefleet Primary School in the UK as they root, march, cheer and wave the flag for England in the World Cup, you have to wade through ever larger doses of ever more unpleasant reality with which all of us here in American rare book land are already only too familiar. But just in case you’ve been living in that proverbial cave there’s been deportation, immigration debacles, children in cages, mass gun violence, racism, misogyny, fake news, the FBI, Russia, a doubtful Supreme Court nomination and that’s just in July.

Another life in books I enjoy following is Alexander Aikin of Bolerium Books in San Francisco’s Mission district. Bolerium is one of those sprawling eclectic bookstores housed on the second floor of what used to be a seedy neighborhood, now rapidly gentrifying. The shop specialties include lefty politics of all nations, ethnic and multicultural studies, labor history, LBGTQ books plus there’s ephemera galore. Some of the niftier examples of what's in stock manage to wind up on his Facebook page.

The Akin family has two young children who are are learning Chinese (among many other things). So along with oodles of interesting pictures of the odd bits that turn up at Comrade Alex’s shop, there is also the unfolding narrative of how hard it is to get nice American kids into bilingual Chinese language schools, which it seems are bursting at the seams with wealthy expats and others who desire to be fluent in the language of the coming leadership.

Alex, a man with wide ranging tastes, always has photos of interesting antique coins or carved seals, and I also seem to remember an occasional homage to Tom of Finland and other work in that vein.

There’s never a shortage of excitement in the Mission, and although he does not travel as widely as Barry Ruderman or Ian Kahn, he did recently drive to Palo Alto, reporting the book scouting there was slim pickings. I loved his recent photos from Yosemite, and he’s no slouch in the food pix department either, his photos heavily to home cooking Chinese style. All of it looks good.

Also in the left-leaning but varied and interesting book category is the Facebook page of Lynn Deweese Parkinson based in Tijuana, Mexico. It helps to remember your high school Spanish because Lynn (a man) posts in both Spanish and English. Along with the substantial amount of literary and book related events happening in and around Tijuana, there’s lots of South of the Border political commentary, details of the recent renovations of the family home, occasional references to surfing, and it is not unknown to have a vision quest or two described from time to time.

I’m not exactly sure if I’d want to do a vision quest on my own, but I certainly enjoy eavesdropping on those who are up for the experience.

Not all the dealers I follow are men, some women with interesting lives and eclectic tastes are Kara Accettola, Little Sages in Ft. Lauderdale, Heather O’Donnell, Honey and Wax in Brooklyn and most recently newcomer Allison Devers, Second Shelf from London. All of them have stylish and interesting pages and often a good deal of charming family content as well.

Another woman I follow with interest is Oklahoma’s Lisa Rutherford. Lisa is not a bookseller, but as an artist who works as an interpreter of Cherokee historical material. I find her page well written, visually stimulating and fascinating. It gives a very personal  glimpse into a rich Native American historical and cultural vein. It’s harder than you might think to do good historical interpretation.

As for my own Facebook page, I must confess it has very little book content, that’s because these days most of my friends live right here on the rock with me and reading, well, for them, it’s maybe not so much. But if you find local and Hawaii state politics fascinating -- by all means look me up for  a detailed wonky description of the Aloha state’s most exciting primary elections (coming up Aug. 11) and aiming for regime change. From time to time I'll post some news about the overpriced local real estate market. But personally, if books are your thing, any of the others previous people would be much more interesting.

Some links to the Facebook pages of the people mentioned in this article: